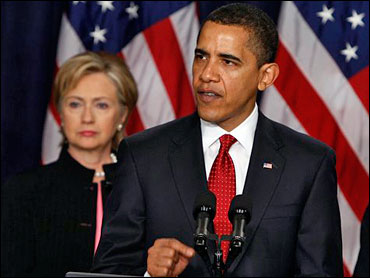 In a war that still has no end in sight, Mr. Obama said the fresh infusion of U.S. forces is designed to bolster the Afghan army and turn up the heat on terrorists that he said are plotting new attacks against Americans. The plan takes aim at terrorist havens in Pakistan and challenges the government there and in Afghanistan to show more results.

Mr. Obama called the situation in the region "increasingly perilous" more than seven years after the Taliban was removed from power in Afghanistan.

"If the Afghanistan government falls to the Taliban or allows al Qaeda to go unchallenged," Mr. Obama said, "that country will again be a base for terrorists."
(Read text of President Obama's remarks.)

He announced the troop deployment, as well as plans to send hundreds of additional civilians to Afghanistan, with Secretary of State Hillary Rodham Clinton, Defense Secretary Robert Gates and top intelligence and national security figures at his side. The announcement followed a policy review Obama launched not long after taking office.

The 4,000 troops bolster the dispatch of an additional 17,000 forces to the war-weary nation.

Afghanistan President Hamid Karzai welcomed the additional help to train his country's army and police force, saying in a statement that Obama's strategy "will bring Afghanistan and the international community closer to success."

In Afghanistan, Taliban forces are preparing a "surge" of their own - in response to U.S. plans, reports CBS News chief foreign affairs correspondent Lara Logan. Here, they're practicing for a planned ambush on U.S. forces - parading their weapons for CBS News' camera.

Asked about U.S. plans to send more troops, the senior Taliban commander warned: "We don't care if they send 20,000 or 50,000. The more troops they send, the more casualties they suffer."

A consultant to the president's national security team, Dr. John Nagel, says they are well aware of the sacrifices it will take, Logan reports.

There are clear risks and costs to Mr. Obama's strategy.

Violence is rising. The war in Afghanistan saw American military deaths rise by 35 percent in 2008 as Islamic extremists shifted their focus to a new front with the West. Mr. Obama's plan will also cost many more billions of dollars.

And the president's plan includes no timeline for withdrawal of U.S. troops.

Yet Mr. Obama bluntly warned that the al Qaeda terrorists who masterminded the Sept. 11, 2001 attacks were actively planning further attacks on the United States from safe havens in Pakistan. And he said the Afghanistan government is in peril of falling to the Islamic militants of the Taliban once again.

"So I want the American people to understand that we have a clear and focused goal: to disrupt, dismantle, and defeat al Qaeda in Pakistan and Afghanistan, and to prevent their return to either country in the future," the president said.

"That is the goal that must be achieved," Mr. Obama added. "That is a cause that could not be more just. And to the terrorists who oppose us, my message is the same: we will defeat you."

Mr. Obama's plan will put more U.S. troops and money on the line. He said Pakistan and Afghanistan will be held to account, using benchmarks for progress, although those measures are just being developed and the consequences if not met remain unclear.

The president spoke just hours after a suicide bomber in Pakistan demolished a mosque packed with hundreds of worshippers attending Friday prayers near the Afghan border, killing at least 48 people and injuring scores more, in the bloodiest attack in Pakistan this year. Rising violence in Pakistan is fueling doubts about the pro-Western government's ability to counter Taliban and al Qaeda militants also blamed for attacks on Western troops in Afghanistan.

The Pakistani central government has relatively little control in some areas bordering Afghanistan and has tolerated or even ignored the creation of Taliban and al Qaeda havens inside Pakistan.

In a direct challenge, Mr. Obama said Pakistan must show a commitment to hunt down the extremists within its borders.

"We will insist that action be taken one way or another when we have intelligence about high-level terrorist targets," Mr. Obama said.

Mr. Obama called the mountainous border region of Afghanistan and Pakistan "the most dangerous place in the world."

"This is not simply an American problem - far from it," Mr. Obama said. "It is, instead, an international security challenge of the highest order. Terrorist attacks in London and Bali were tied to al Qaeda and its allies in Pakistan, as were attacks in North Africa and the Middle East, in Islamabad and Kabul. If there is a major attack on an Asian, European, or African city, it, too, is likely to have ties to al Qaeda's leadership in Pakistan."

The president added: "The safety of people around the world is at stake."

That strategy fits with Mr. Obama's operating premise - that the U.S. failed mightily in the years following the Sept. 11 terror attacks by focusing on Iraq instead of Afghanistan. He said he is sending in the 4,000 military trainers after military commanders watched their demand for such help go unmet for years.

His moves come ahead of a U.N. conference on Afghanistan next Tuesday in The Hague, where Clinton will join representatives from more than 80 countries. And Mr. Obama himself is attending a NATO meeting next week in France and Germany.

At that meeting, the U.S. expects some NATO coalition members to commit more forces to the flagging war in Afghanistan, Obama officials said Thursday. They did not provide specifics.

Roughly 65,000 international forces are in Afghanistan, more than half from the U.S.

One part of Mr. Obama's plan is to expose fractures in the Taliban in hopes of weakening it.

Administration officials say the most difficult part of their approach will be in dealing with Pakistan, an often chaotic place with an erratic relationship with the United States. The administration will seek to bolster the democratic government of Pakistan, and try to get the people of that country to see the U.S.-led effort as one that is in their interests.

Mr. Obama also will call for increasing aid to Pakistan as long as its leaders confront militants in the border region. The president will work with Congress on language to attach conditions to military aid, sources said.

The U.S. will launch an intensive and expanded diplomatic effort to gain international cooperation, including reaching out to Russia, China, India, Saudi Arabia and even Iran.

The 4,000 military trainers that Obama is sending to Afghanistan will come from 82nd Airborne Division at Fort Bragg in North Carolina. All the troops he is dispatching to Afghanistan, including the combat troops, will be there by fall.