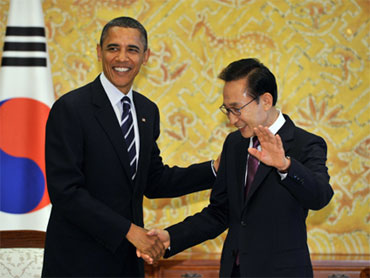 Despite intense efforts, the United States and South Korea failed Thursday to conclude a long-sought free-trade deal, a setback for President Barack Obama as he confronts tensions abroad and at home on a series of economic fronts.

The trade pact was one prize American officials would have liked to bring home from the president's 10-day trip to Asia. Instead, Obama could merely pledge that negotiations would conclude in weeks rather than months.

Denied the deal sought by U.S. business, Obama also was forced to defend policies to climb out of the deep economic slump against foreign suspicions that the U.S. is engineering a weak dollar.

If that was not enough, Obama also was forced to confront critics, including leaders of his own Democratic Party, who denounced proposals by the chairmen of a bipartisan commission he assembled to recommend solutions to the nation's burgeoning deficits and debt.

"Before anybody starts shooting down proposals, we need to listen, we need to gather up all the facts, we have to be straight with the American people," the president said in Seoul.

All in all, Thursday's developments summed up the problems and conundrums facing a president weakened by election results, reeling from a domestic unemployment rate that stubbornly won't budge from 9.6 percent, and facing a restive international community suspicious about the U.S. response to its economic crisis.

"The most important thing that the United States can do for the world economy is to grow because we continue to be the world's largest market and a huge engine for all other countries to grow," he said in a pointed rejoinder to critics abroad.

He declined to comment on the proposals released Wednesday in Washington by the chairmen of his deficit commission, saying he wanted to wait for the final report.

The commission's bipartisan co-chairmen proposed politically painful cuts in Social Security benefits, deep reductions in federal spending and higher taxes for millions of Americans to stem a flood of red ink that they said threatens the nation's future. The proposals drew swift condemnation, including House Speaker Nancy Pelosi's conclusion that the ideas were "simply unacceptable."

"If people are in fact concerned about spending, debt, deficits and the future of our country then they're going to need to be armed with information about the kinds of choices that will be involved and we can't just engage in political rhetoric," Obama said.

The president is on the third stop of a four-country visit to Asia seeking greater access to the region's markets for American goods, something he hopes will help spur job creation at home.

On North Korea, Obama said the reclusive communist nation must show a "seriousness of purpose" before the U.S. will restart six-party talks aimed at curbing the country's drive to become a nuclear power.

Earlier in the day in a speech marking America's Veterans Day, Obama condemned North Korea for continuing on "a path of confrontation and provocation" that he says deepens its isolation from the world and worsens the poverty of its people.

The visit to Seoul included the trade talks Thursday with South Korean President Lee Myung-bak and a meeting Friday of the Group of 20 economic powers. And Obama held individual private meetings with Chinese President Hu Jintao and German Chancellor Angela Merkel, two leaders whose governments have been among the critics of a recent decision by the U.S. Federal Reserve to buy $600 billion in bonds in hopes of invigorating the economy by freeing up more credit.

China and Germany fear the U.S. is engineering a weaker dollar to boost trade, a charge the U.S. has been making against China.

"We will never seek to weaken our currency as a tool to gain competitive advantage or to grow the economy," Geithner said on CNBC.

Obama also emphasized the need for countries like China that have relationships with North Korea to impress upon the isolated communist nation the need to refrain from provocative actions against South Korea, the White House said.

Brainard said there was a "glancing reference" to the Fed decision in Obama's meeting with Merkel. Scathing comments about the Fed move from Germany's finance minister uncorked criticism from around the world in recent days. Brainard said Obama and Merkel agreed on the need for leaders to discuss a framework for addressing large imbalances between the world's economies.

The dominant issue of the day, however, was what didn't get done — the trade pact with South Korea.

At issue is an effort to slash tariffs and other barriers to trade, one that was signed in 2007 when previous administrations were in power. It remains unratified by lawmakers in both countries. Sticking points include access to South Korea's market for American beef and autos.

Ron Kirk, the U.S. trade representative, rejected characterizations that the failure to agree on trade was a setback or defeat for Obama.

"The president's leadership on this has put us much closer to a successful closure," Kirk told reporters.