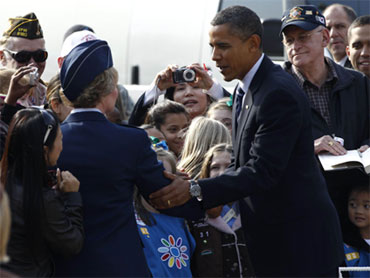 On the 60th anniversary year of the start of the Korean War, Mr. Obama told veterans of the conflict, "We remember. We remember your courage. We remember your sacrifice. And the legacy of your service lives on in a free and prosperous Republic of Korea."

The president spoke to the veterans and thousands of troops who still guard the tense border with North Korea. Mr. Obama is in South Korea for the annual G20 Summit. He reminded the audience at Youngsan Garrison that since the war ended where it began at the 38th parallel, some used the phrase "die for a tie" to describe the sacrifice.

Bill MacSwain, president of the Korean War Veterans Association, is among the former soldiers who still believe, "Our war was of course a forgotten war." The Fort Worth, Texas, man told CBS News, "The public forgot about it and so did the veterans."

He thinks the veterans forgot "because when they came back they suddenly found that not too many people in the United States knew what the Korean War was all about and how really tough it was."

Six decades later, MacSwain says there are Korean War vets who still suffer from Post Traumatic Stress Disorder and pain from cold weather injuries suffered during the harsh Korean winters. He describes the war as "a stigma in our history."

North Korea is a big part of the stigma MacSwain mentions. Mr. Obama warned, "Pyongyang should not be mistaken: the United States will never waver in our commitment to the security of the Republic of Korea."

Deputy National Security Advisor Ben Rhodes said the U.S. military presence in South Korea "is as necessary as it's ever been."

Longtime Korea watcher Mike Green, an expert with the Center for Strategic and International Studies, thinks the unpredictable North is watching to see if Mr. Obama has been weakened by the outcome of the recent midterm elections. Green told CBS Radio News U.S. adversaries "in the past have over-interpreted these kinds of electoral results as a sign of collapsing leadership." Green suggests the president should "push back" against any notion that he's "weaker."