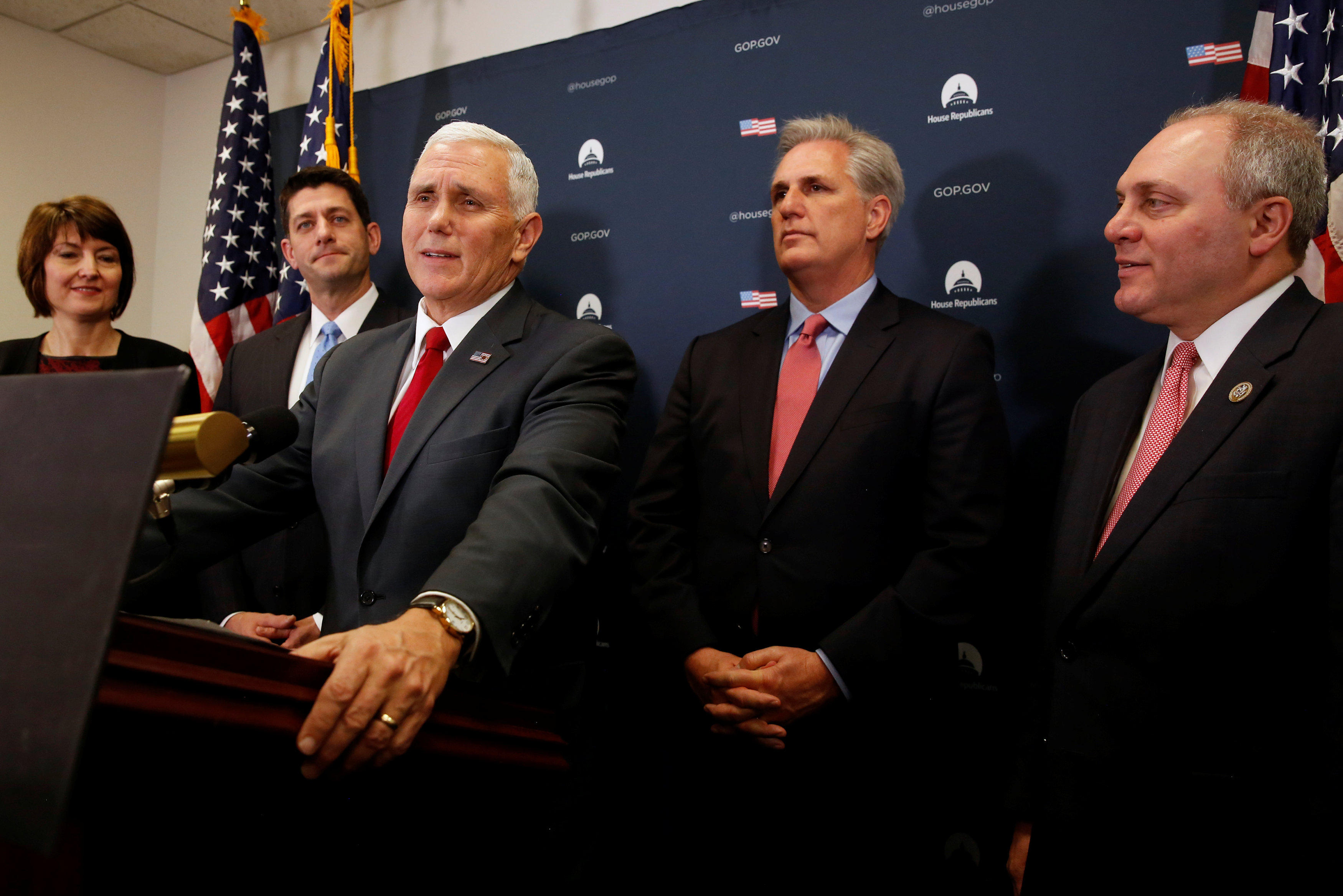 Pence conveyed that message in a closed-door meeting during a visit to Capitol Hill and spoke about it at a press conference afterward, but he didn’t elaborate on what that would entail, since it will be up to the Republican-controlled Congress to dismantle the law that passed when Democrats controlled Congress.

“The American people have spoken,” Pence said. “They want to see us repeal and replace Obamacare.”

Mr. Trump’s advisers Kellyanne Conway, Stephen Miller, Rick Dearborn and his incoming White House chief of staff Reince Priebus attended the meeting, according to a source in the room.

Some lawmakers exiting the meeting were discussing a possible Feb. 20 deadline to send Mr. Trump a bill that would repeal the healthcare law, but AshLee Strong, spokeswoman to Speaker Paul Ryan, R-Wisconsin, disputed that date.

Asked if Republicans plan to pass a repeal bill immediately but delay its effective date for a few years until a replacement plan is developed, she said, “That’s incorrect. Our goal is to provide relief from this law as soon as possible, and we have not detailed a hard deadline.”

Pence said that the “first order or business” for the new administration would be to repeal and replace Obamacare. Pence and Ryan, however, emphasized that they did not want to “pull the rug out from under” Americans who were dependent on the program.

“We don’t want people to be caught with nothing,” Ryan said.

Just as Pence entered the Capitol, Mr. Trump began tweeting about Obamacare, and he warned Republicans to be “careful” because Democrats will have to “own” the effects of the health-care law.

At the same time, in another part of the Capitol, President Obama made a rare visit to huddle privately with House and Senate Democrats about the best way to defend his signature health-care law.

Following the meeting that lasted more than an hour, Mr. Obama said his advice to Democrats was to “look out for the American people.” Some Democrats tweeted photos and a few quotes from inside the room as the president spoke to them.

Senate Minority Leader Chuck Schumer, D-New York, said at a news conference after the meeting that once Republicans repeal Obamacare, they are the ones who will own responsibility for the nation’s health care.

Rep. Louise Slaughter, D-New York, said Mr. Obama did not broach the idea of Democrats working with Republicans on a replacement plan.

“We don’t even think about replacing the law. Our job is to save the one we got. We can improve it,” she said. “He talked about what this health care means to people. The letters and the things that he’s gotten from people who literally would have died without it.”

Republicans are aiming to use an obscure budget procedure called reconciliation to quickly pass legislation to repeal Obamacare.

Senate Budget Committee Chairman Mike Enzi, R-Wyoming, in fact, unveiled a resolution Tuesday for the repeal. The resolution includes reconciliation instructions to four authorizing committees that are tasked with finding at least $1 billion in deficit reduction over the next decade. It also calls for the authorizing committees to quickly report their proposals to the Budget Committee by Jan. 27.

CBS News’ Alan He, Catherine Reynolds and Walt Cronkite contributed to this report.