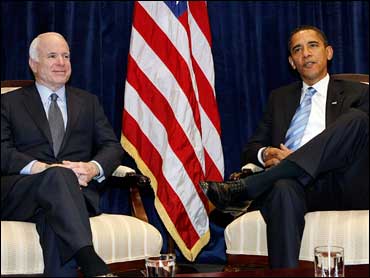 The two former rivals met in Obama's transition headquarters in Chicago. Mr. Obama said before the meeting that he and McCain planned "a good conversation about how we can do some work together to fix up the country, and also to offer thanks to Sen. McCain for the outstanding service he's already rendered."

When asked if he planned to help the Obama administration, McCain replied, "Obviously."

After the meeting, Obama and McCain issued a joint statement saying: "At this defining moment in history, we believe that Americans of all parties want and need their leaders to come together and change the bad habits of Washington so that we can solve the common and urgent challenges of our time."

"It is in this spirit that we had a productive conversation today about the need to launch a new era of reform where we take on government waste and bitter partisanship in Washington in order to restore trust in government, and bring back prosperity and opportunity for every hardworking American family," it said. "We hope to work together in the days and months ahead on critical challenges like solving our financial crisis, creating a new energy economy, and protecting our nation's security."

"As a matter of symbolism, the pictures of these two former rivals is important as Mr. Obama begins plotting the kinds of changes he discussed during the campaign," said CBSNews.com senior political editor Vaughn Ververs. "As a practical matter, John McCain is going to remain an important voice in the U.S. Senate on issues such as Iraq and it's never a bad idea to build that relationship."

For McCain and Obama, improving education, ethics reform, torture and the future of the U.S. detention facility in Guantanamo Bay, Cuba are all areas of potential cooperation, reports CBS News correspondent Dean Reynolds.

But will it be McCain, the bipartisan maverick who re-emerges in the senate, or the campaign conservative who might want to join fellow Republicans in frustrating the new president's plans?

"This is a man with a very rich appreciation of history and his place in history," says Jim Vandehei, executive editor at Politico.com. "And I think he'll want to fix any damage that he did in his campaign by ending on a high note in the Senate."

The meeting comes as Mr. Obama, who resigned his Senate seat on Sunday, has been interviewing some of his one-time political opponents to help him run the country.

Several times recently, Mr. Obama has noted Abraham Lincoln's decision to bring his political adversaries into his administration, reports Ververs. This was chronicled in great detail in the Doris Kearns Goodwin book, "Team of Rivals" - specifically three men who Lincoln surprisingly defeated for the Republican nomination in 1860. (Read more from Ververs on this in our Horserace blog.)

In an interview on CBS' 60 Minutes that aired yesterday, Mr. Obama said he had met recently with Sen. Hillary Clinton, who he battled in the Democratic primaries, but he would not reveal if she was up for a cabinet position.

"She is somebody who I needed advice and counsel from," Mr. Obama told 60 Minutes correspondent Steve Kroft. "She is one of the most thoughtful public officials that we have. Beyond that, you're not getting anything out of me Steve."

Mr. Obama also told Kroft he would have Republicans in the cabinet. But advisers to the former candidates have said they don't expect Mr. Obama to consider McCain for an administration job.

Mr. Obama and McCain clashed bitterly during the fall campaign over taxes, the Iraq War, and ways to fix the ailing economy. Things got ugly at times, with McCain running ads comparing Mr. Obama to celebrities Britney Spears and Paris Hilton and raising questions about his rival's distant relationship with a 1960s-era radical, William Ayers.

McCain delivered a gracious concession speech on Election Night, paying tribute to Mr. Obama's historic ascendancy as the nation's first black president. The two agreed that night to meet after the election when McCain called Mr. Obama to concede defeat.

In announcing the meeting on Friday, Mr. Obama's transition office said the president-elect and McCain "share an important belief that Americans want and deserve a more effective and efficient government, and will discuss ways to work together to make that a reality."