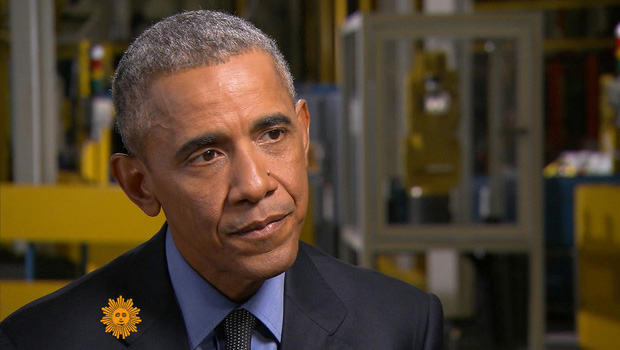 Eight years ago, candidate Barack Obama was campaigning for President, and our Lee Cowan was covering him. PRESIDENT Barack Obama has just under a year to go before leaving office, and he was in a reflective mood when Lee spoke with him in Detroit last Wednesday:

"That you wonder why you did this?" asked Cowan.

"Absolutely. And yet, there has not been a day that I have not walked into the Oval Office and understood that at no point in my life will I ever have the chance to do as much good and make as much of a difference in the lives of people as I do right now.

"And that's precious. And so I'm going to try to squeeze every last little bit of good work that I can while I still have the chance."

The president's visit to the Motor City this past week ("If you're looking for the world's best cars and the workers who make those cars, you need to be in Detroit, Michigan!") came exactly a year to the day that his successor -- whomever he or she may be -- will move INTO the White House, and the Obamas will move OUT.

The President seems especially conscious of that calendar -- he joked after touring the North American International Auto Show that the reason he came was to browse for a new car ("I tell you what, this is a spiffy car!"). After all, he'll soon have to say goodbye to the one he's using, which is a far cry, by the way, from any car -- let alone the one he used to have.

Cowan asked, "Do you remember the first car you had? What did you have?"

"The first car I drove was my grandfather's Grenada," Mr. Obama laughed. "Which was not a shining moment for Detroit! It was not a great car."

"Not a great date car, either."

"It was not cool," Mr. Obama laughed. "I had to compensate in my coolness, given the fact that I was picking girls up in the Grenada."

Although he was all smiles, this trip had a serious message. President Obama has been struggling to communicate his successes heading into his last year in office -- and the U.S. auto industry is one example.

Both GM and Chrysler had record sales last year -- a resurgence Mr. Obama says was the result of the government bailout during the first year of his administration. It wasn't a popular idea; critics thought the new president was over-reaching, even cocky.

But in hindsight, he says, that's just what the economic crisis demanded.

"I might have benefited from being young and a little brash and not being as scared as I probably should have been," he laughed. "You know, there was probably some benefit to me thinking, 'Oh, we can fix this. We'll figure it out.'"

By some measures Mr. Obama DID figure it out.

He's overseen shrinking unemployment, a growing job market, a reduction in the number of Americans without health insurance, and diplomatic breakthroughs on both climate policy and relations with Cuba.

But his foes say those gains have been overshadowed by the rise of ISIS, the trouble in Syria, and terrorism at home.

And what stands out even to his supporters has been his inability to be the unifying force that he had promised.

"The one thing that gnaws on me is the degree of continued polarization," he said. "It's gotten worse over the last several years. And I think that in those early months my expectation was that we could pull the parties together a little more effectively."

"Do you wish, in hindsight, that maybe campaigning on that notion of changing the tone in Washington, do you wish you hadn't campaigned as hard on that promise?"

"Well, here's the thing: That's what the American people believe. And that's what I still believe."

His final State of the Union seemed an effort to remind America that despite the exasperating negativity, the last seven years have not been as dismal, or dysfunctional, or as racially-divided as his critics maintain.

"You know, when I hear people say, for example, in the aftermath of Ferguson and some of the other cases, that race relations have deteriorated -- they're terrible -- I have to say, 'Well, maybe it's just 'cause I'm getting older, but they're not worse than they were after the Rodney King incident in L.A.," Mr. Obama said. "And they're certainly not worse than they were back in the '50s or the '60s. But we forget."

When he started his campaign for president, he was known less for his term in the Senate and more for a single speech he gave years earlier at the Democratic National Convention:

"There is not a liberal America, and a conservative America. There is a United States of America."

Few doubted his ability to stoke a crowd. In Iowa the crowds started small, but the end of 2008 his rallies had grown to sometimes tens of thousands -- a celebrity status his rivals often used again him.

His staff were mostly 20-somethings, many of whom remain by his side today -- a ride that, for them too, is about to come to an end.

"Now they're in their early 30s and they're startin' to have families, you know, got babies, and Uncle Barack's holding them and playing with them on the floor of the White House," the president said. "So I tell 'em, 'You know what? When we're on Marine One and we're flying and the Washington Monument's over there and the Capitol's in the background, look up from your smartphone for a second and think about this."

"Does that still get to you?"

"If you could run for a third term, would you?"

"No. I wouldn't," Mr. Obama said. "Number one, Michelle wouldn't let me! You know, this is a big sacrifice, and a great privilege, but it takes a toll on family life.

"This is a process in which the office should be continually renewed by new energy and new ideas and new insights. And although I think I am as good of a president as I have ever been right now, I also think that there comes a point where you don't have fresh legs. And you know, that's where you start making mistakes. Or that's when you start thinking that you are what's important, as opposed to the mission being more important."

"How much time do you wonder or spend thinking about what you have done might be undone if a Republican ends up in the White House?" Cowan asked.

"Well, you think about that," he replied. "But what you discover when you're president is that the institutions and programs and things that you have put in place and built, if you've done a good job and you've done them sensibly, you know, in some cases may need tinkering with, can be improved. But if they're good things, they're harder to undo than you think."

He admits there were policies under the Bush administration he disagreed with as a candidate, but once he viewed them inside from the Oval Office himself, he changed his mind.

"There are a bunch of things that we do to fight terrorism that, before I was president, I might have questioned, that when I look at it really carefully I say, 'On balance this is something that we need to do to keep us safe,'" he said.

There is a lot he'll miss about the job -- Air Force One, for example, isn't too shabby. But what he won't miss is what he calls the bubble of the office.

Cowan asked, "'When you're out at stuff like this, I mean, can you really enjoy it? Or is it always, because everything that you're at always becomes --"

"A scene," Mr. Obama continued. "Look, the bubble is the hardest thing about the presidency. And I don't think anybody with sense ever gets used to it. It's the thing that makes me happiest about my tenure coming to an end."

Where the Obamas will live and what they may do post-White House are all matters of great speculation.

But for now, the Senator who campaigned on being "fired up and ready to go" is now ready to see if history will be kind or not.

"When I turn over the keys to the next occupant, one thing I'm confident about, and maybe why I don't feel obliged to yearn for a third term, is I'm very confident I'll be able to say that things are a lot better now than they were when I came into office," Mr. Obama said. "And, you know, that's a pretty good eight years' worth of work."