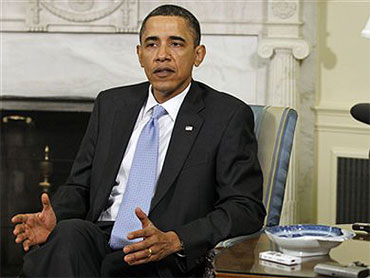 President Obama suggested Wednesday that a new value-added tax on Americans is still on the table, seeming to show more openness to the idea than his aides have expressed in recent days.

Before deciding what revenue options are best for dealing with the deficit and the economy, Obama said in an interview with CNBC, "I want to get a better picture of what our options are."

After Obama adviser Paul Volcker recently raised the prospect of a value-added tax, or VAT, the Senate voted 85-13 last week for a nonbinding "sense of the Senate" resolution that calls the such a tax "a massive tax increase that will cripple families on fixed income and only further push back America's economic recovery."

For days, White House spokesmen have said the president has not proposed and is not considering a VAT.

"I think I directly answered this the other day by saying that it wasn't something that the president had under consideration," White House press secretary Robert Gibbs told reporters shortly before Obama spoke with CNBC.

After the interview, White House deputy communications director Jen Psaki said nothing has changed and the White House is "not considering" a VAT.

Many European countries impose a VAT, which taxes the value that is added at each stage of production of certain commodities. It could apply, for instance, to raw products delivered to a mill, the mill's production work and so on up the line to the retailer.

In the CNBC interview, Obama said he was waiting for recommendations from a bipartisan fiscal advisory commission on ways to tackle the deficit and other problems.

When asked if he could see a potential VAT in this nation, the president said: "I know that there's been a lot of talk around town lately about the value-added tax. That is something that has worked for some countries. It's something that would be novel for the United States."

"And before, you know, I start saying 'this makes sense or that makes sense,' I want to get a better picture of what our options are," Obama said.

He said his first priority "is to figure out how can we reduce wasteful spending so that, you know, we have a baseline of the core services that we need and the government should provide. And then we decide how do we pay for that."

Speaking to CBSNews.com on Washington Unplugged ahead of his remarks at the Tax Day Rally last week in Washington, Ken Hoagland, Campaign Director for Online Tax Revolt, called the notion of a VAT in the U.S., "unthinkable."

"It hides the tax inside retail prices. We are already taxed enough," Hoagland told CBS. "It takes money out of the economy that could grow the economy and get us back to work and gives more money to government."

Volcker has said taxes might have to be raised to slow the deficit's growth. He said a value-added tax "was not as toxic an idea" as it had been in the past.

Since then, some GOP lawmakers and conservative commentators have said the Obama administration is edging toward a VAT.

CBSNews.com's Stephanie Condon took an in-depth look at how President Obama's policies had affected American taxpayers during the 2009 fiscal year. Contrary to what many believe according to polls, 98 percent of Americans actually paid less in taxes last year, due primarily to the federal economic stimulus legislation.