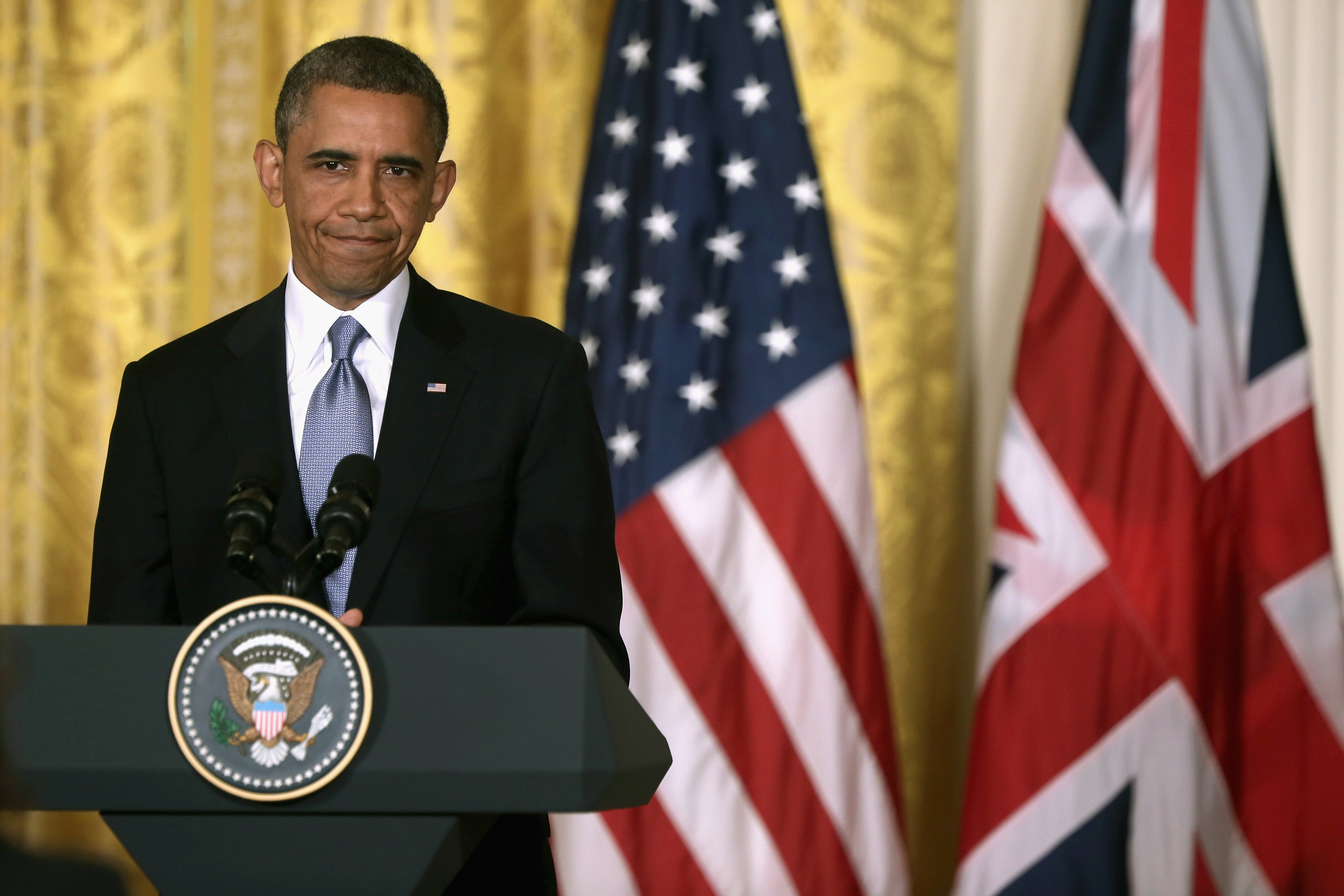 As lawmakers in Washington react to allegations that the Internal Revenue Service (IRS) regularly targeted conservative groups when reviewing their requests for tax-exempt status, President Obama on Monday vowed to find out "exactly what happened" at the IRS during the period under scrutiny - and vowed that any wrongdoers would be held "fully accountable" if found to be operating "in anything less than a neutral and non-partisan way."

Mr. Obama, speaking at a joint press availability with British Prime Minister David Cameron, said he first learned about the allegations last Friday, reading about them in "the same news reports that I think most people" did.

"This is pretty straightforward," Mr. Obama told reporters. "If in fact IRS personnel engaged in the kind of practices that have been reported on and were intentionally targeting conservative groups, then that's outrageous and there's no place for it."

The president said he didn't want to comment on the "specific findings" of the investigation until it was complete, but he insisted that any errant behavior would be punished.

"The IRS as an independent agency requires absolute integrity and people have to have confidence that they're... applying the laws in a non-partisan way," he said. "If you've got the IRS operating in anything less than a neutral and non-partisan way then that is outrageous ... People have to be held accountable and it's got to be fixed."

The Obama administration and the IRS have been under particular scrutiny since Friday, when the agency apologized for having singled out particular groups - particularly those believed to have tea party ties -- for extra scrutiny when seeking tax-exempt status.

Though the agency insisted Friday that no high-level employees knew about the practice, the draft of an inspector general's report due to be released this week reveals that Lois Lerner -- an IRS official in charge of oversight of tax-exempt groups -- knew about it as early as June 2011.

The timeline, which CBS News has obtained, also indicates that the IRS began singling out tea party groups in the spring of 2010, a full two years before the agency head told Congress the targeting never happened.

And appendices from the upcoming Treasury Inspector General for Tax Administration (TIGTA) watchdog report say the IRS determined it would actually have to destroy some of the inappropriately collected information -- auditors indicated in June 2012 a letter was drafted to inform organizations the information would be destroyed.

According to the timeline, a group of IRS specialists were instructed to focus on organizations seeking tax-exempt status that had "political sounding names" as early as the spring of 2010. By July, specialists were told to be on the lookout for tea party applications, and a slew of tea party-affiliated groups have complained the IRS demanded they file thousands of pages worth of documentation over the course of years, stalling their applications and hindering their functionality.

According to the draft report, applications that met a specific set of criteria were to be flagged and sent to a team of specialists. Among the criteria included references to "Tea Party," "Patriots," or the "9/12 project"; groups with a focus on issues like government spending, government debt, or taxes; those that meant to educate the public via advocacy or lobbying to "make America a better place to live"; or a statement in the case file criticizing how the country was being run.

On August 4, 2011, according to the timeline, the IRS's Rules and Agreements office personnel "held a meeting with Chief Counsel so that everyone would have the latest information on the issue."

In January 2012 - after Lerner reportedly learned of special processing for these groups - the criteria was updated to include "political action type organizations involved in limiting/expanding government, educating on the Constitution and Bill of Rights, social economic reform/movement."

Months later, in April 2012, Lerner penned a letter to House Oversight Chairman Darrell Issa, R-Calif., assuring him the rigorous scrutiny some conservative groups had complained about was "in the ordinary course of the application process" for nonprofit groups seeking tax exemption.

By that point, Congress had been making inquiries about the possibility of IRS discrimination against tea party organizations for some time. In October of 2011, Rep. Charles Boustany, R-La., wrote to then-IRS Commissioner Douglas Shulman requesting information regarding the tax-exempt sector. The IRS responded in November, but did not mention knowledge about the targeting of conservative groups. In March 2012, Boustany wrote to Shulman again, asking questions about reports that "the IRS has been questioning new tax-exempt applicants, including grassroots political entities such as Tea Party groups." Again, the IRS response excluded knowledge of conservative targeting. In May 2012, House Ways and Means Committee Chairman Dave Camp, R-Mich., requested all 501(c)(4) applications in 2010 and 2011. The IRS again responded without mentioning its knowledge that certain groups were being flagged for special consideration.

Meanwhile, in March 2012, Shulman told a congressional panel there was "absolutely no targeting" taking place.

According to the IRS, senior leadership members were not aware of the targeting when Shulman delivered this testimony, and that the timeline doesn't contradict his statement.

"IRS senior leadership was not aware of this level of specific details at the time of the March 2012 hearing," the IRS said in a Saturday statement to CBS News. "The timeline does not contradict the commissioner's testimony. While exempt organizations officials knew of the situation earlier, the timeline reflects that IRS senior leadership did not have this level of detail."

The IRS said Monday the current acting commissioner learned about the targeting in May 2012.

In the years since the tea party burst into the political scene in 2009-10, when the hands-off government network was largely credited for helping to usher into Congress a new crop of far-right lawmakers, its influence has waned considerably. But the recent revelations have sparked outrage among Republicans and Democrats alike, and both parties are calling for further inquiry into IRS practices.

"This is truly outrageous, and it contributes to the profound distrust that the American people have in government," Collins said Sunday on CNN's "State of the Union." "It is absolutely chilling that the IRS was singling out conservative groups for extra review, and I think it's very disappointing that the president hasn't personally condemned this and spoken out."

Meanwhile, Sen. Marco Rubio, R-Fla., has demanded the resignation of acting IRS Commissioner Steven Miller, as well as congressional testimony from Treasury Secretary Jack Lew, his predecessor and "other past and present high-ranking officials at the Department of Treasury and IRS."

"Recent revelations about the Internal Revenue Service's selective and deliberate targeting of conservative organizations are outrageous and seriously concerning," Rubio said in a Monday statement. "This years-long abuse of government power is an assault on the free speech rights of all Americans. This direct assault on our Constitution further justifies the American people's distrust in government and its ability to properly implement our laws."

Democrats, too, are beginning to demand congressional action.

Sen. Baucus, D-Mont., Chairman of the Senate Finance committee, called the IRS actions "an outrageous abuse of power and a breach of the Public's trust," and said "the IRS should be prepared for a full investigation into this matter by the Senate Finance Committee."

"The IRS will now be the ones put under additional scrutiny," he said Mnoday in a statement.

Legislation is already in the works that would criminalize the alleged behavior under fire.

House Ways and Means Committee Chairman Dave Camp, R-Mich., announced Friday that he would organize a hearing on the wrongdoing; Rep. Mike Turner, R-Ohio, meanwhile, has already penned a bill that would make it a crime for IRS employees to discriminate against an individual or a group, raising the penalty for that action to a fine of $5,000, up to five years in prison, or both. The bill also expressly clarifies that political speech and political expression are protected rights.

Nancy Cordes and Jill Jackson contributed to this report.