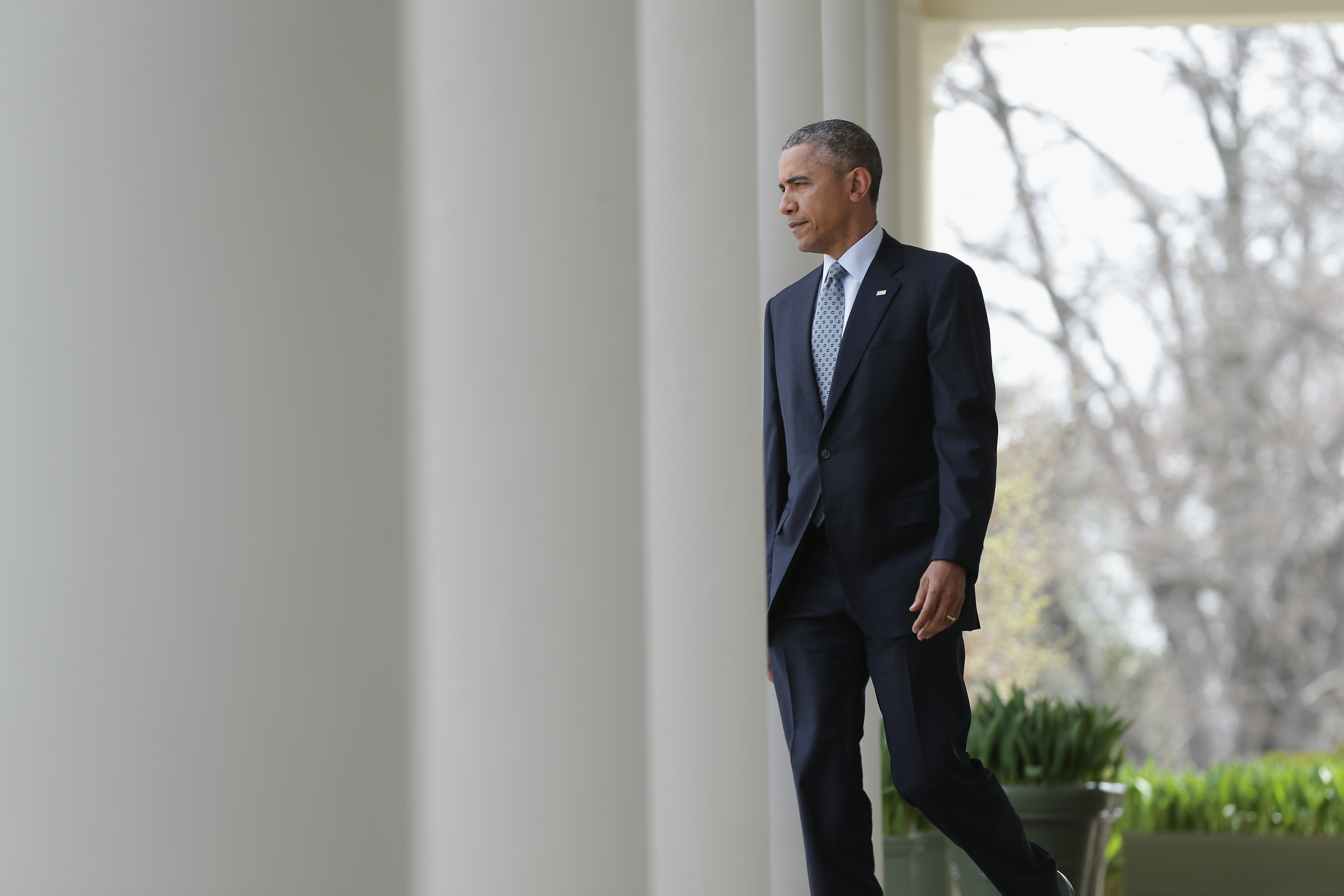 WASHINGTON -- President Obama is casting the Iran talks as part of a broader foreign policy doctrine that sees American power as a safeguard that gives him the ability to take calculated risks.

Mr. Obama staunchly defended a framework nuclear agreement with Iran as a "once-in-a-lifetime opportunity" to prevent Iran form getting a nuclear weapon and to bring longer-term stability to the Middle East. He insisted the U.S. would stand by Israel if it were to come under attack, but acknowledged that his pursuit of diplomacy with Tehran has caused strain with the close ally.

"It's been a hard period," Mr. Obama said in an interview with New York Times columnist Thomas Friedman. He added that it is "personally difficult" for him to hear his administration accused of not looking out for Israel's interests.

"We are powerful enough to be able to test these propositions without putting ourselves at risk," he said, citing his overtures to Cuba and Myanmar as other examples of his approach.

In an interview with NPR, the president also said it was a "fundamental misjudgment" to assume he could force Iran to recognize Israel as a condition of the nuclear negotiations.

"The notion that we would condition Iran not getting nuclear weapons in a verifiable deal on Iran recognizing Israel is really akin to saying that we won't sign a deal unless the nature of the Iranian regime completely transforms. And that is, I think, a fundamental misjudgment," the president said, according to an except of the interview that was released Monday. "We want Iran not to have nuclear weapons precisely because we can't bank on the nature of the regime changing. that's exactly why we don't want to have nuclear weapons. If suddenly Iran transformed itself to Germany or Sweden or France then there would be a different set of conversations about their nuclear infrastructure."

The president's comments come in his seventh year in office and days after the U.S. and other world powers reached a tentative agreement to curb Iran's nuclear program in exchange for sanctions relief. The framework cleared the way for negotiators to hammer out technical details ahead of a June 30 deadline for a final deal.

Mr. Obama argued that successful negotiations presented the most effective way to keep Iran from obtaining a nuclear weapon, but insisted he would keep all options on the table if Tehran were to violate the terms.

"I've been very clear that Iran will not get a nuclear weapon on my watch, and I think they should understand that we mean it," Mr. Obama said in the interview published Sunday. "But I say that hoping that we can conclude this diplomatic arrangement - and that it ushers a new era in U.S.-Iranian relations - and, just as importantly, over time, a new era in Iranian relations with its neighbors."

The president said there are many details that still need to be worked out with the Iranians and cautioned that there would be "real political difficulties" in implementing an agreement in both countries.

He reiterated his opposition to a legislation that would give Congress final say in approving or rejecting a deal, but said he hoped to find a path to enable Congress to "express itself."

The chairman of the Senate Foreign Relations Committee said Sunday Congress would exercise its "rightful role" to scrutinize and approve any agreement with Iran.

"It's very important that Congress is in the middle of this, understanding, teasing out, asking those important questions," Sen. Bob Corker, R-Tenn., said on "Fox News Sunday."

The Senate will take up legislation mandating that the White House seek approval from Congress when it returns on April 13, reports CBS News correspondent Nancy Cordes.

The White House has said Mr. Obama would veto that bill as it stands now, but Corker said Sunday he believes they may be close to having enough votes to override that veto, Cordes adds.

The White House plans an aggressive campaign to sell the deal to Congress, as well as to skeptical Arab allies who worry about Iran's destabilizing activity in the region. The president has invited leaders of six Gulf nations to Washington this spring and said he wanted to "formalize" U.S. assistance.

On the substance of the Iran framework agreement, Mr. Obama outlined more specifics of how the U.S. would seek to verify that Tehran wasn't cheating. He said there would be an "international mechanism" that would assess whether there needed to be an inspection at a suspicious site and could overrule Iranian objections.

The nuclear talks have marked a remarkable shift in the frozen relationship between the U.S. and Iran. It has become normal for officials from both countries to communicate and hold face-to-face meetings. Mr. Obama has yet to meet with Iranian President Hasan Rouhani, though they did speak on the phone. He has also exchanged letters with Iran's Supreme Leader Ayatollah Ali Khamenei.

Mr. Obama said the letters include "a lot of reminders of what he perceives as past grievances against Iran." But he said the concessions Khamenei allowed his negotiators to make in the nuclear talks suggests that "he does realize that the sanctions regime that we put together was weakening Iran over the long term, and that if in fact he wanted to see Iran re-enter the community of nations, then there were going to have to be changes."