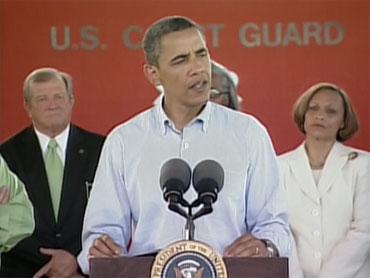 In a newly optimistic tone, President Barack Obama promised Monday that the Gulf Coast and the region's fouled waters will bounce back from the catastrophic BP oil spill.

"I promise you this," he said. "Things are going to return to normal."

He declared Gulf seafood safe to eat and said his administration was redoubling inspections and monitoring to make sure it stays that way. And his White House said Monday it had wrested apparent agreement from BP PLC to set up an independent, multibillion-dollar compensation fund for people and businesses suffering from the spill's effects.

Addressing reporters from Theodore, Alabama, the president said, "It's too early now for me to make an announcement" about the fund, that he has had a "constructive conversation" with BP officials.

Earlier, White House spokesman Bill Burton told reporters with the president that the administration and BP were "working out the particulars," such as the exact amount of the fund and how it would be run.

Burton said the account would be in the hands of a third-party and would amount to "billions of dollars."

"We're confident that this is a critical way in which we're going to be able to help individuals and businesses in the Gulf area become whole again," Burton said.

On his fourth visit to the region, Mr. Obama was determined to assert leadership in face of the calamity, with the White House showing the president using all the power available to him to stem the continuing flood of oil into the Gulf and extract compensation from BP for victims of the tragedy.

Mr. Obama's first stop on Monday was a briefing at a Coast Guard station here on Mississippi's coast, where he said that the two days in the region would help him prepare for Wednesday's showdown with BP. In particular, Mr. Obama said there continues to be problems with claims for damages and with effective coordination.

"We're gathering up facts, stories, right now so that we have an absolutely clear understanding about how we can best present to BP the need to make sure that individuals and businesses are dealt with in a fair manner and a prompt manner," the president said.

He then headed to lunch with some local residents.

Aside from the compensation fund, administration officials have also said that BP has submitted a revised containment strategy that should increase the amount of oil captured to more than 50,000 barrels a day by the end of June, two weeks earlier than originally planned, reports CBS Radio News White House correspondent Peter Maer.

The new plan was in response to a Coast Guard demand Saturday that the company speed up the containment processs. Currently, containment efforts in the Gulf are siphoning off approximately 15,000 barrels of oil a day. That capacity is expected to increase to up to 28,000 barrels by the end of the week as BP moves additional equipment into the area, Coast Guard Adm. Thad Allen told reporters Monday.

Increasingly accurate estimates of the spill have brought the enormity of the disaster into focus. Already potentially more than 100 million gallons of crude expelled into the Gulf, far outstripping the 1989 Exxon Valdez disaster.

BP's board gathered Monday in London to discuss deferring its second-quarter dividend and putting the money into escrow until the company's liabilities from the spill are known.

The administration had said earlier - uncertain that BP would voluntarily establish the damage fund - that Mr. Obama was prepared to force BP to take the step.

The president 's two-day visit to Mississippi, Alabama and Florida precedes his first-ever Oval Office address to the U.S. Tuesday night and his first face-to-face meetings with BP executives on Wednesday.

BP said in a statement its costs for responding to the spill had risen to $1.6 billion, including new $25 million grants to Florida, Alabama and Mississippi. It also includes the first $60 million for a project to build barrier islands off the Louisiana coast. The estimate does not include future costs for scores of damage lawsuits already filed.

Mr. Obama's first three trips to the Gulf took him to the hardest-hit state, Louisiana. On Monday, Day 56 since the BP-leased Deepwater Horizon drilling rig exploded and unleashed a fury of oil into the Gulf, he started his tour in Gulfport, Mississippi. From there he traveled along the coast to Alabama, where oil was washing up in heavy amounts along the state's eastern shores.

He met state and local officials eager for him to show command, provide manpower and supplies and also tell the public that despite the catastrophe that's crippling the fishing and tourist trades, many beaches are still open.

The day included a ferry ride to view barrier islands in Alabama where oil has come ashore. Obama had not taken to the water in his previous Gulf visits.

For instance, Burton said Obama will address both worker safety and food safety "to make sure the American people know we're doing everything we can and we're monitoring in each and every place possible."

The symbolism of using the Oval Office for an address for the first time in Obama's presidency was deliberate, and a decision made by the president himself, Burton said. "What we're seeing in the Gulf is a catastrophe the likes of which our country has never seen," he said.

The next day, Wednesday, Mr. Obama will convene his first meeting with BP PLC executives, expected to include the company's much-criticized CEO, Tony Hayward. And on Thursday, BP executives will likely face angry lawmakers as they testify on Capitol Hill.