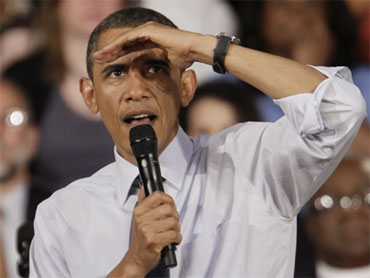 Seizing on a political opportunity, President Barack Obama on Wednesday lashed out at Republicans as out of touch with the daily problems of Americans, hoping to sharpen the contrast with the opposition party as midterm elections loom and economic anxiety still runs high.

Speaking to a town hall in his latest getaway from Washington, Obama reveled in what the Democratic Party sees as two recent political gaffes by Republicans — one House lawmaker's apology to BP oil and another's characterization of the nation's financial collapse as an "ant."

More broadly, Obama said of Republicans: "Their prescription for every challenge is pretty much the same — and I don't think I'm exaggerating here: basically cut taxes for the wealthy, cut rules for corporations and cut working folks loose to fend for themselves."

Yet it is Obama and Democrats, as the party in power, who stand to take the most heat from the public concern about swelling government spending. The president jumped on a chance in the town hall to defend the rescue efforts for the auto companies and the big banks and to embrace the frustration about them.

"How do we get government spending under control?" he asked, giving voice to public complaints. "That's a legitimate question. And whether you're a Democrat, an independent or a Republican, all of us should be worried about the fact that we have been running the credit card in the name of future generations. And somebody's going to have pay that back."

Obama said the main culprit was not the costly emergency measures under his watch but a structural habit of the government spending more than it takes in. He said the answer is to reduce spending in a "gradual way" that doesn't hurt people.

Obama spoke in Racine, south of Milwaukee, where the jobless rate stands at a troubling 14.2 percent, well above the national average.

The stop in Wisconsin, a state Obama won in 2008, was ostensibly intended to allow the president to hear from residents in a format he favors. But with his economic leadership in deep question and national unemployment persistently near 10 percent, Obama seized a chance to defend his vision with gusto.

With the country fatigued by bailouts and worried about federal debt, Obama tried to remind people that, in his view, it was a hands-off government attitude that helped cause the problems he inherited. He said he did not want big government, but rather a "responsible government" that is on the side of the people.

"We've tried the other's sides theories," Obama said. "We know what their ideas are. We know where they led us."

Ticking off his grievances, Obama called out some Republicans for opposing a pending extension of unemployment benefits; a measure to raise the liability that must be paid by companies that cause environmental disasters; and a massive Wall Street reform bill.

Responding to House Minority Leader John Boehner's gripe that the financial bill amounts to "killing an ant with a nuclear weapon," Obama challenged Boehner to explain that to the people of Racine.

Boehner released a response to Mr. Obama's comments in which he said "The President should be focused on solving the problems of the American people...instead of my choice of metaphors."

"I wasn't minimizing the crisis America faced - I was pointing out that Washington Democrats have produced a bill that will actually kill more jobs and make the situation worse," he said.

The president also seized on GOP Rep. Joe Barton's apology to BP - which Barton later apologized for - over the $20 billion victims' compensation fund Obama pressured BP to establish. The president scoffed at Barton, the top Republican on the energy committee.

Once the audience got involved, Obama fielded questions about help for struggling homeowners, support for the military, the costly economic stimulus law and more.

The president seemed to enjoy the moment. And earlier, on his way into town, Obama found a different slice of happiness — at a pastry shop.

He made a surprise detour to O&H Danish Bakery, purveyor of a delicacy called a kringle — a large round flat pastry with a hole in the middle. He ordered one pecan and one cherry. A saleswoman recommended the cheese as well, so he said, "Let's get a third!"