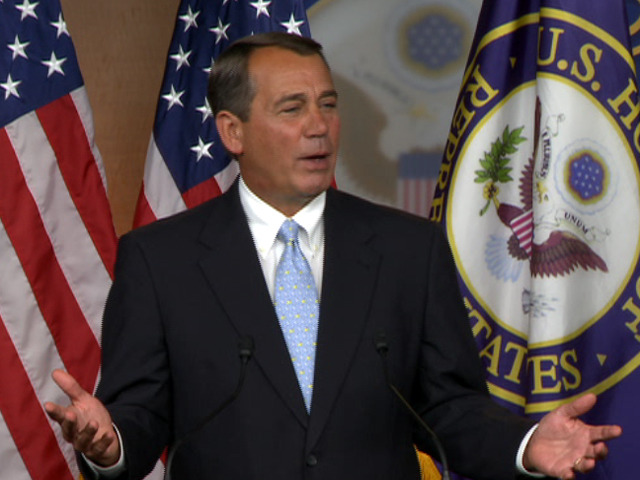 House Republican Leader John Boehner said in an interview with the Pittsburgh Tribune-Review out today that he would back raising the Social Security retirement age to 70 for those who will not retire for another 20 years.

The comment - along with Boehner's statement that the financial reform compromise reached last Friday creates a bill that amounts to "killing an ant with a nuclear weapon" -- has drawn the attention of Democrats eager to cast the GOP as uncaring about the problems of average Americans.

Democratic Congressional Campaign Committee National Press Secretary Ryan Rudominer told Hotsheet in response to the comment that the Republican "blueprint" is to privatize Social Security and Medicare, citing the budget of Representative Paul Ryan (R - Wis.). (Republicans are quick to note that while Ryan's "blueprint" for the future has advocated such measures, he has not put them forward as the House Republican budget.)

Liberal group Americans United for Change, meanwhile, said Boehner "hopes to unravel progress made as far back as 70 years by scaling back Social Security" and said the "ant" comment reflects "a blunt acknowledgment of the ant-sized appreciation Republican leaders have for the pain and suffering working Americans are still feeling in the wake of the meltdown on Wall Street."

Boehner spokesman Michael Steel told Hotsheet that Democrats are twisting the "ant" comment and noted that Boehner advocated raising the Social Security retirement age at President Obama's fiscal summit last year, as part of an effort to reduce the deficit.

It's also important to note that some in the liberal base have complained that Democrats themselves are working to scale back Social Security and Medicare via President Obama's bipartisan deficit commission, which is charged with bringing down the deficit to three percent of the economy by 2015.

Discussing the type of entitlement reforms the deficit commission could recommend, House Majority Leader Steny Hoyer said earlier this month: "On the spending side, we could and should consider a higher retirement age, or one pegged to lifespan, more progressive Social Security and Medicare benefits; and a stronger safety net for the Americans who need it most."