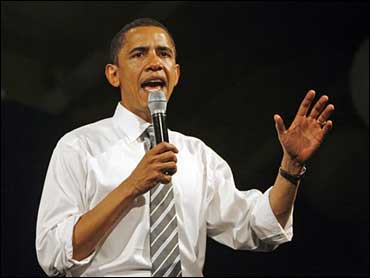 Barack Obama, caught up in the fervor of a campaign speech Tuesday, drastically overstated the Kansas tornadoes death toll, saying 10,000 had died.

"In case you missed it, this week, there was a tragedy in Kansas. Ten thousand people died — an entire town destroyed," the Democratic presidential candidate said in a speech to 500 people packed into a sweltering Richmond art studio for a fundraiser.

Obama mentioned the disaster in Greensburg, Kan., in saying he had been told by the office of Kansas Gov. Kathleen Sebelius that the state's National Guard had been depleted by its commitment to the Iraq War.

"Turns out that the National Guard in Kansas only had 40 percent of its equipment and they are having to slow down the recovery process in Kansas," Obama said, his shirt sleeves rolled up and his head glistening with sweat.

As the Illinois senator concluded his remarks a few minutes later, he appeared to realize his gaffe.

Obama spokesman Bill Burton said later that the senator meant to say "at least 10," instead of 10,000.

During his speech, Obama stirred the crowd as he often does by skewering President Bush over the unpopular war and noting that he opposed it from the outset.

"How could we have been involved in a war that never should have been authorized, that has already cost us half a trillion dollars," Obama said.