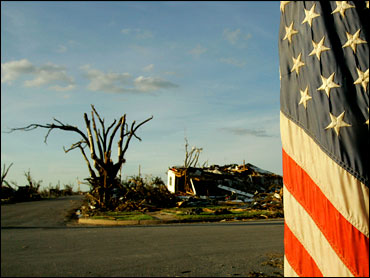 The death toll from one of the strongest tornadoes to hit the United States in the past eight years climbed to 11 on Tuesday when a critically injured Kansas police officer was removed from life support.

Robert Tim Buckman, a 46-year-old officer, suffered a head injury in the storm Friday that also killed nine people in Greensburg and another person nearby, officials said. He died early Tuesday at a Wichita hospital, a few hours after his daughter was married at his bedside, his son, Derick Buckman, told The Associated Press.

"He died being a hero," Derick Buckman said. "He was sworn to protect people, and that's what he was doing the night he got picked up by a tornado."

During his final hours, Robert Buckman symbolically gave away his 18-year-old daughter in a marriage ceremony at his bedside, his son said. The family's hometown preacher officiated at the ceremony for Kylee Buckman and her boyfriend, Josh Mondello, 22, Derick's best friend.

"He was there with his daughter to give her away," said Derick Buckman, a 25-year-old firefighter.

Buckman's son-in-law, Seth Cole, who is in the U.S. Army and had been scheduled to deploy to Iraq on Tuesday, said he requested leave to be with his wife, their three children and her family on Monday, but his request was denied by commanders at Fort Stewart, Ga. As he was preparing to leave later Tuesday, his battalion commander informed him he would be allowed a delay to attend the funeral.

Search and rescue operations continued Tuesday in Greensburg, where emergency responders have struggled to determined if any of its 1,600 residents are missing because many are staying with friends or relatives rather than in shelters.

President Bush was to tour the damage on Wednesday.

The 1.7-mile-wide, Category F-5 enhanced tornado, with wind estimated at 205 mph, destroyed about 95 percent of this farming town Friday.

One family is intact thanks to the heroics of a neighbor, reports CBS News correspondent Hari Sreenivasan. Kelsey Schroth protected her baby, Jaden, under a pile of rubble until her neighbor, Dennis McKinney, whose own house was leveled, pulled her free.

"He landed in this arm," said Schroth, touching her left elbow, "and I held the wall off of him with this arm," she said, holding up her right arm.

Five trailers to house displaced families have arrived, and 20 more are on the way, said FEMA Director R. David Paulison, who toured the town by bus on Monday.

The government's response to the disaster was undermined by ongoing National Guard deployments to the Middle East, Gov. Kathleen Sebelius said.

"I don't think there is any question if you are missing trucks, Humvees and helicopters that the response is going to be slower," Sebelius said. "The real victims here will be the residents of Greensburg, because the recovery will be at a slower pace."

White House spokesman Tony Snow rejected the criticism, saying the National Guard had equipment positioned around the country to respond to disasters when requested by states.

The storm system lingered over the central Plains in the week and was being blamed Tuesday for flooding across the states. The National Weather Service has issued flash flooding warnings for 10 Oklahoma counties, and several rivers were above flood stage. Thunderstorms are expected to continue until about Thursday.