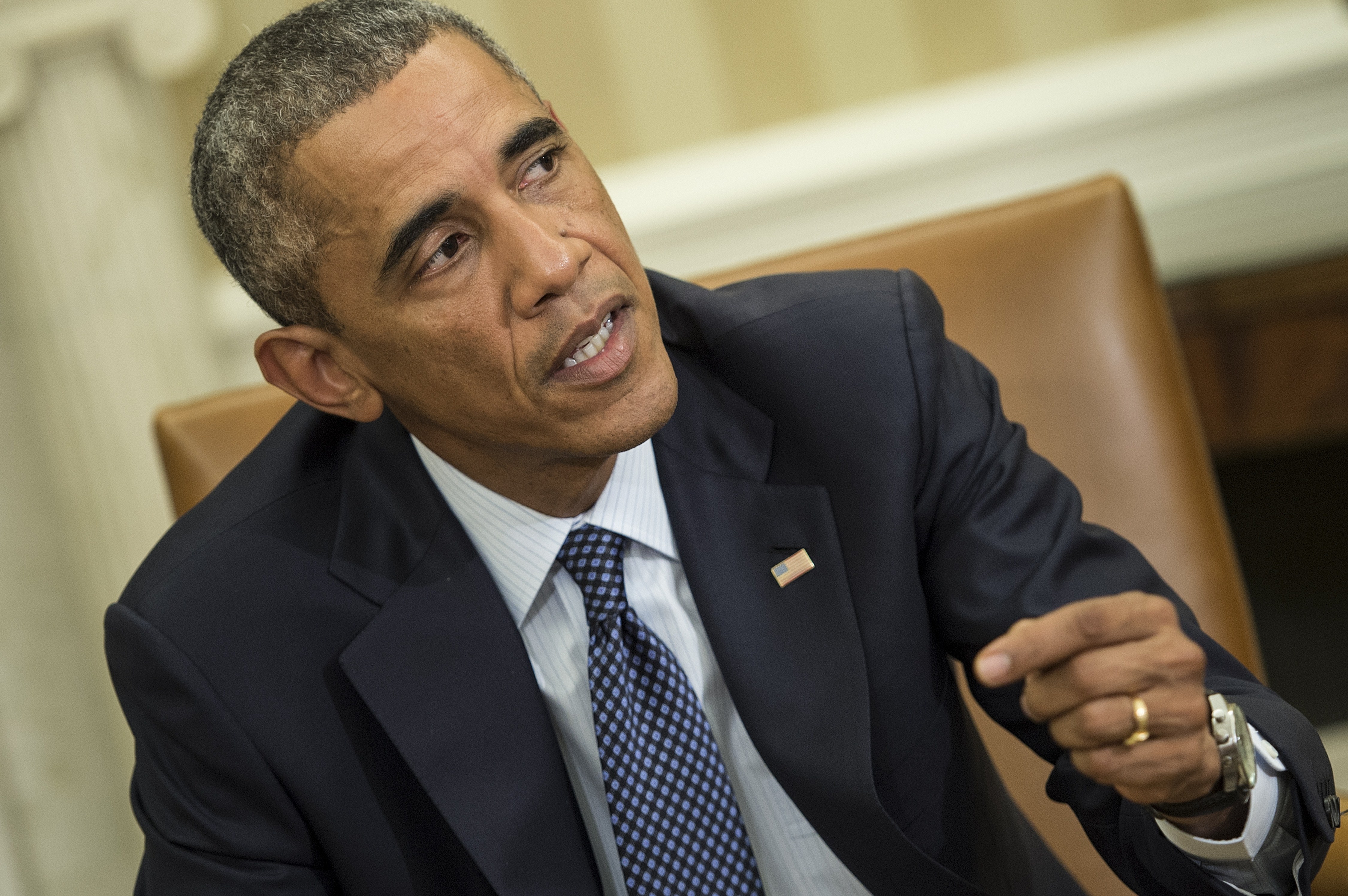 President Obama is struggling with the politics and policy of an Ebola travel ban.

After canceling his second day of travel to focus on the epidemic, Mr. Obama addressed increasing calls for a travel ban from the Oval Office, his team of health care and homeland security advisers huddled around, looking pensive and exhausted.

"I don't have a philosophical objection, necessarily, to a travel ban if that is the thing that is going to keep the American people safe," Mr. Obama said Thursday before listing all the reasons he has resisted one so far.

"If we institute a travel ban instead of the protocols that we've put in place now, history shows that there is a likelihood of increased avoidance," he said. "People do not readily disclose their information. They may engage in something called broken travel - essentially breaking up their trip so they can hide the fact that they have been to one of these countries where there is a disease in place. As a result we may end up getting less information about who has the disease, they are less likely to get treated properly, screened properly, quarantined properly and as a consequence we could end up having more cases rather than less."

Those comments amplified what White House Press Secretary Josh Earnest and Dr. Tom Frieden of the Centers for Disease Control and Prevention have been saying before Congress, inquisitive White House reporters and numerous cable network anchors. For the first time, Mr. Obama confronted the policy question head-on. But no sooner had the president listed all the scientific reasons not to impose a travel ban, he appeared to undercut the argument and opened the door to imposing one later.

"Now, I continue to push and ask our experts whether, in fact, we are doing what's adequate in order to protect the American people," he said. "If they come back to me and they say there's some additional things we need to do, I assure you we will do it. But it is important in these circumstances for us to look at the history of how these infectious diseases are best dealt with. And it is currently the judgment of all those who have been involved that a flat-out travel ban is not the best way to go."

As with every policy question that becomes part of a heated political season - more on that in a moment - parsing of presidential words can prove illuminating and potentially predictive. Mr. Obama said it was possible experts could come to a different conclusion. How was left intentionally vague. He also opened up some distance between his current position and the scientific advice being given - "the judgment of those who have been involved." Other advisers could become involved. Also, something less than a "flat-out travel ban" could be recommended and approved.

To underscore the point that the travel ban debate is far from over, Mr. Obama concluded with this:

"I am asking these questions and if in fact it turns out that I am getting different answers then I will share that with the American people. We will not hesitate to do what is necessary in order to maximize the chances that we avoid an outbreak here in the United States."

The president was, in fact, less emphatic than his press secretary only hours early at the Thursday White House briefing.

"If we're trying to protect the American public, we should not put in place a travel ban," Earnest said.

According to The Hill newspaper, dozens of lawmakers support banning travel to the United States from the so-called Ebola "hot zone" - Liberia, Sierra Leone and Guinea. By the newspaper's tally, 56 members of the House (50 Republicans and six Democrats) and 11 senators (10 Republicans and one Democrat) support the travel ban. GOP candidates have pressed the issue in Senate races in Iowa, North Carolina, South Dakota and Georgia. In North Carolina, embattled Senate Democrat Kay Hagan said a travel ban "may be one tool we can use" without fully endorsing it. There have also been calls for a ban on travel visas. The White House also opposes that move.

Jamaica, St. Lucia and Colombia issued travel bans on passengers from West Africa this week. A computer model created by Northeastern University physicist Alexi Vespignani attempts to calculate the risks of global travel in the age of Ebola and suggests a travel ban would be of marginal help since air travel is so common and symptoms of the virus can take two to 21 days to develop. The survey was and its various computer models and predictions were dissected in Forbes.

Lawmakers tussled over the issue Thursday during a House hearing on Ebola preparedness and prevention.

"The current airline passenger screening at five U.S. airports through temperature-taking and self-reporting is troubling," said Rep. Tim Murphy, R-Pennsylvania. "Both CDC (Centers for Disease Control and Prevention) and NIH (National Institutes of Health) tell us that the Ebola patients are only contagious when having a fever, but we know this may not be totally accurate. A determined infected traveler can evade the screening by masking the fever with ibuprofen, or avoiding the five airports. Further, it is nearly impossible to perform contact-tracing of all people on multiple international flights across the globe."

Murphy pressed Frieden during the hearing, recounting a recent conversation on a travel ban that raised issues not related to public health.

Murphy: "Dr. Frieden, when we spoke on the phone the other day, you remained opposed to travel restrictions, because in your words, you said cutting commercial ties would hurt these fledgling democracies. Now is this the opinion of CDC? Is this your opinion or did someone also advise you, someone within the administration, someone in any other agencies, where did this opinion come from that that's of high importance?

Frieden: "My sole concern is to protect Americans. We can do that by continuing to take the steps we are taking here as well as to --

Murphy: "Did someone advise you on that, someone outside of yourself? Somebody else advise you that that's the position, we need to protect fledgling democracies?

Frieden: "My recollection of that conversation is that that discussion was in the context of our ability to stop the epidemic at the source.

Rep. Fred Upton, R-Michigan, asked Frieden about federal powers to impose a travel ban to protect public safety and protect against the spread of contagious diseases.

Upton: "The administration, as I understand it, as I've looked at the legal language, does the president -- does have the legal authority to impose a travel ban because of health reasons, including Ebola; is that not correct?

Frieden: "I don't have the legal expertise to answer that question.

According to Executive Order 13295 the federal government can take steps to apprehend, detain and conditionally release any individual suspected of carrying or possibly introducing specified "communicable diseases."

The executive order was drafted amid the SARS epidemic but an Oct. 9 Congressional Research Service report outlined federal and state powers - including a travel ban and the use of a "Do Not Board" list.

"The Secretary is also authorized to bar the entry of persons from foreign countries where the "existence of any communicable disease" poses a "serious danger" of entering the United States such that "a suspension of the right to introduce such persons and property is required in the interest of public health."

The report described the Do Not Board list as follows:

"The public health Do Not Board (DNB) list was developed by DHS and the CDC, and made operational in June 2007. The DNB list enables domestic and international health officials to request that persons with communicable diseases who meet specific criteria and pose a serious threat to the public be restricted from boarding commercial aircraft departing from or arriving in the United States.The list provides a tool for management of emerging public health threats when local public health efforts are not sufficient to keep certain contagious individuals from boarding commercial flights."

A September 2008 CDC report revealed 42 requests were made to put travelers on the Do Not Board list. Each had suspected or confirmed pulmonary tuberculosis. The CDC placed 33 travelers on the list.

Rep. Henry Waxman, D-California, defended existing policy and argued a travel ban would make matters worse at the source of the epidemic and here. Waxman questioned Frieden and Anthony Fauci, head of the NIH's Institute of Allergy and Infectious Diseases.

"If people were to come in by -- for example, going overland to another country, and then entering without our knowing that they were from these three countries, we would actually lose that information. Currently, we have detailed locating information. We're taking detailed histories, and we're sharing information with state and local health departments, so that they can do the follow-up they decide to do.

Waxman: "Dr. Fauci, do you agree with Dr. Frieden on this point?

For many Americans, there is an unnerving sense the government has not always known what it's dealing with when it comes to understanding and containing Ebola risks. What is clear is the White House has no interest in a travel ban, despite calls from Congress and the campaign trail for just that.