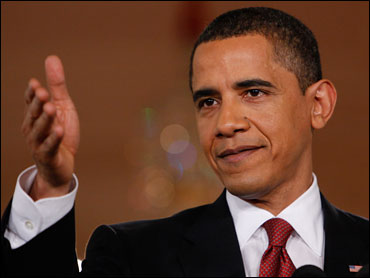 (AP Photo/Charles Dharapak)
President Obama faces the first major test of his international leadership skills as he prepares to take off on a challenging five-nation European trip.

The president lands in London Tuesday night, ahead of the crucial G20 economic summit. The president will be making his world stage premier at the London meeting and at a weekend NATO gathering in France and Germany.

His most pressing agenda items, the economy and the war in Afghanistan, will dominate the ambitious journey.

The London summit will perhaps be the most important gathering since the Cold War era when U.S. and Soviet leaders negotiated arms control agreements. This time, instead of the nuclear balance, the world's economic fate will be on the line.

In an interview with The Financial Times of London, Mr. Obama said summit leaders should "deliver a strong message of unity in the face of a crisis."

Many news previews of the London summit have suggested it will be a debate on the president's economic stimulus approach versus European calls for tougher regulation of the financial sector. In the Financial Times interview, the president complained, "The press has tended to frame this as an either-or approach."

"We need stimulus and we need regulation," he said.

While the administration would clearly like to see European countries emulate the president's stimulus strategy to promote a global economic recovery, Mr. Obama is not expected to seek any firm promises.

National Security Council economic adviser Michael Froman said, "Nobody is asking any country to come to London to commit to do more right now."

Froman predicted the summit would, "do whatever is necessary to restore global growth."

The president's message will be familiar to Americans who have followed his economic pronouncements. He will try to build confidence in his plan while acknowledging it will take time to succeed.

U.S. presidents have often been viewed as "first among equals" at world summits. Press Secretary Robert Gibbs said Mr. Obama, "is going to London to listen as well as to lead."

While conventions of world leaders have frequently been exercises in pre-cooked agendas and vague promises, the London meeting will be closely watched by world financial markets.

Analysts say any perception of lip service in the face of worldwide economic problems could shake markets.

Steven Schrage, an international business expert at the Center for Strategic and International Studies told reporters: "The risk is that we're behind the curve again, as we were approaching the economic crisis, in realizing that we may have to be prepared to shore up countries and institutions as they face these challenges."

(AP Photo/Ivan Sekretarev)
On the sidelines of the London meeting, the president will confer with the leaders of countries that are key to many U.S. strategic concerns. He'll meet with the leaders of Britain, France, Germany, Russia, China, South Korea, India and Saudi Arabia. The president's meeting with Russian President Dmitry Medvedev could lead to a date for a formal U.S.-Russian summit. (
Video: Meeting With Obama Key For Medvedev
)

The Russians will pay close attention to Mr. Obama's quick stop in Prague. Moscow is anxious about whether the administration will proceed with plans to build a new missile defense system in Eastern Europe. Poland and the Czech Republic have agreed to house the system that the U.S. describes as a defense against potential Iranian missile attacks.

The weekend NATO Summit will observe the alliance's 60th anniversary but it will be dominated by a discussion of the war in Afghanistan. There are already twice as many U.S. troops as NATO forces in the war zone.

Mr. Obama will outline his recent decision to send thousands of additional U.S. troops to the hot spot. The U.S. had once hoped that the allies would also send reinforcements, but Europeans have signaled they have no interest in a greater role.

Mr. Obama will wrap up the trip with a stop in a Muslim nation, Turkey. Officials say he will not use the visit to deliver the speech to the Islamic world that he promised to showcase in his first hundred days in office. That leaves the door open to another trip to a Muslim country. But Mr. Obama's words in Turkey will be closely watched in Islamic nations.

(CBS)
Peter Maer is a CBS News White House correspondent. He has been covering world summits since 1984. You can read more of his posts in Hotsheet here.