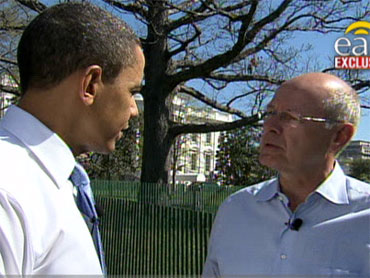 President Obama has noticed the "vitriol" in the nation's political atmosphere these days and says it's time both sides cooled it.

In a brief interview with "The Early Show" co-anchor Harry Smith Thursday before they shot some hoops on the White House basketball court, Mr. Obama called the extreme nature of some of the barbs directed his way on conservative talk shows "troublesome." He also said he's "concerned about a political climate in which the other side is demonized" - an observation meant for both Republicans and Democrats.

The remarks came in response to Smith telling him he's been listening to talk radio and "the kindest of terms you're sometimes referred to out in America is 'a Socialist.' The worst of which I've heard is -- called 'a Nazi."'

Asked by Smith whether he's "aware of the level of enmity that crosses the airwaves and that people have made part of their daily conversation" about him, Mr. Obama replied, "Well -- I mean, I think that -- when you've listened to Rush Limbaugh or Glen Beck it's …"

"It's beyond that," Smith interjected.

"It's pretty - apparent," the president continued, "and -- it's troublesome. But -- you know, keep in mind that there have been periods in American history where this kind of -- this kind of vitriol comes out. It happens often when -- you've got an economy that is making people more anxious and people are feeling that there's a lot of change that needs to take place. But that's not the vast majority of Americans."

"I do think that everybody has a responsibility, Democrats or Republicans, to tone down some of this rhetoric. And the truth is some of these comments when you actually ask, well, this is based on what? This notion that 'Obama's a Socialist,' for example. Nobody can really (he chuckled) give you a good answer -- much less when they, you know, make…"

"They would say mandating that people have to buy (health) insurance or something like that," Smith pointed out.

"Yeah," Mr. Obama said, "the -- the sort of plan proposed by current -- Republican nominee Mitt Romney, yeah. So it - it -- it doesn't make too much sense.

More from the Interview:
Obama: "I Can Go to My Right, but I Prefer My Left"
Obama: "Ratchet Up" Pressure on Iran
Obama, Harry Smith Shoot Some Hoops
Obama Compares Health Care Fight to Basketball

"It used to be that somebody who said -- something crazy -- they might be saying it to their next door neighbor, or it might be on some -- you know, late night AM station at the very end of the radio dial."

Does the talk abother him, even a little bit?

"You know," the president responded, " I - the -- you end up getting a pretty thick skin in this job. And obviously, when you've gone through a presidential campaign, there are a lot of things that -- that are said - that -- that-- that thicken your skin. I am concerned about a political climate in which the other side is demonized.

"I do think that there is a tone and tenor -- that needs to change, where we can disagree without being disagreeable or making wild accusations about the other side. And I think that's what most Americans would like to see, as well."

The interview aired on "The Early Show" Friday.