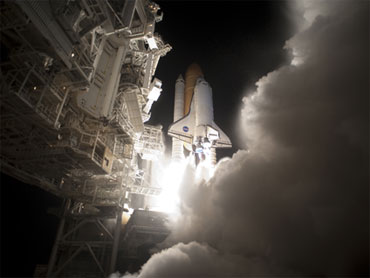 This story was filed by CBS News space analyst William Harwood, based at the Kennedy Space Center in Florida.

As part of a sweeping post-shuttle change of direction for NASA, the Obama administration's shift to private-sector rockets and spacecraft will include government development of a new heavy-lift rocket for eventual manned flights to a variety of deep space targets including, ultimately, Mars, an administration official said Tuesday.

While committed to terminating the Bush administration's Constellation moon program, the president supports development of a scaled-down version of Constellation's Orion crew capsule for use as a space station emergency escape vehicle and possible technology test bed.

Speaking on background, a senior administration official said Tuesday the Orion capsule could be launched unmanned to the International Space Station using commercial rockets as part of a broad effort to reduce reliance on Russian Soyuz spacecraft.

The official said the use of a scaled-down version of Orion, along with the development of new private-sector rockets and capsules to replace the shuttle, would end NASA's reliance on Russia for space transportation services sooner than would have been possible with the Constellation program's Ares rockets.

The president will discuss his new strategy for NASA during a conference at the Kennedy Space Center on Thursday, outlining a series of robotic and eventual manned deep-space missions that will build in an evolutionary, step-by-step approach to eventual flights to Mars, the official said.

While no timetable for such flights will be specified, a decision on what sort of heavy lift rocket architecture to pursue will be made in 2015, based in part on advanced technologies research that will be funded at more than $3 billion over the next five years.

As previously announced, the administration's plan for NASA includes an additional $6 billion over the next five years to fund a variety of technology and infrastructure development efforts that by 2012 will result, the administration official said, in 2,500 more jobs at the Kennedy Space Center than would have been expected under Constellation.

Looming job losses across NASA's contractor workforce have cast a pall over the space program in recent months. With the shuttle program's retirement late this year or early next - only three more missions are planned beyond Discovery's current flight - some 7,000 jobs will be lost at the Kennedy Space Center alone, with thousands more at other NASA field centers.

The Obama administration's change of course for NASA will not restore the lost shuttle jobs, but the additional spending will more than make up for the expected Constellation losses, the official said. Along with a shift to commercial launch services, the administration plans a $2 billion upgrade to the Kennedy Space Center's launch infrastructure.

And in the near term, the administration will spend $40 million to fund an "economic development action plan" to help the local workforce make the transition.

Taken together, the new initiatives mark a "more ambitious space strategy" than Constellation offered, the official said, adding that critics who have charged the president's approach represents an end to government-sponsored manned spaceflight "are just flat wrong."

Development of a new heavy lift super rocket will "unlock the solar system," the official said, and do it sooner than would have otherwise been possible.

Whether these new elements - commitment to a heavy lift rocket and use of Orion technology - will satisfy the administration's critics in Congress and elsewhere remains to be seen.

"We are stunned that, in a time of economic crisis, this move will force as many as 30,000 irreplaceable engineers and managers out of the space industry," they wrote. "We see our human exploration program, one of the most inspirational tools to promote science, technology, engineering and math to our young people, being reduced to mediocrity."

In the wake of the 2003 Columbia disaster, President Bush decided to complete the space station and retire the shuttle by 2010. At the same time, he directed NASA to begin development of new rockets, capsules and landers to carry astronauts back to the moon by the early 2020s. NASA came up with the Constellation program to implement those directives, spending some $9 billion over the past five years.

But funding shortfalls resulted in a projected five-year gap between the end of shuttle operations and the debut of the Ares I rocket and Orion crew capsule. To bridge the gap, NASA is paying the Russians some $50 million a seat to launch U.S. and partner astronauts to the space station aboard Soyuz rockets.

During the presidential campaign, Obama expressed support for Constellation but after the election, he set up a panel of outside experts to review NASA's plans and how much they might ultimately cost.

The panel concluded NASA could not afford to implement Constellation, or any other reasonable exploration program, without an additional $3 billion or so per year, primarily to make up for earlier budget reductions. And that did not take into account the cost of operating the International Space Station beyond 2015.

The group favored a shift to commercial launch services to carry astronauts to and from low-Earth orbit while NASA focused on development of a new heavy-lift rocket system that would enable eventual flights to the moon, nearby asteroids or even the moons of Mars.

The Obama administration agreed with the idea of commercial launch services, but it did not explicitly embrace the "flexible path" approach to deep space exploration suggested by the panel, focusing instead on development of enabling technologies and somewhat vague long-range goals.

The new commitment to development of a heavy lifter may defuse at least some of the outside criticism. But the benefits of using a scaled-down version of Orion for space station crew escape are not as clear. Seats purchased on Russian Soyuz rockets include launch and landing and the capsules remain docked at the station throughout a crew's stay, available as emergency lifeboats if needed.

Former NASA Administrator Mike Griffin, chief architect of the Constellation program and a signer of the open letter to the president, said in an email "the people who are offering this plan are flailing."

"The proposed 'Orion Lite' vehicles will not carry crew to the ISS," Griffin said. "Indeed, the first time they carry crew will be in an emergency. So we will need to replace them periodically to ensure that a fresh vehicle is available. ... Through all this we will have to continue to pay the Russians for crew transfer services until and unless commercial capability emerges.

"In the end, this seems like an expensive proposition that makes simply continuing to use the Russians for crew rescue look like a bargain."

(CBS)
William Harwood has been covering the U.S. space program full-time since 1984, first as Cape Canaveral bureau chief for United Press International and now as a consultant for CBS News. He has covered more than 115 shuttle missions, every interplanetary flight since Voyager 2's flyby of Neptune, and scores of commercial and military launches. Harwood is a devoted amateur astronomer and co-author of "Comm Check: The Final Flight of Shuttle Columbia." You can follow his frequent status updates at the CBSNews.com Space Place, where this story was first published.