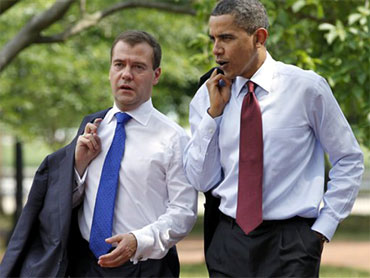 President Obama has declined to comment on allegations of Russian spying in the United States.

The FBI on Monday announced the arrests of 10 alleged deep-cover Russian agents after tracking the suspects for years. They are accused of attempting to infiltrate U.S. policymaking circles while posing as ordinary citizens. An 11th person allegedly involved in the Russian spy ring was arrested Tuesday in Cyprus.

Mr. Obama was asked about the alleged spies on Tuesday as he spoke to reporters about the economy. He said "thank you" and declined to answer.

The White House has referred questions about the matter to the Justice Department.

Russia's Foreign Ministry says some of the suspected spies arrested in the United States include Russian citizens but insist they did nothing to hurt U.S. interests.

A ministry statement issued Tuesday said Russia is counting on the U.S. to show "proper understanding" taking into account the "positive character" of U.S.-Russian relations.

The arrests came four days after Mr. Obama declared Thursday that he and Russian President Dmitry Medvedev have "succeeded in resetting" the relationship between the former Cold War adversaries that had dipped to a dangerous low in recent years.

The warming of the relationship between the two leaders was even depicted in their trip to a Washington-area burger joint.

During Medvedev's visit, Mr. Obama announced that the U.S. and Russia had agreed to expand cooperation on intelligence and the counterterror fight and worked on strengthening economic ties between the nations.

Each of the 10 was charged with conspiracy to act as an agent of a foreign government without notifying the U.S. attorney general, which carries a maximum penalty of five years in prison upon conviction. Two criminal complaints outlining the charges were filed in U.S. District Court in New York.

Most of the suspects were accused of using fake names and claims of U.S. citizenship while really being Russian. It was unclear how and where they were recruited, but court papers say the operation goes back as far as the 1990s.

Russia angrily denounced the U.S. arrests as an unjustified throwback to the Cold War, and senior lawmakers said some in the U.S. government may be trying to undercut Mr. Obama's warming relations with Moscow.

"These actions are unfounded and pursue unseemly goals," the Russian Foreign Ministry said in a statement. "We don't understand the reasons which prompted the U.S. Department of Justice to make a public statement in the spirit of Cold War-era spy stories."

Intelligence on Mr. Obama's foreign policy, particularly toward Russia, appears to have been a top priority for the Russian agents, prosecutors said.