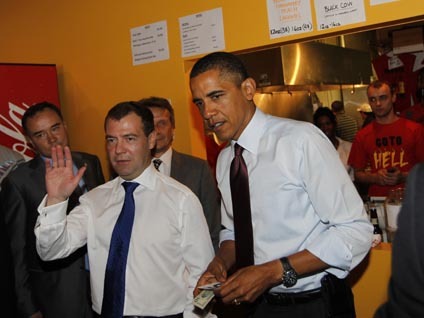 In keeping with today's theme of strengthening Russian-American ties, President Barack Obama and Russian President Dmitry Medvedev made an unannounced stop at a local burger shack to grab a bite to eat together.

Travelling by presidential motorcade, the two took a trip to Ray's Hell Burgers in Arlington, Virginia, a popular local burger joint that Mr. Obama took Vice President Joe Biden to last year. Upon their arrival, Mr. Obama and the Russian president were greeted with cheers and applause.

The two enjoyed their meals surrounded by security (and several excited diners), and their interpreters sat at the adjacent table to help with the lunchtime conversation.

As for what was on the menu for the presidential meal, Mr. Obama ordered a burger with cheddar cheese, onions, lettuce, tomatoes and pickles, while Medvedev made a slightly bolder selection of a burger topped with cheddar, onions, jalapenos and mushrooms, according to the White House.

And in an appropriately diplomatic fashion, the two presidents shared an order of French fries, and Mr. Obama picked up the tab.

Medvedev later thanked the president for the gesture in their joint press conference and joked, "It's not quite healthy but it's very tasty and you can feel the spirit of America."