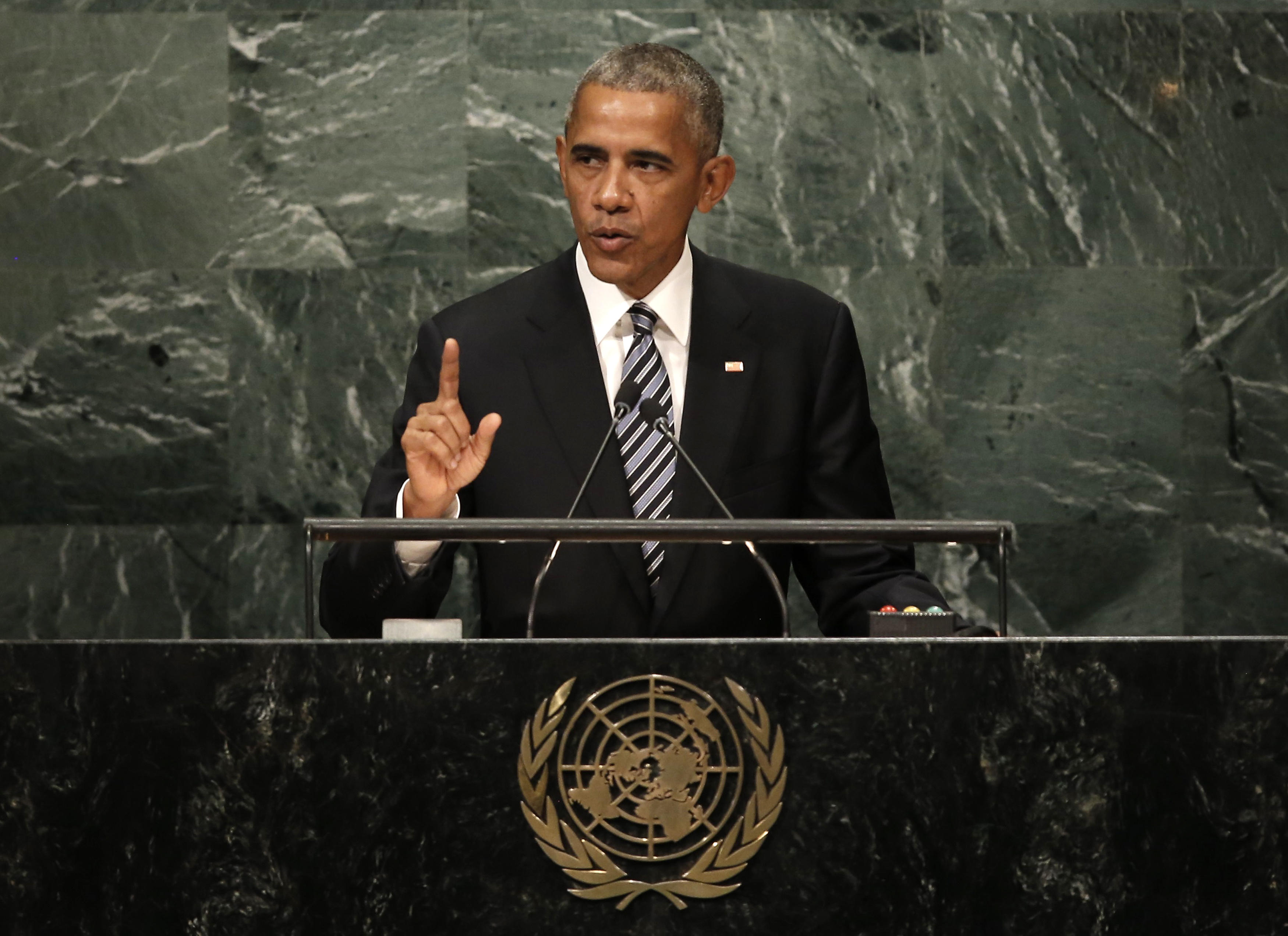 President Obama conceded Tuesday that the United States and other world powers have limited ability to solve the most profound challenges facing the world, while calling for a “course correction” for globalization to ensure that nations don’t retreat into a more sharply divided world.

“We are seeing the same forces of global integration that have made us interdependent also expose deep fault lines in the existing international order,” Mr. Obama said, in his final speech to the U.N. General Assembly. “In order to move forward...,” the president said, “we do have to acknowledge that the existing path to global integration requires a course correction.”

This U.N. session is the swan song for both Mr. Obama and Secretary General Ban Ki-moon. President Obama, as he laid out a world view of liberal democracy, praised some nations, and scolded others, reports CBS News’ Pamela Falk from the General Assembly Hall.

Referring to the “maniacal Medieval menace” of the Islamic State of Iraq and Syria, Mr. Obama acknowledged that the extremist and sectarian violence wreaking havoc in the Middle East and elsewhere “will not be quickly reversed.” Still, he stuck faithfully to his insistence that diplomatic efforts and not military solutions are the key to resolving Syria’s civil war and other conflicts.

“If we are honest, we know that no external power is going to be able to force different religious communities or ethnic communities to co-exist for long,” Mr. Obama said. “Until basic questions are answered about how communities co-exist, the embers of extremism will continue to burn. Countless human beings will suffer.”

In a less-than-subtle jab at Donald Trump, the Republican running to replace him, the president said, “The world is too small for us to simply be able to build a wall and prevent (extremism) from affecting our own societies.”

The president was unabashed in his critique of Russia as he laid out his diagnosis of the world’s ills. Mr. Obama’s longstanding differences with Russian President Vladimir Putin over his actions in Ukraine have accompanied intense disagreement over Syria’s future and a series of failed attempts by Russia and the U.S. to resolve the civil war there together.

“In a world that left the age of empire behind, we see Russia attempting to recover lost glory through force,” Mr. Obama said.

The tough talk about Russia illustrated how little progress has been made in reconciling the diverging interests among the two powers that has allowed the Syria crisis to continue to fester. A year ago, Mr. Obama stood at the same podium and declared anew that Syrian President Bashar Assad must leave power, while Putin gave a dueling speech warning it would be a mistake to abandon Assad.

In the year since, Moscow’s leverage in the conflict has strengthened significantly. Russia’s military intervention in Syria has helped bolster Assad’s standing without pulling it into the military “quagmire” that Mr. Obama had predicted.

The president sought to use his last appearance before the global body to define how his leadership -- as well that of past presidents -- had put the world on a better trajectory..

“I believe America has been a rare superpower in human history insofar as it has been willing to think beyond narrow self-interest; that while we’ve made our share of mistakes over these last 25 years -- and I’ve acknowledged some -- we have strived, sometimes at great sacrifice, to align better our actions with our ideals,” he said. “And as a consequence, I believe we have been a force for good.”

At the heart of that approach, the president said, is the notion that the biggest conflicts are best solved when nations cooperate rather than tackle them individually, adding that he knows “we can’t do this alone.”  It’s a theme that Democrat Hillary Clinton has put at the forefront of her campaign for president, casting herself as the natural continuation of Mr. Obama’s legacy. In an apparent reference to Trump, Mr. Obama bemoaned how terrorist networks had spread their ideology on social media, spurring anger toward “innocent immigrants and Muslims.”

Working together, he told the leaders, means accepting some constraints.

“Sometimes I’m criticized in my own country for professing a belief in international norms and multilateral institutions,” Mr. Obama said. “But I am convinced that in the long run, giving up some freedom of action -- not giving up our ability to protect ourselves or pursue our core interests, but binding ourselves to international rules over the long term -- enhances our security.”

He pointed to Iran as a positive example of this for having accepted constraints on its nuclear ambitions in order to enhance its “ability to work with other nations.”

Mr. Obama said that the world has become safer and more prosperous -- the integration of the global economy has made life better for billions, he pointed out. But at the same time, nations are struggling with a devastating refugee crisis, terrorism and a breakdown in basic order in the Middle East. He said governing had become more difficult as people lose faith in public institutions and tensions among nations spiral out of control more rapidly.

“This is the paradox that defines the world today,” the president said. “We must go forward, and not backward.” That will involve continuing the push to make the global economy work better -- not just for those at the top.

“While open markets, capitalism have raised standards of living around the globe,” Mr. Obama lamented, “globalization, combined with rapid progress and technology has also weakened the position of workers and their ability to secure a decent wage.”

The president cited his administration’s outreach to former adversaries Cuba and Myanmar as key examples of progress, along with global cooperation to cut emissions blamed for global warming. At the same time, he said he sought not to “whitewash” challenges across the globe, some of which he attributed to deepening anxieties about the profound shifts inflicted by technology and growing international interdependence.

The president also recalled the words of Martin Luther King, who wrote, “Human progress never rolls on the wheels of inevitability; it comes through the tireless efforts of men willing to be co-workers with God,” and he exhorted the U.N. to join him in being co-workers with god. “Our identities do not have to be defined by putting someone else down, but can be enhanced by lifting somebody else up,” he said. “They don’t have to be defined in opposition to others, but rather by a belief in liberty and equality and justice and fairness.”