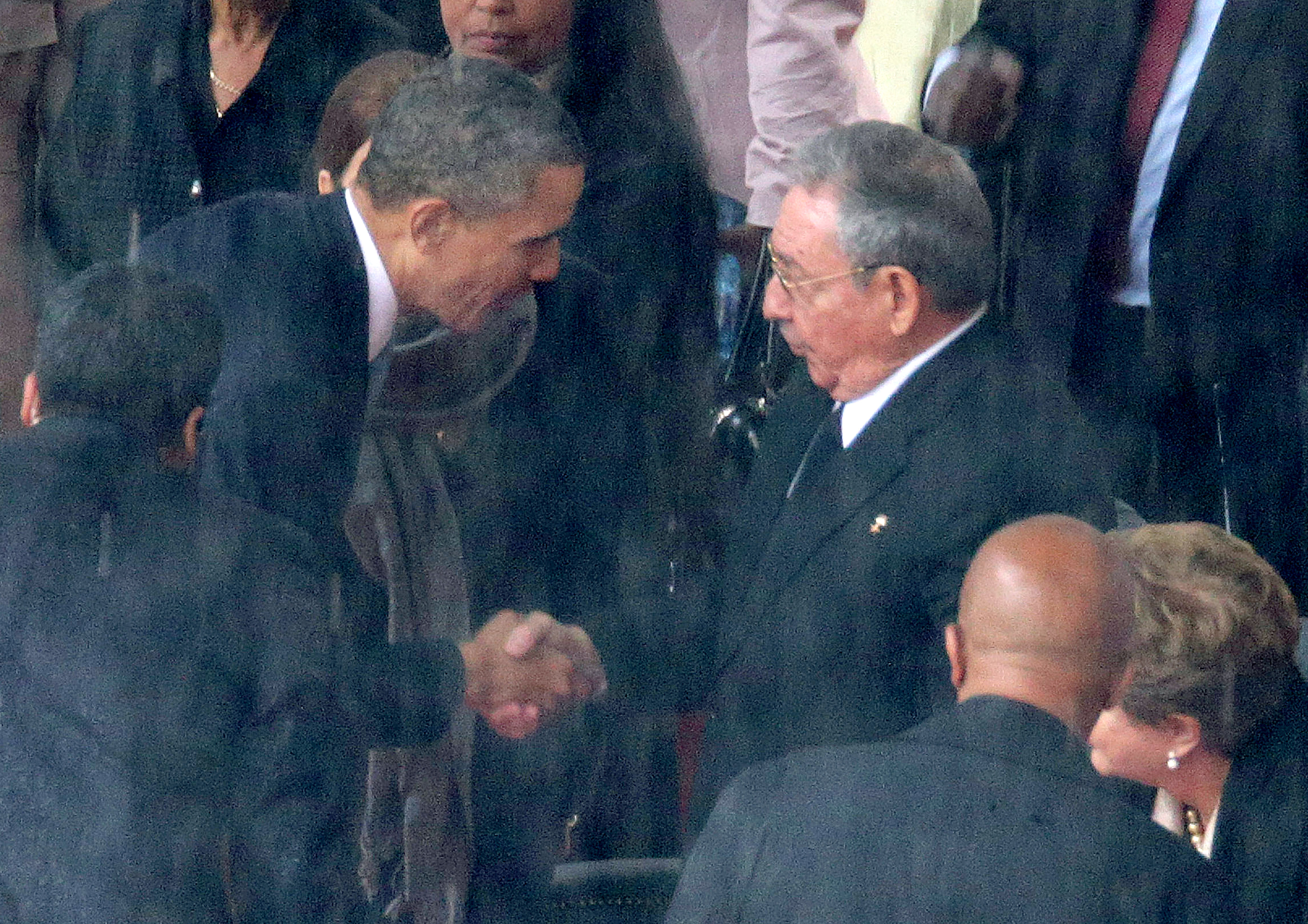 One day, it may be remembered as the handshake seen around the world: President Obama and Cuban President Raul Castro grasping each other’s hands during a memorial service for former South African President Nelson Mandela in Johannesburg Tuesday.

The two countries have not had diplomatic relations since Castro’s brother, Fidel, led a communist takeover of the country more than 50 years ago. Raul Castro became president in 2008 after Fidel Castro retired due to poor health.

While the news immediately ricocheted around American news outlets, CBS News’ Havana producer Portia Siegelbaum reported that Cuban TV did not carry live coverage of the funeral, so residents of the island were not immediately aware of the news.

Mr. Obama is not the first president to exchange in such pleasantries with a Cuban leader. Former President Bill Clinton shook hands with Fidel Castro during a meeting of world leaders at the United Nations in 2000. It was such a politically sensitive subject that the White House changed its story several times on the matter.

"Above all else, today is about honoring Nelson Mandela, and that was the President's singular focus at the memorial service. We appreciate that people from all over the world are participating in this ceremony. As the President said, we urge leaders to honor Mandela's struggle for freedom by upholding the basic human rights of their people," the official said.

Cuban-American lawmakers publicly condemned the interaction throughout the day.

"Sometimes a handshake is just a handshake. But when the leader of the free world shakes the bloody hand of a ruthless dictator like Raul Castro, it becomes a propaganda coup for the tyrant," Rep. Ileana Ros-Lehtinen, R-Fla., told Secretary of State John Kerry Tuesday during a hearing on Iran. She was born in Cuba and fled as a child with her family. "Right now as we speak, Cuban opposition leaders are being detained and they're being beaten while trying to commemorate today, which is International Human Rights Day. They will feel disheartened when they see these photos."Kerry responded that the president was at an international funeral where he didn't choose who was in attendance. "They're there to honor Mandela. And we appreciate that people from all over the world and from all different beliefs and walks of life who appreciated Nelson Mandela and/or were friends of his came to honor him," he said.

Rep. Marco Rubio, R-Fla., the son of Cuban immigrants, said, "If the president was going to shake his hand, he should have asked him about those basic freedoms Mandela was associated with that are denied in Cuba."

Fidel Castro supported the African National Congress and Mandela’s push to end apartheid for years, and the two leaders had a close relationship. During his speech at the memorial service Tuesday, Raul Castro praised Mandela as “an example of integrity and perseverance” who set an example for Latin America and Cuba.

Mr. Obama has overseen a slight thaw in U.S.-Cuba relations during his presidency, but it remains fraught over issues like former U.S. government contractor Alan Gross, who has been imprisoned in Cuba since 2009. He personally appealed to Mr. Obama for help securing his release on the fourthanniversary of his detention last week.