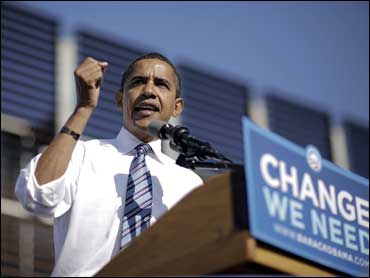 Despite John McCain's prediction of an upset, Barack Obama reached for a landslide Friday, invading his rival's home state with TV ads and building a lead in early voting in key battlegrounds as the presidential race headed into a hectic final weekend.

McCain charged that Obama, bidding to become the first black president, "began his campaign in the liberal left lane of politics and has never left it. He's more liberal than a senator who calls himself a socialist," he added in Hanoverton, Ohio, a reference to Sen. Bernie Sanders, an independent from Vermont.

Yet with the economy almost certainly in a recession and the country clamoring for change after eight years of Republican rule, even some of McCain's allies conceded the obvious. California Gov. Arnold Schwarzenegger said it would take a "major struggle for him to win" - although he quickly added the Arizona senator had come back before when he had been counted out.

An Associated Press-Yahoo News poll of likely voters put the Democrat ahead, 51 to 43, with a margin of error of plus or minus 3 percentage points.

The same survey gave McCain reason to hope - one in seven voters, 14 percent of the total - said they were undecided or might yet change their minds.

While the race for the White House drew most of the attention, minority Republicans in Congress braced for the loss of more seats in both the House and Senate.

Some said fresh polling in North Carolina suggested that incumbent GOP Elizabeth Dole had fallen further behind since airing an ad that tried to tie Democratic rival Kay Hagan to atheists.

Four days before the election, Obama was expanding his reach, and drawing large crowds as he moved methodically from one state to another that voted Republican in 2004. (Read more in Horserace)

After a stop home in Chicago to share Halloween with his two daughters, Obama took a bus ride about 30 miles across the state border, capping his day with a rally in Highland, Ind. "We are four days away from changing the United States of America," he proclaimed to a cheering crowd on a comfortable October evening.

Indiana is one of about a half-dozen states that went for President twice but remain up for grabs late this election season. Bush won the state by a 60-39 percent margin in 2004, and the competitive nature of the state this time around shows the strength of Obama's standing.

Obama used the occasion of Halloween to rib McCain in a new way, saying the Republican wore his usual costume: "Just like every year, he's going as George W. Bush."

Earlier in Iowa, Obama said, "What you started here in Iowa has swept the nation." His victory in the state's Democratic caucuses on Jan. 3 set him on the path to the party's nomination, and now to a lead in the presidential polls in the campaign's final hours.

Obama told supporters Friday to expect McCain's campaign to end in a crescendo of attacks on him. "More of the slash and burn, say-anything, do-anything politics that's calculated to divide and distract; to tear us apart instead of bringing us together," Obama told 25,000 in Des Moines, Iowa.

One senior adviser said the Illinois senator had been given the names of potential Cabinet and White House staff picks for review but had not had much time to consider them. The official spoke on condition of anonymity.

Obama could name a chief of staff as early as next week if he wins the election, in an effort to project a sense of urgency. Aides have contacted Rep. Rahm Emanuel of Illinois to consider a possible appointment to the post, but no job has been offered.

Aides announced he would air television commercials in McCain's home state of Arizona as well as in North Dakota and Georgia. He had run ads in the latter two states earlier in the campaign before suspending that effort.

The ad in McCain's state was a soft sell in a campaign that has had its share of attacks. This spot featured endorsements from former Secretary of State Colin Powell and Warren Buffett, the nation's best-known investor.

Even so, McCain's campaign manager, Rick Davis, dismissed it as a waste. "We encourage them to pick other states that we intend to win" to spend their money, he said.

Davis contended, "We are witnessing perhaps, I believe, one of the greatest comebacks since John McCain won the primary."

Privately, some Republicans expressed concerned about early voting trends, although the party had yet to unleash its final 72-hour program, designed to reach millions of voters deemed sympathetic to McCain and the Republicans.

Ways To Win
Calculate your own path to the presidency with our Electoral Vote prediction map.

Statistics showed Democrats ahead among pre-Election Day voters in Iowa, North Carolina, Florida, Colorado, New Mexico and Nevada. Bush won all six in 2004, and McCain needs to win most of them to claim the White House this year.

McCain was on the second day of a bus tour through battleground Ohio, a state that supported Bush and has voted with the winner in each presidential election for two decades.

Later Friday, Schwarzenegger joined him at a rally in Columbus.

"John McCain has served his country longer in a POW camp than his opponent has in the United States Senate," Schwarzenegger said. "I only play an action hero in the movies. John McCain is a real action hero."

McCain hit the same theme in a new television ad that had the feel of a campaign-closing appeal.

In it, he pledged to fix the economy, cut government waste and safeguard the nation's security.

"I've served my country since I was 17 years old. And spent five years longing for her shores. I came home dedicated to a cause greater than my own," said the former Navy pilot who was shot down, held and tortured for more than five years as a Vietnam prisoner of war.