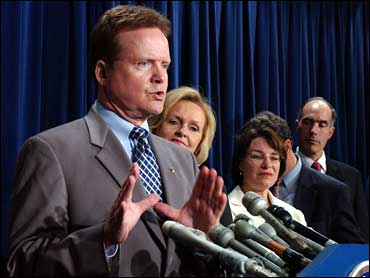 This column was written by Bob Moser.

As if the Democrats hadn't been forced into quite enough soul-searching by the Hillary Clinton-Barack Obama death match, now comes the fraught matter of finding the right running mate for the survivor. A zillion strategic and ideological calculations are already knocking around the punditsphere. Does the changemonger from Illinois need the ballast of a well-traveled centrist with gravitas, like Sam Nunn or Wesley Clark? Dare the Democrats choose another "first" to run with Obama -- Hillary Clinton, Bill Richardson, Kathleen Sebelius? Would Obama/Clinton really be a "dream" or, as some fear, a ticket to eight years of debilitating power struggles and internecine Democratic warfare? Should the party try to use the VP slot to clinch a key state -- with Ted Strickland in Ohio, Claire McCaskill in Missouri, Ed Rendell in Pennsylvania or Jim Webb in Virginia? Does it make more sense to look West, South or Industrial Belt? Is this the time for a no-excuses liberal like Russ Feingold, an evangelical do-gooder like Strickland or a working-class hero like John Edwards?

Exhausted voters don't get to (or have to) make this tricky call, of course. Neither, really, do the Democratic convention delegates -- that docile studio audience who rubber-stamped Geraldine Ferraro in '84, Lloyd Bentsen in '88 and Joe Lieberman in '00. This one's up to Obama, who recently tapped old Washington hand Jim Johnson -- the fellow who helped Mondale find Ferraro in '84 and Kerry pick Edwards in '04 -- to head up his search team. Let's hope the choice will be made with a full awareness of just how many political light-years we are removed from 1984 -- and from 2004. Obama should approach this decision not merely with an eye to winning 270 electoral votes, but with his sights set on the long term: finding the person who can do the most to broaden and invigorate the progressive-populist majority that is emerging in every part of the country.

Obama's strangest option is also his strongest. To many progressives, ex-Republican Jim Webb sounds like another centrist compromise -- Lieberman in combat boots. After all, he's got that history as a Reagan-era Defense official and Navy Secretary in the 1980s. He's a proud Vietnam veteran. He adores firearms. He's criticized affirmative action for helping blacks but leaving out poor whites. He wrote a paleolithic op-ed against women in combat in 1979 and later called the Navy investigations of the Tailhook sexual assault scandal a "witch hunt." He's railed fiercely through the years at the "cultural Marxists" and '60s liberals who, he felt, demonized his fellow soldiers in Vietnam and blamed his fellow working-class whites for Jim Crow.

It's understandable that the heavy VP chatter about Webb has some progressives climbing the walls, accusing his male supporters of hopeless "man crushes" and declaring, as G Spot blogger Kathy G. did recently, "Ixnay on the Ebbway." But the Webb who became the Democrats' boldest antiwar champion of 2006, when he unseated popular senator George Allen, bears little resemblance to the ugly composite portrait that can be assembled by quoting his old apostasies (all now heavily qualified or recanted). Webb is, in many respects, the antithesis of Lieberman or Bentsen -- "centrists" chosen not so much to appeal to independents as to placate Wall Street. While most reporters persist in describing him as a conservative, Webb has rapidly emerged as one of the Democrats' strongest voices from the left on the two great issues of the day: Iraq and economic fairness. He spent most of his 2006 campaign railing against the treachery of corporate America and trickle-down economics. Even more boldly than Obama, Webb spoke out against invading Iraq -- in fact, he began arguing against it in the late 1980s, when the neocons were first beating those drums. In the Senate -- as a freshman -- he has been the single most clever and relentless Democrat in challenging Bush's Iraq policy, most recently steering through the new GI Bill. While his voting record is short, it's thus far prochoice, prolabor and pro-environment. For what it's worth, Webb got an A in 2007 from the progressive Drum Major Institute; perfect scores from NARAL, the National Education Association and the AFL-CIO; a 90 from the Children's Defense Fund; and an 85 from Americans for Democratic Action.

Virginia's thirteen electoral votes are already up for grabs, particularly with beloved former Governor Mark Warner running for the Senate and (along with Obama) driving up the Democratic vote in November. But one of the most powerful arguments for Webb is less pragmatic than symbolic: instead of just saying he honors the military and respects the white working class, Obama, by tapping Webb, would show it. Choosing Webb would also show Obama's willingness to have unorthodox and passionate thinkers around him. Webb would be the loudest and stubbornest "get out of Iraq" voice to have the President's ear. He would push Obama in a progressive direction on corporate re-regulation and income redistribution. And he would goad the President to think in fresh ways about old problems like the "war on drugs." Webb calls for ending the drug war in his new book, "A Time to Fight", in which he furiously denounces the race-based injustice of US drug laws and the American incarceration industry. In it he imagines the lives led by an African-American youngster selling drugs and the white suburban teenager who buys them from him to sell at his school. "By the time the white kid reaches fifty years of age," Webb writes, "he may well be a judge. By the time the black kid reaches fifty, he will likely be permanently unemployable, will be ineligible for many government assistance programs, and will not even be able to vote."

Of all the various forms of inspiration Obama's campaign has delivered, few have been more welcome than his promise to erase the red-blue divide. Obama has worked out most of the formula for a long-term national progressive majority: he's revived the hopes of black voters long overlooked by the party, honed a promising message for Latino workers and preached a fresh political gospel to younger voters of all races -- people for whom Republicanism will forever be associated with Bush, Iraq, the religious right and subprime America. But for the new majority to emerge, the Democrats must also tap into the antiwar, populist energy that has swelled up among working-class and middle-class whites in formerly Republican territory. Webb would bring some much-needed fire and brimstone on the economic populist issues that captured red-state Senate seats for insurgent Democrats in 2006 -- not just in Virginia but in Ohio, Pennsylvania, Montana, Missouri and Minnesota.

After eight years of Bush and thirty years of middle-class decline, it won't take crippling compromises (like an antichoice, pro-war or pro-Wall Street Vice President) to make sufficient gains among these folks. But it will take a candidate on the national ticket who understands them, respects them and knows how to move them. Obama can pick between several distinguished and helpful partners for the Democratic ticket. But he cannot choose anyone who will speak to Western, Southern and Industrial Belt voters with more gut-level force, or do more to awaken these folks to the new progressive potential of their country, than Jim Webb.

But as far as the man crush goes, I'll stick with John Edwards.
By Bob Moser
Reprinted with permission from The Nation