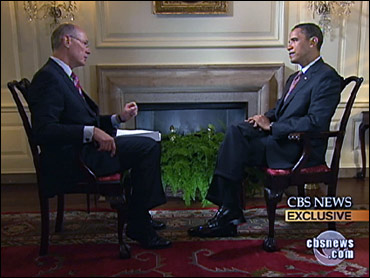 President Obama says the United States has to guard against allowing itself to be used as a scapegoat by the regime in Iran.

In an exclusive interview with Early Show co-anchor Harry Smith, Mr. Obama responded to critics claiming he hasn't spoken out forcefully enough in favor of those who've taken to the streets to protest the result of the recent presidential election in Iran.

"The last thing that I want to do," the president said, "is to have the United States be a foil for -- those forces inside Iran who would love nothing better than to make this an argument about the United States. That's what they do. That's what we've already seen. We shouldn't be playing into that. There should be no distractions from the fact that the -- Iranian people are seeking to -- let their voices be heard.

"Now, what we can do is bear witness and say -- to the world that the, you know, incredible demonstrations that we've seen is a testimony to -- I think what Dr. King called the -- the arc of the moral universe. It's long but it bends towards justice."

Mr. Obama also delivered a message to the regime in Tehran, noting to Smith that, "The world is watching. And how they approach and deal with people who are, through peaceful means, trying to -- be heard -- will I think -- send a pretty clear signal to the international community about -- about -- what -- Iran is and -- and is not.

" ... This is not an issue of the United States or the West versus Iran. This is an issue of the Iranian people. The fact that they are on the -- the streets under pretty severe duress -- at great risk to themselves -- is a sign that -- there's something -- in that society that wants to open up."

In the wide-ranging interview, the president had some tough talk for North Korea, sharp words for former Vice President Cheney, and defended giving the Fed new, broad powers to oversee the financial industry.

While expressing his hope that Pyongyang would decide to start on a path toward "rejoining the international community," Mr. Obama also warned that his administration won't "reward belligerence and provocation in the way that's been done in the past," and stressed that leading world powers, including China and Russia, are on board with the U.S.'s stand on North Korea.

Smith observed that, "North Koreans have basically said that their intention is to fire a missile toward -- Hawaii on or about the 4th of July. Secretary Gates has said there has been a military adjustment and to -- to watch out for something like that happening. But beyond the sanctions and beyond the isolation that has already been tried, what has to happen to get North Korea to at least act like they're part of the community of nations?

"First of all," Mr. Obama replied, 'let's be clear. This administration -- and our military is fully prepared for any contingencies. And -- and --

"Is that a warning of a military response?" Smith quickly asked.

"No," the president responded. "It's just we are prepared for any contingencies. I don't wanna speculate on hypotheticals. But I want -- I do wanna give assurances to the American people that -- the t's are crossed and the i's are dotted in terms of -- what might happen. More broadly, I think the international community has spoken.

"When you've got Russia and China as well as South Korea and Japan, the United States, the entire Security Council -- saying unequivocally that North Korea has violated international law, that -- and -- and is willing to impose tougher sanctions --

"They're still defiant, though," Smith interjected.

"Well, the -- well, well what that sends a signal, though, is of a unity in the international community that we haven't seen in quite some time," Mr. Obama said. "And one of the things that we have been very clear about is that North Korea has a path towards rejoining the international community. And we hope they take that path. What we're not gonna do is to reward belligerence and provocation in the way that's been done in the past."

Turning to former President Bush and Dick Cheney, Smith said, "(CIA director) Leon Panetta ... intimated that the former Vice-president was playing politics with national security issues. The former President has intoned his own displeasure with some of your policy changes. I think they feel like some of the things that you've done, in fact, are treacherous."

Laughing, the president remarked, "Well, you know what? Be -- before you go there, I think if you read President Bush's -- remarks -- I think that that is -- that's not a fair characterization of what President Bush said.

"Well, I think -- I think when it comes to -- Vice-president Cheney, he and I have a deep disagreement about what's required to keep the American people safe. And I think that disagreement -- has been -- amply aired. And -- and certainly he has a right to -- to voice his opinions. I would argue that -- our policies are making the American people safer -- and that -- some of the policies that he's promoted in the past have not."

And when asked about concerns voiced by Senate Baking Committee Chairman Christopher Dodd that administration proposals would give the Federal Reserve Board too much power as a watchdog of financial firms, Mr. Obama said, "It wasn't the Fed -- where the -- the (financial) regulations broke down here. And part of what we wanna do is to have somebody who's accountable and clear when it comes to these large systemic firms that could potentially bring down the entire financial system.

"The Fed has the expertise and the credibility I think to do it. // we don't want a situation where taxpayers have to come in and bail out firms because if those firms go under, the whole system collapses. And unfortunately, that's been the situation -- up until now, that's what we intend to get fixed. We wanna make sure that this kind of crisis doesn't happen again."

Part One of the interview was aired on the CBS News broadcast Sunday Morning on June 21. To read the transcript, click here.