It's not one of the official duties of a U.S. President, being "Father-In-Chief." Still, fatherhood was much on the mind of Barack Obama when he sat down Friday for an exclusive White House interview. Our Father's Day Cover Story is reported by our friend (and fellow dad) Harry Smith of The Early Show:

Maybe it was on Election Night when we first realized that not only would there be a new president, but also a new First Family . . . a family with young children.

Along with the role of commander-in-chief and leader of the free world, Barack Obama would be First Dad.

He is everything his own father was not. His book, "Dreams from My Father," details his search for his own identify based on the fact his father was not there.

"He wasn't around," Mr. Obama told CBS News' Harry Smith. "Now, one of the things I benefited from was my mother was so generous in describing him. And so even though he was smart and, you know, hard-working and talented, and so as a young boy I could have a sense that he was an important person, it was the myth that I was chasing as opposed to knowing who he really was.

"But despite the tremendous efforts of my mom, no, there's no doubt that that still left a hole in me."

In his book, Mr. Obama speaks about both the cultivated myth of his father, and the cold, hard truth - that he was absent by choice.

"There was one problem: My father was missing," Mr. Obama wrote. "And nothing my mother or my grandparents could tell me could obviate that single, unassailable fact."

Yet, in brief and rare encounters, Mr. Obama's father passed along certain things the president values to this day.

"The incredible importance that the smallest gesture can make by a father," he said. "I still remember he gave me my first basketball. And it wasn't until much later in life that I realized that my passionate interest in basketball might have brought out of just that small gesture of him giving me a basketball for Christmas. He took me to a jazz concert. And it wasn't until later in life that I realized maybe that's why I got really interested in jazz."

. . . An interest proved by Wynton Marsalis' appearance last week in the White House.

"Your whole life is under a microscope now," said Smith. "And believe it or not, every parent in the country is watching your every move as a parent. Are you aware of that scrutiny?"

"Well, there's no scrutiny more powerful that Michelle's scrutiny," he laughed. "So I don't care what other folks are saying. It's my wife and my kids feeling I am there for them." 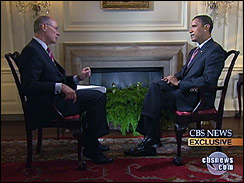 (CBS)
"In this fatherless world, where did you learn to love?" Smith asked.

"Well you know, I had a mother and grandparents," Mr. Obama said. "Where I learned to be a father was looking at some people that I respected. Michelle's father was just a wonderful man. I mean, here's a guy who had multiple sclerosis at the age of 30. And by the time I knew him he was just barely struggling with two crutches to get around. And yet he went to every one of Michelle's dance recitals, every one of her brother's basketball games. And it reminded me that, you know, whatever the hardships, whatever the obstacles, you can be a good dad."

The First Couple has made being present in their children's lives a top priority. The world can wait 'till after Sasha and Malia's soccer or basketball game.

"The one thing that stood out to me in the acceptance speech in Chicago, you said, 'Sasha and Malia, you earned that puppy,'" Smith said. "You used the word 'earned.' It wasn't, 'You get one.' 'You earned it.' You're old school."

"I, we're pretty old school," Mr. Obama said. "I mean, we stay here in the White House. Malia and Sasha, they have to make their beds. They have to walk the dog. They have to feed the dog. They have to do their homework. They don't watch TV during the week. But you know, the amazing thing that we've learned - and I think that is where, again, fathers make a difference - is, kids thrive on order. They want structure."

On Friday afternoon the White House held a barbeque and town meeting for fathers and their kids.

"Fathers are our first teachers and coaches," Mr. Obama said. "They're our mentors and they're our role models. They set an example of success and they push us to succeed; encourage us when we're struggling; and they love us even when we disappoint them, and they stand by us when nobody else will."

It started last year in Chicago, echoing the importance of fatherhood. With four of ten children in the United States born to unwed mothers, the president wants it understood . . . it's time for men to man up.

"We need fathers to realize that responsibility does not end at conception," he said last year. "We need them to realize that what makes you a man is not the ability to have a child - it's the courage to raise one."

"Well, there are heroic moms like mine, heroic extended families," Mr. Obama told Smith. "My grandparents helped raise me. But the fact is that the absence of fathers has an effect on kids. And it's inescapably true: Kids without fathers are more likely to have trouble in school, more likely to participate in drugs, more likely to get into trouble, more likely to end up in jail. So across the board, having a father who is present makes a difference.

"And one of the things that we want do, during the celebration of the 100th anniversary of Fathers Day, [is] just send a message that being a part of your child's life is probably the most important thing you can do - not only for your child, but yourself."


Part Two of Harry Smith's interview with President Obama will air on The Early Show on Monday, June 22 at 7:00 a.m. ET.