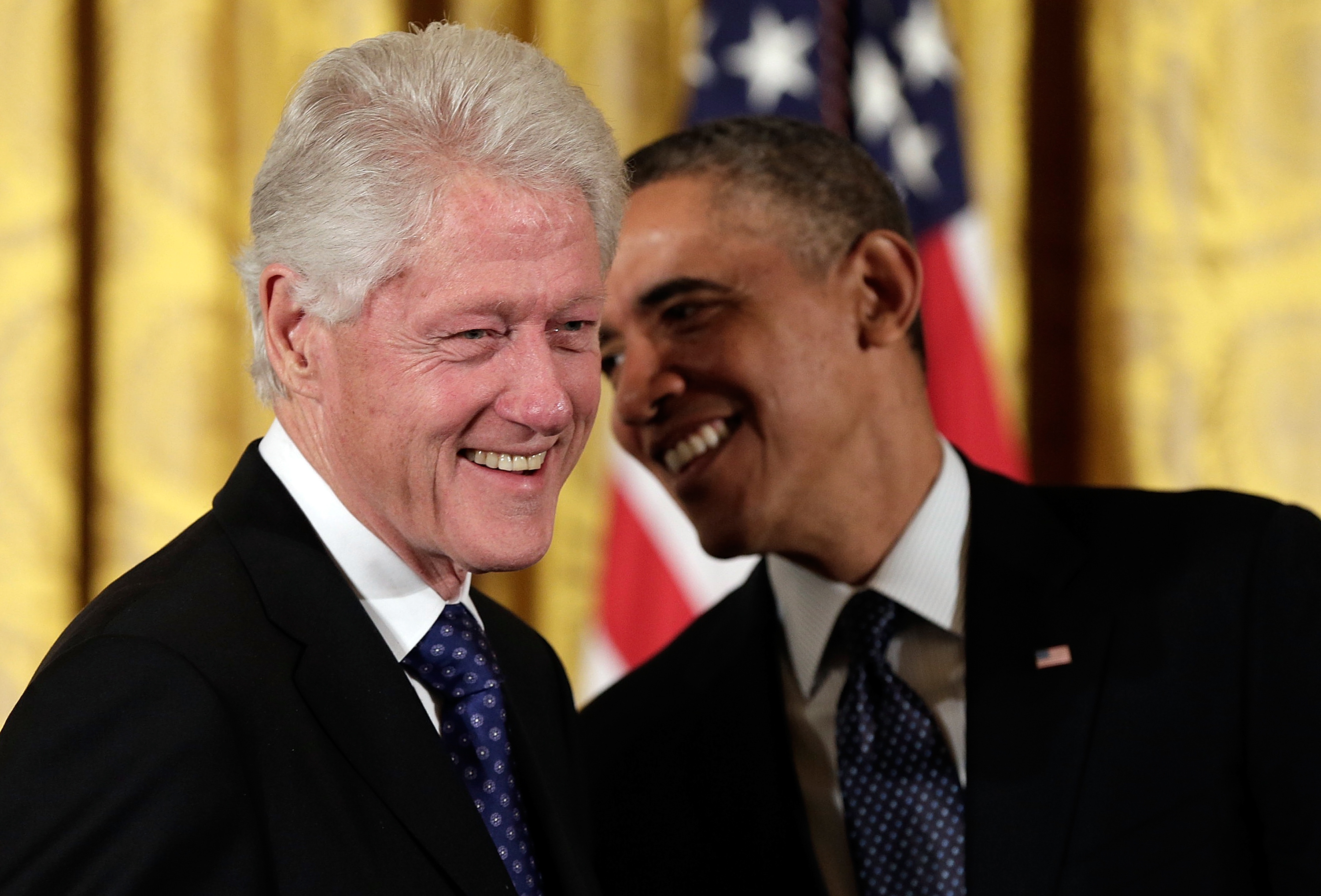 Pitchers and catchers don't report for spring training until next week, but two heavy hitters will be on hand Wednesday at Nationals Park in Washington, D.C.: President Barack Obama and former President Bill Clinton.

The presidential duo will headline the Senate Democrats' issues conference, an annual gathering that gives lawmakers a chance to strategize together.

Mr. Obama and Clinton haven't always been on the same page, but they mended their relationship during the 2012 election when Clinton delivered a blockbuster speech at the Democratic National Convention. They will join forces Wednesday to rev up Democrats as the party stares down a tough election year.

Democrats are in a precarious position right now: Mr. Obama's approval ratings are sagging, and Democrats are fighting to hold onto the Senate. Some insiders have already given up on winning back the House.

Senate Democrats currently have a 55-45 majority, but they could lose that edge in November.

Top Republican targets include Sens. Mark Pryor of Arkansas, Mark Begich of Alaska, Mary Landrieu of Louisiana and Kay Hagan of North Carolina. Democratic retirements in West Virginia, South Dakota, Montana and Iowa haven't made the map any friendlier for the party as it tries to cling on to control.

"Republicans have no equivalently vulnerable incumbents up in blue states," CBS News elections director Anthony Salvanto recently wrote. "In fact, none of the Republican seats (up for re-election), except Maine, are in states carried by President Obama."

Those Democratic incumbents were swept into office in 2008, when Democrats picked up eight Senate seats and wielded tremendous power in the upper chamber with their 60-member supermajority. But the political climate couldn't look more different this time around: The botched rollout of the Affordable Care Act last year turned a politically tough issue for Democrats into a toxic one.

Affiliation with the health care law, and the president who signed it, has become an albatross hanging around the necks of vulnerable Democratic incumbents. Just last month, Hagan avoided a joint appearance with Mr. Obama when he visited North Carolina State University in Raleigh, N.C. The first-term senator stayed in Washington because the Senate was in session, her office said at the time.

Hagan is not alone in her desire to be left alone.

"If he wants to come up there and learn about Alaska, bring it on," Begich told CNN last week. "I don't need him campaigning for me. I need him to change some of his policies."

So it's no surprise that Clinton is involved in the Democrats' strategy session. He will undoubtedly play a major role in key races, especially where Democrats find themselves defending red-state seats. The former president has already signed on to stump for Pryor in his home state of Arkansas and is expected to hit the trail - with former Secretary of State Hillary Clinton - for other candidates as well.

The reality is that Mr. Obama, right now, especially in the conservative-leaning states where control of the Senate hangs in the balance, is not very popular.

Mr. Obama's approval rating is 33 percent in Alaska, 34 percent in Arkansas and 40 percent in Louisiana, according to Gallup averages from 2013. He also has weak numbers in states with open Senate seats like West Virginia, where three in four residents say they disapprove of the president's job performance.

Meanwhile, top Democrats hope their new message of income inequality will strike a chord with voters this election cycle.

Senate Democrats have been pushing aggressively for an extension of the unemployment benefits that expired for more than 1.6 million Americans last month. Raising the minimum wage is back in the headlines after Mr. Obama used his State of the Union address to promote the issue. And some Democrats have attacked Republicans over billion-dollar cuts to food stamps in the bipartisan farm bill.

The conference Wednesday gives Democrats a chance to choreograph their messaging.

"We're going to focus on the middle class and how to restore the American dream," said Sen. Chuck Schumer, D-N.Y. "We think we have the policy ideas that are popular, far more popular than the other side.  But how we can reach people and ... get them to appreciate the ideas we have and why they are good for the country and good for the middle-class, compared to what the other side has."