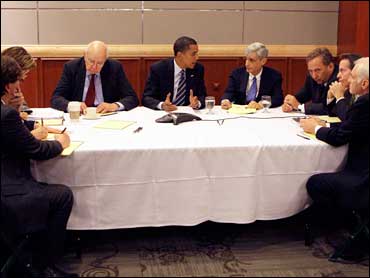 Democratic presidential nominee Barack Obama said Friday he backs giving "broad authority" to the Treasury Department to deal with the burgeoning credit crisis, but said he's not spelling out details of his own plans to avoid roiling the markets.

Obama said at a Florida news conference that given the gravity of the situation, he will refrain for now from presenting a more detailed blueprint. He said any recovery plan should be guided by not rewarding reckless business leaders.

"What we have to do is make sure taxpayer money is not being used to bail out bad decisions," he said. He refused to put a pricetag on a bailout he could support, but said it would not bar him from pushing for middle-class tax cuts that have been central to his campaign.

"I think now more than ever we have to have the broad-based middle-class tax cuts," Obama said.

Obama huddled with key economic advisers to talk about a burgeoning credit crisis that is rapidly moving to the front of this competitive election season, seeking a balance between offering stability and blaming the crisis on what he said were failed economic policies that John McCain would continue.

"We have an immediate emergency situation in the capital markets and it is important to provide the Treasury and the Fed broad authority to make sure the credit markets work, that bills are paid, that payrolls are made, that there's liquidity in the system," Obama said. "We have an institutional problem that has to do with a regulatory system that's inadequate to the new global marketplace."

In an interview with CBS Minutes correspondent Steve Kroft to be aired on Sunday, Obama said he thinks the country is in a recession.

"Oh, I think there's no doubt that…when the numbers come out, that we are officially in recession," Obama said. "I think, for a lot of people, they've been feeling like we've been in a recession for years now. When their wages and incomes don't go up, and the cost of gas and groceries and home heating oil and prescription drugs are all going up, that feels awfully like a recession to them."

In a separate interview with 60 Minutes, McCain also agreed the country is in a recession.

Watch interviews of Obama and McCain during a special edition of 60 Minutes, this Sunday at 7 p.m. ET/PT.

On Friday in Green Bay, Wisconsin, McCain outlined his plan for stopping the floundering economy and crisis on Wall Street. He said the Federal Reserve needs to get out of the business of bailouts but government has a responsibility to act and defend the public interest. McCain said the Fed should get back to "its core business of responsibly managing our money supply and inflation."

Later, Obama spoke to a generally friendly crowd of nearly 8,000 people who roared approval. His speech was interrupted at one point by a group of protesters who chanted and waved signs in the upper deck of the basketball arena. They were shouted down by the crowd chanting "Yes we can" and were escorted from the room.

Obama said he wouldn't go into precise details of what he would offer if elected, because that could lead to financial turmoil. While backing the authority to move quickly on the credit crisis, Obama made it clear that he laid blame at the feet of the Bush administration.

"For too long this administration has been willing to hit the fast-forward button when it comes to helping distressed Wall Street firms, while pressing pause when it comes to saving jobs and keeping people in their homes," he said. While he backed what he acknowledged would be a huge bailout, he argued for a targeted approach.

"I think what has to be clear is that whatever we set up is not a bailout for shareholders and CEOs," said Obama. "They need to take their losses because they were enjoying the upside while times were good."

Obama renewed his call for a new economic stimulus package he said could reverse economic policies gone askew, while at the same time bailing out the financial markets.

"There is a relationship between economic stimulus that I think needs to take place right now and long-term tax cuts for the middle class," said Obama. "So that now more than ever we've got to have the kind of broad-based middle-class cuts that I've talked about for 95 percent of working families. Effectively, the stimulus package is a down payment on that long-term shift in our tax code."

He argued for strict limits on the bailout.

"This plan must be temporary and coupled with tough new oversight and regulation in our financial institutions," said Obama, coupling his plan with a call to involve other nations.

"This is a worldwide issue and while the United States can and will lead in stabilizing the credit markets, we should ask that other nations who share in the crisis be a part of the solution as well," said Obama.

He urged balance in a recovery plan he said should be balanced.

"As taxpayers are asked to take extraordinary steps to protect our financial system, it's only appropriate that those who benefit are expected to contribute to the protection of American homeowners and the American economy," said Obama.

Obama focused on the economy and its effect on women in particular at a rally at Miami University, warning that women have suffered most in the economic downturn.

"We can't steer ourselves out of the crisis by going in the same direction," said Obama. "That's what this election is all about."

Obama made it clear he would give both Federal Reserve and Treasury Department officials a lot of slack to deal with the credit crisis.

"In the coming days, I'll work closely to examine the details of the Treasury and Fed proposals and as I do, I'll work to ensure that it provides an effective emergency response," said Obama. While laying blame for the crisis at the feet of Republicans, Obama said he would steer away from partisanship.

"I think it's critical at this point that the markets and the public have confidence that their work will be unimpeded by partisan wrangling, that leaders in both parties work in concert to solve the problems at hand," said Obama.