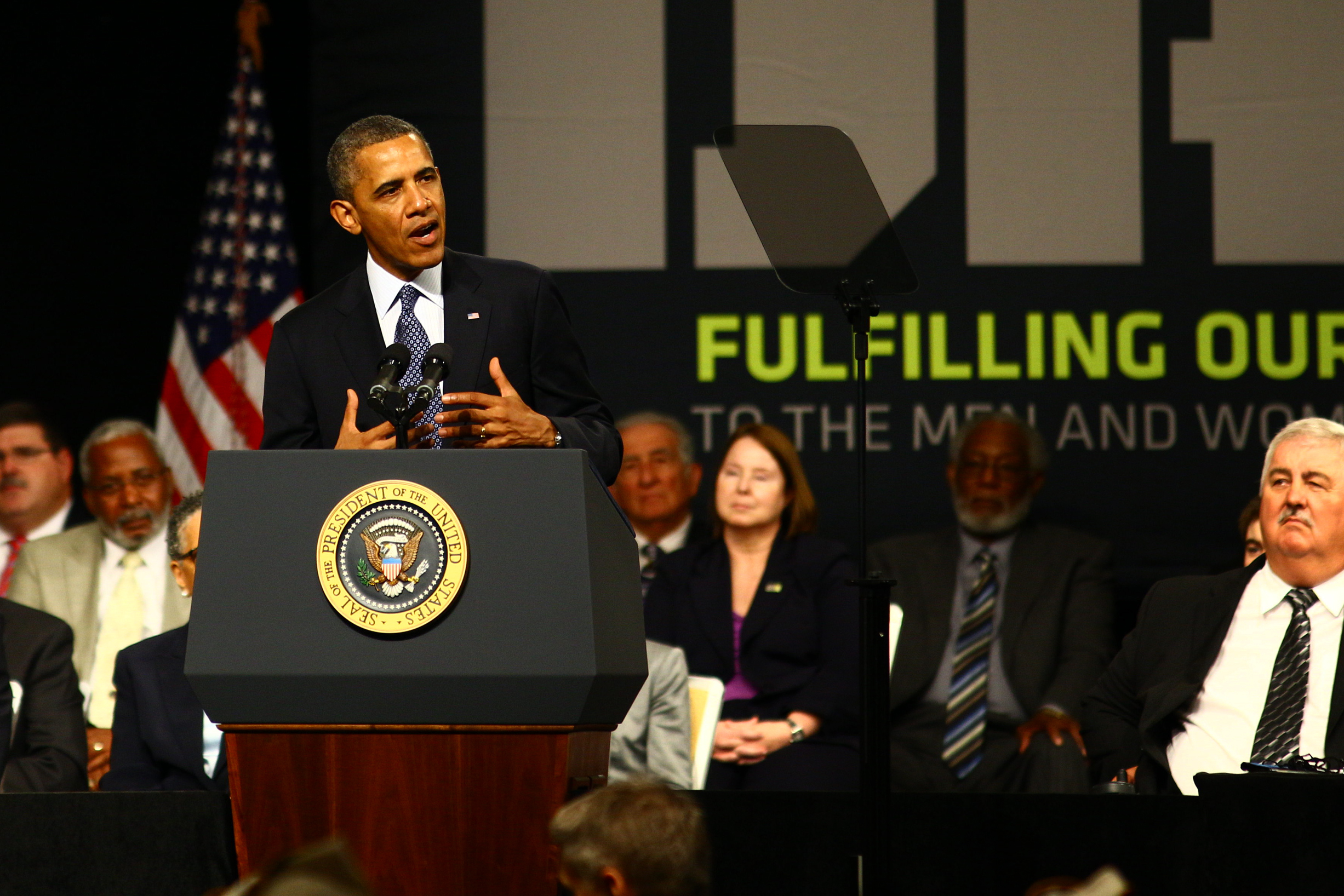 President Obama lauded the sacrifice and perseverance of disabled veterans on Saturday, telling an audience at the Disabled Americans Veterans' convention in Orlando, Fla., "our country endures because in every generation there are Americans like you."

And as the war in Afghanistan draws to a close, bringing home a new generation of wounded warriors, the president said, "The job of caring for our veterans goes on."

He stressed his administration's commitment to ensuring veterans receive the support they need, from medical care and counseling to education and employment.

Mr. Obama warned that the sequester spending cuts, which exempted veterans' benefits in their first year, may begin to bite more painfully in years to come if they are not undone.

"The best way to protect the [veterans' health care] you have earned is to get rid of this sequester altogether," he said.

He vowed to do everything possible to put a stop to the "epidemic of suicide" among active duty soldiers and veterans, highlighting efforts to hire more counselors and mental-health providers.

The president even managed to include a defense of Obamacare in his remarks, rapping the "misinformation" some are peddling about the law's impact on veterans' health care.

Under the new law, the president promised, veterans' health care would not change.

On one particularly vexing issue for disabled veterans, the backlog of disability claims at the Department of Veterans Affairs, the president said his administration is steadily making progress.

"We are not where we need to be, but we are making progress," he said. "Finally the backlog is shrinking - in the last five months alone it's down nearly 20 percent."

The Associated Press reports that, of 780,000 currently pending claims, about 500,000 claims are considered backlogged, down from roughly 611,000 in March. Secretary of Veterans Affairs Eric Shinseki has pledged to eliminate the backlog entirely by 2015.

The president also reaffirmed his administration's commitment to winning the ratification of an international treaty protecting the rights of disabled persons. The Senate failed to ratify the treaty in December due to Republican concerns that it would allow the United Nations to infringe on American sovereignty.

Mr. Obama said the failure was "disappointing," but added, "We're going to keep fighting to ratify that treaty because the United States has always been a leader for the rights of the disabled."

Finally, the president emphasized the need to expand education and job opportunities for veterans, noting that the federal government has hired nearly 300,000 veterans since he assumed office.

Mr. Obama was introduced at the convention by first lady Michelle Obama, who has partnered with second lady Dr. Jill Biden on Joining Forces, a campaign to publicize and address the concerns of veterans and military families.

Mrs. Obama said that work has been one of her "greatest joys over these past few years. "

"Day after day I have been so inspired by your stories," she said, recalling the tale of a young Marine she met at Walter Reed hospital, Winder Perez, who was struck by an rocket propelled grenade (RPG) in Afghanistan. At great personal risk, Perez's fellow soldiers transported him to safety and medical care, despite the fact that the RPG had lodged a live explosive in his leg. Perez's road to recovery has been long and painful, but he has stuck it out, Mrs. Obama said.

And that story, she added, "tells you everything you need to know about the men and women of our armed forces."

"No matter what the struggles you have faced, you all get back up," she said, promising, "you will never have to get back up all on your own. Not while we're here."