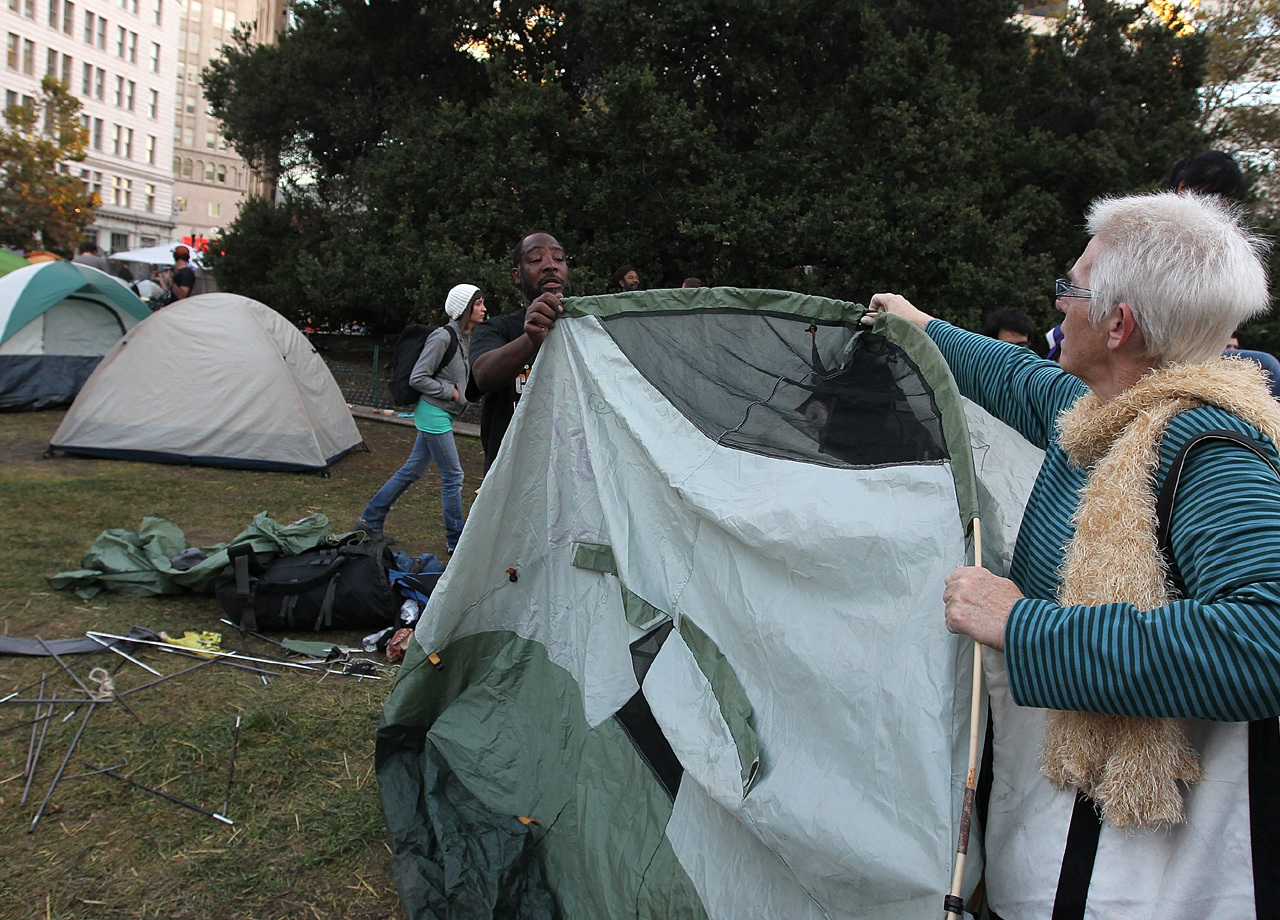 OAKLAND, Calif. - Anti-Wall Street protesters in Oakland have erected more than two dozen tents in a plaza declared off limits for overnight camping, vowing to remain at the site despite city orders to vacate.

Protesters began pitching the tents Thursday evening, according to Shake Anderson, an organizer with Occupy Oakland. On Friday morning, about 25 tents were up at the plaza near City Hall, where police armed with tear gas and beanbag rounds disbanded a 15-day-old encampment two days earlier.

Oakland Mayor Jean Quan had issued a statement asking protesters not to camp overnight at the plaza.

"We believe in what we're doing," Anderson said. "No one is afraid. If anything, we're going to show there's strength in numbers."

Earlier Thursday evening, a crowd of at least 1,000 people, many holding candles, attended a vigil in Oakland for Iraq War veteran Scott Olsen, who suffered a fractured skull Tuesday during a clash between demonstrators and police.

Approximately 1,300 people gathered in Oakland for a candlelight vigil Thursday night for Olson, who is in the hospital with a fractured skull.

In a statement released last night Quan - who was booed away when she tried to speak directly to the crowd on Thursday - said she as "deeply saddened about the outcome on Tuesday."

"It was not what anyone hoped for," Quan wrote, reports CBS Station KPIX. "Ultimately it was my responsibility, and I apologize for what happened." She said city officials have started an investigation into the use of force by police Tuesday night.

Lee said she felt "outrage" at what went on, saying "the protesters are not causing this violence."

Olsen was transferred Thursday from the emergency room to the intensive care unit at Oakland's Highland Hospital as his condition was upgraded to fair, said Curt Olsen, a hospital spokesman.

Dr. Alden Harken, chief surgeon at Alameda County Medical Center, said Olsen has improved dramatically since he was hospitalized unconscious Tuesday night with a bruised brain that was causing seizures.

By Thursday afternoon, Harken says, the 24-year-old was interacting with his parents, doing math equations and otherwise showing signs of "high-level cognitive functioning." The doctor said he may require surgery, but that's unlikely.

"He's got a relatively small area of injury and he's got his youth going for him. So both of those are very favorable," the doctor said.

Police early Tuesday cleared the plaza outside City Hall after it grew to dozens of tents and raised health and safety concerns among city officials. Later that day, officers and sheriff's deputies from several Bay Area agencies clashed a second time in the streets with demonstrators angered by the move.

Oakland Police Chief Howard Jordan has promised an investigation into whether officers used excessive force during the second confrontation. He has also addressed Olsen's condition, saying one focus of the review would be determining how the veteran was hurt.

Olsen was marching with other protesters Tuesday night when he was injured, said Dottie Guy, of the Iraq Veterans Against the War. Guy's group said he was struck by some sort of projectile fired by police officers and sheriff's deputies from multiple agencies who were trying to disperse the crowd that had gathered to protest the city's decision to dismantle the demonstrators' camp.

Dramatic footage of a bleeding Olsen being carried from the chaotic scene, marchers wading through clouds of tear gas and officers stained with paint thrown by some people in the crowd have sparked sympathy marches in other cities and criticism of the police.

In a conciliatory gesture, the city on Wednesday allowed protesters back into the plaza but said people had to stay out of a fenced-off area that still was being cleaned and would have to leave the area by 10 p.m.

Hundreds of Occupy Wall Street protesters returned to the plaza and within hours, the fence had been torn down and stacked into an impromptu sculpture. But police maintained a minimal presence and only a small handful of people defied the curfew and stayed overnight.

"We have decided to have a minimal police presence at the plaza for the short term and build a community effort to improve communications and dialogue with the demonstrators," Mayor Quan said.

The Tuesday confrontations came as officials complained about what they described as deteriorating safety, sanitation and health issues at the camp. The same concerns have been raised about camps in San Francisco and Los Angeles.

Protesters at San Francisco's Justin Herman Plaza were bracing for a police raid early Thursday when they were visited by several city supervisors and a state senator. The officials expressed their support.

San Francisco police warned the protesters earlier in the week that they could be arrested on a variety of sanitation or illegal camping violations.

There were reports that police in riot gear had set up a staging area near the plaza early Thursday morning. But police spokesman Carlos Manfredi said officers routinely gather to practice crowd control procedures, and there were no plans to shut down the Occupy protest.

"We're still continuing to monitor the situation," he said.

Anti-Wall Street protesters camped out in downtown Los Angeles say they're planning to continue their demonstration indefinitely, although both they and the mayor's office were eyeing alternate sites.

Occupy LA organizer Gia Trimble said the protest has swelled to nearly 500 tents on the lawn around City Hall and organizers are eyeing possibly moving the encampment to a larger piece of city property nearby in downtown Los Angeles.

NEW YORK: Some colorful costumes drew attention to demonstrators who gathered next to the famous stone lions on the steps of the New York Public Library in Manhattan, preceding preceded a march through midtown to bank offices on Friday.

About 200 protesters bearing letters of complaint headed down a Fifth Avenue sidewalk, chanting: "You've got mail!" Demonstrators were dressed like Robin Hood (speaking out in support of a one percent "Robin Hood" tax) and pirates.

The group said it had 7,000 letters to New York-based banks complaining about their practices. The letters were collected through a website, occupytheboardroom.org.

Protesters marched to the headquarters of Bank of America, Morgan Stanley, Wells Fargo, Citigroup and JPMorgan Chase to deliver the letters to the banks' CEOs.

Earlier Friday, police and fire officials conducted a surprise inspection of Zuccotti Park where Occupy Wall Street protestors have been camping out for weeks. The FDNY said they are looking for fire safety violations, reports CBS Station WCBS.

Protesters turned over six generators and a dozen of gasoline cans, Mayor Michael Bloomberg said. On his weekly WOR radio show the mayor reiterated that the protesters can stay as long as they want, provided that they follow the law.

Some protesters said their generators aren't a danger to the park or to the people living there.

The operation began about 2 a.m. Friday morning after officials declared the three-week-old gathering an unlawful assembly, said San Diego Police Officer David Stafford. During the sweep, some protesters scattered around downtown San Diego while others were arrested.

Protesters plan to reassemble at 8:45 a.m. for a solidarity march from Civic Center Plaza to the Wells Fargo Building downtown, KFMB reports.

Nashville, Tenn.: Police arrested about 30 protesters early Friday at the site of an Occpuy Nashville encampment, but were later released when a judge refused to sign their arrest warrants.

Using a newly-enacted state policy that set a curfew for the grounds near the state Capitol (including Legislative Plaza where the protesters had been staying in tents), authorities moved in a little after 3 a.m. Friday. The state's new rules specifically banned "overnight occupancy" at the public space and require permits and use fees for rallies.

Katy Savage, one of the protesters, said she peeked out of her tent around 3 a.m. and saw that the camp was surrounded by state troopers. She said people who had already decided they would get arrested sat down together and began singing "We Shall Overcome" as troopers took them - dragging some - to waiting buses.

About 20 protesters, who remained on a sidewalk, were not arrested and were still there later in the morning. All the tents were removed from the plaza and state workers could be seen picking up items left by the protesters.

Jeff Blum of the Davidson County Sheriff's Office said the arrested protesters were being released after a night court judge wouldn't sign the warrants. He didn't elaborate on the judge's refusal.

Protester Steve Reiter, who works closely with the group's legal team, said there were apparently problems with how the protesters were taken into custody, particularly concerning being given proper notice. Reiter said their release is a victory for Occupy Nashville.

"Don't feel bad for being a part of a corporation," she assured the crowd. "You are what makes America great."

Haley said that while the Tea Party represented "Republicans, Democrats and Independents saying, 'We've had enough' " of government control, she said the Occupy movement has "no rhyme or reason" and is "just intended to be a full-scale distraction," reports the Charleston Post and Courier. "And it's worked, and the media is continuing to let it work. ...

"Ask those people for driver's licenses" Haley said. "Find out how many of those people sitting there actually live in your state or were sent there by the unions.

The trade group did not allow reporters to cover Haley's comments live, but her office later released a video of her speech at the paper's request.

Atlanta, Ga.: Dozens of protesters who set up a camp at the Martin Luther King Jr. National Historic Site in Atlanta were packing up their tents and preparing to leave. The Occupy Atlanta group spent the night there and began leaving early Friday, about two days after 53 demonstrators were arrested at a public park downtown.

The King site is on federal land, unlike city-owned Woodruff Park where demonstrators were arrested early Wednesday.

"The site is a memorial for Dr. King and this movement is also a movement that was started and inspired by the civil rights movement," protester La'die Mansfield told The Associated Press early Friday morning.

London, England: Church and local government authorities are going to court to evict protesters camped outside St. Paul's Cathedral. The iconic church reopened after a week-long closure triggered by the protest, in which several hundred protesters have been camped outside the building since Oct. 15.

Scores of tents are pitched on the pedestrianized square in front of the cathedral and near a footpath alongside the building.

The City of London Corporation said it was launching legal action on the grounds that the protest is an "unreasonable user of the highway."

"Protest is an essential right in a democracy — but camping on the highway is not and we believe we will have a strong highways case because an encampment on a busy thoroughfare clearly impacts the rights of others," said Michael Welbank, a member of the corporation's planning and transportation committee.

The protest has divided managers of the cathedral. Senior clergyman Giles Fraser, resigned Thursday, saying he feared moves to evict the protesters could end in violence.

Former Archbishop of Canterbury George Carey said the situation had become a "debacle" that could damage the reputation of Christianity.