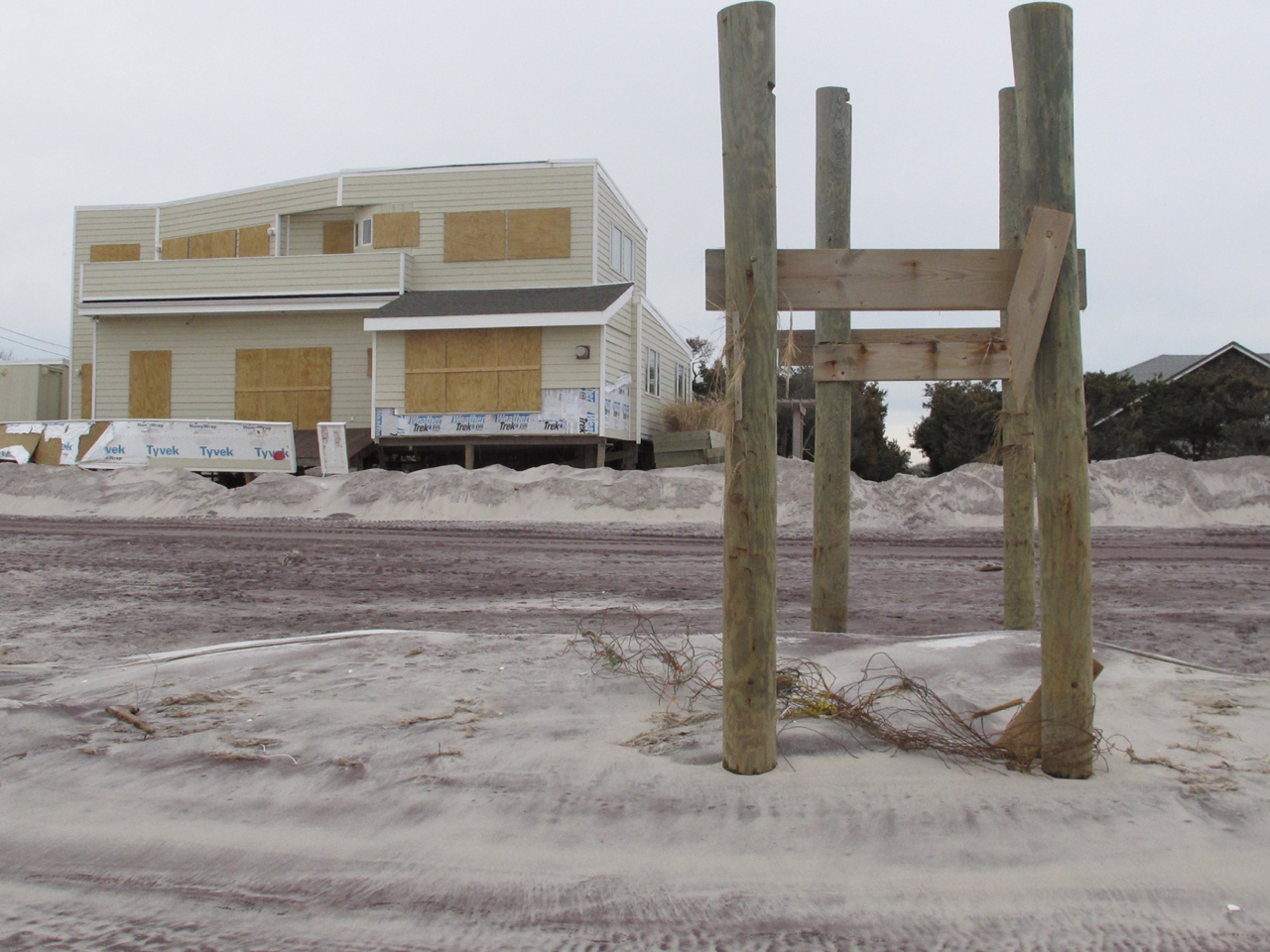 OCEAN BEACH, N.Y. New Yorkers who cherish Fire Island as an idyllic summertime getaway feared the worst when the 32-mile-long barrier island took a direct hit from Superstorm Sandy's powerful surge. The wall of water swamped nearly the entire island, destroyed or washed away about 200 homes and scraped sand dunes down to nothing.

Still, residents are counting their blessings.

That's because more than 4,000 structures survived, at least enough to be repaired. And some are crediting the carefully maintained wall of dunes, ranging from 10 to 20 feet tall, with taking the brunt of the storm's fury.

"The dunes were demolished, but without their protection it would have been much worse," said Malcolm Bowman, a professor of physical oceanography at Stony Brook University.

Evidence of the hit the dunes absorbed is everywhere. A half-mile from the ocean, a blizzard of sand covers bicycles up to the handlebars. Wooden pilings are all that remain of stairs and walkways that passed over dunes and led down to the beach. A football-field-size network of concrete blocks that once sat under 6 feet of sand lay bare in the autumn sunshine. Houses on stilts that once peeked over sand berms now sit naked to the surf.

New Yorkers know Fire Island as their own private paradise, a close-to-home getaway that's accessible only by ferry and feels like a different country. The strip of beaches five miles off the south shore of Long Island is three-fourths undeveloped and includes a national wilderness area.

It has just 300 permanent residents, but on weekends from Memorial Day to Labor Day, the population is swelled by 75,000 visitors who rent homes ranging in size from multilevel palaces to rustic bungalows. A couple of communities are favorite destinations of gay and lesbian visitors. Cars are banned in the summertime; denizens get around on bikes and boardwalks and tote their gear in red toy wagons.

Because of its remoteness, officials have only begun in the past week or so to allow the residents, and the others who own vacation homes and businesses, to return and assess the damage.

Retired electrical contractor Hyman Portnoy, whose two-story oceanfront home in the village of Ocean Beach suffered damage to its large deck, said rebuilding the dunes is a major concern.

Suzy Goldhirsch, president of the Fire Island Association, which represents businesses and homeowners, noted that homeowners in many Fire Island communities — there are 17 different villages and hamlets — pay part of their property taxes to maintain the dunes.

But she expects the federal government will be asked to fund some of the dune restoration, arguing that maintaining the barrier island serves to protect not just Fire Island, but also the homes of the 3 million Long Islanders on the mainland.

Critics of federal funding of beach and dune replenishment say U.S. taxpayers shouldn't pick up the tab for beaches enjoyed by only a fraction of the population. Replenishment backers counter that Congress has approved recovery funds for other disasters including Hurricane Katrina and last year's tornadoes in Missouri.

The work of replacing sand dunes that washed away in the storm is already under way. Workers are scooping up sand from the streets, putting it in bags and piling it up where the dunes once stood.

Ocean waves demolished at least nine houses, left in splinters on the oceanfront, and about 200 others are severely damaged and likely to be condemned. Dozens of other homes appear uninhabitable without major repairs. Others are covered in muck several inches deep.

"Decimated," Ocean Beach artist Kenny Goodman said last week as he returned to the shop he has owned for a quarter-century. When he first saw the damage from flooding in his store, he said, he was "really overwhelmed and sad — it's just a gigantic loss."

Goodman, a New Yorker who has been coming to Fire Island for 40 years, said he plans to rebuild his shop. "It will be different. Maybe by my grandchildren's time it will be back," but he also lamented, "It won't be like it was."

The Atlantic Ocean breached the narrow island in three places. Two of the breaches are being closed by the U.S. Army Corps of Engineers; the National Park Service is evaluating whether a third breach should be closed by the Army Corps or allowed to close naturally.

As far as rebuilding, many jurisdictions — federal, state, county, town and local — will have a say in what can and can't be rebuilt, said Fire Island National Seashore Superintendent Chris Soller. New York State has regulations about who can rebuild in some designated coastal erosion zones, although an official with the town of Brookhaven, which oversees some of the westernmost communities of the island's 17 hamlets and villages, said special variances could be issued in some cases to allow rebuilding in those zones.

Fire Island, like many Northeast communities harmed by Sandy, is beginning to reassess where and how to rebuild, Goldhirsch said.

"It's part of a new national dialogue," she said. "The governor has said he wants to rebuild smarter and better, and I think we have to think about how we are going to do this so it's better in the future. We have a lot to think about; there are no easy answers, no one answer."

Political leaders need to come up with a long-term plan for future development on the island, said Bowman, the Stony Brook professor.

"Not just a rapid-fire reaction to a catastrophe; this is going to happen again," he said. "Some of these things are going to be very expensive decisions, and we need a longer perspective."