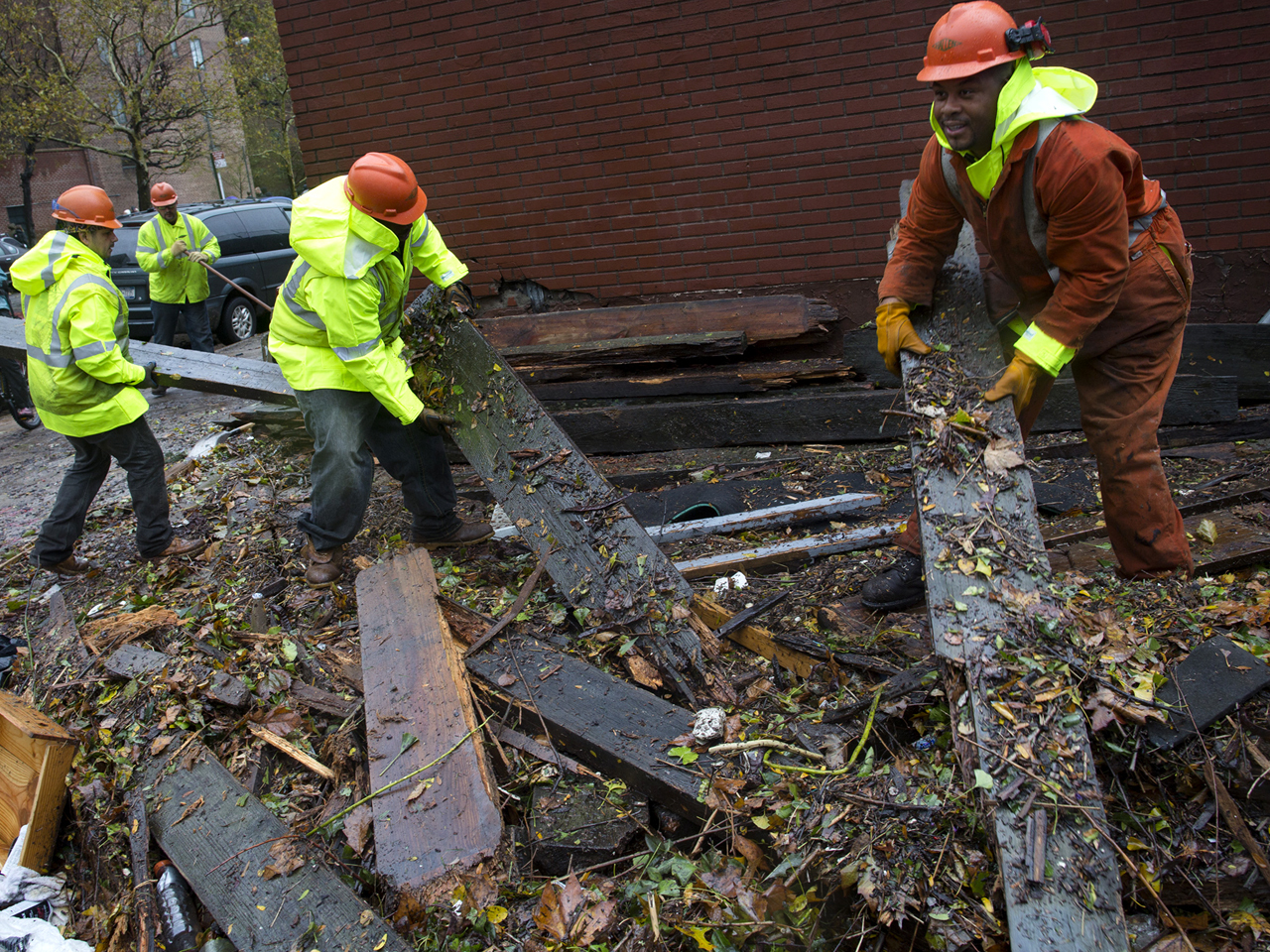 NEW YORK The aftermath of the superstorm Sandy has created more problems for customers in Brooklyn and Staten Island.

The company also reduced power to some homes in Brooklyn.

The most extensive storm-related power outage in New York City's history can be blamed on a very high tide driven by a full moon, the worst storm surge in nearly 200 years, and the placement of underground electrical equipment in flood-prone areas.

It's like what happened at the Fukushima nuclear complex in Japan last year — without the radiation. At a Consolidated Edison substation in Manhattan's East Village, a gigantic wall of water defied elaborate planning and expectations, swamped underground electrical equipment, and left about 250,000 lower Manhattan customers without power.

Last year, the surge from Hurricane Irene reached 9.5 feet at the substation. ConEd figured it had that covered.

The utility also figured the infrastructure could handle a repeat of the highest surge on record for the area — 11 feet during a hurricane in 1821, according to the National Weather Service. After all, the substation was designed to withstand a surge of 12.5 feet.

With all the planning, and all the predictions, planning big was not big enough. Sandy went bigger — a surge of 14 feet.

"Nobody predicted it would be that high," said ConEd spokesman Allan Drury.

At one point, nearly 1 million ConEd customers lost electricity in and near the city — a record number for the utility.

But the signature event came when a surge of water pushed forward by the storm's winds poured over the banks of the East River near the substation on 13th Street.

As water poured into the substation Monday night, the blinding flash of an explosion lit the most famous skyline in the world. A huge section of the city that never sleeps fell into darkness.

It's exactly what a proactive ConEd hoped to avoid by shutting down three similar power networks in Manhattan and one in Brooklyn in advance of the storm surge.

However, the combination of circumstances, notably an extraordinary high tide, pushed massive amounts of water deep into the city. The underground infrastructure was suddenly vulnerable.

As the storm's predicted path zeroed in on New York City, ConEd brought on extra work crews and laid plans to shut down some underground equipment in lower Manhattan and other parts of the city.

By late Monday afternoon, the utility started to notify Manhattan customers south of 36th Street that power might be shut off if underground equipment was flooded with corrosive, destructive seawater. The company gave the same heads-up to some customers in Brooklyn, Queens and the Bronx.

By mid-evening, though, conditions had worsened. More than 150,000 customers in New York City and Westchester County were already off grid. The utility began turning off the power, as a precaution, to a section of lower Manhattan, including Wall Street, in an attempt to stem damage. Shortly afterward, the company began cutting electricity in parts of Brooklyn too; a total of 220,000 other customers were already in the dark.

Less than an hour later, more equipment flooded, sparks flew, and the blast boomed across the East River and throughout lower Manhattan from what ConEd believes was a circuit breaker at its flooded substation.

The flooded equipment had failed.

When live electric equipment is inundated with salt water, electricity escapes every which way, sending sparks flying and damaging equipment. "You see a huge blast just from the short circuit," says Arshad Mansoor, senior vice president for research and development at the Electric Power Research Institute, an industry-funded research group.

As day broke Tuesday, the company was busily assessing damage and fixing equipment. But downed trees and wires, as well as lingering flood waters, made it hard for repair crews to reach some areas. The utility was able to get at least 140,000 customers back on the grid within several hours.

But hundreds of thousands of others hunkered down for a longer outage. ConEd said customers served by underground equipment should be restored to service in four days. Those who get power from overhead lines are expected to wait a week. That's because there are so many fallen lines.

The most densely populated parts of the city, mostly in Manhattan and Brooklyn, are served by underground transmission wires. These offer protection from wind and falling tree limbs that plague overhead wires and make the suburbs far more vulnerable to outages.

But underground wires can flood and be more difficult to repair, especially in low-lying areas. It can be harder for workers to get to the wires because manholes flood. When water recedes, it can be harder to find problems, pull out wires and equipment, dry them, fix them, and slide them back into place.

The damage assessment could take days to complete.

To engineers like Joannes Westerink, a University of Notre Dame researcher who is working on a computer model for future New York City storm surges, this was all predictable.

"You build infrastructure too low, and you run into trouble," he said. "It's a recipe for disaster."

He said it's well known that New York City had spread to ever-lower zones in modern history. He cited Battery Park at the tip of Manhattan as a dramatic example.

ConEd could likely have shut down more networks served by the 13th Street substation before the storm arrived, but that would have meant cutting power to tens of thousands of people and critical facilities like hospitals. Even though hospitals have backup power generators, they too can fail. Generators at New York University Langone Medical Center went down Monday night, and patients were evacuated.

"You have to make the decision to shut off power to a substation very, very carefully, especially if it serves critical facilities," Mansoor said. The decision can turn into a lose-lose situation.

Despite the latest damage, Mansoor called the New York City system the most reliable in the world because it's normally well protected from weather and set up with backup equipment. That protects the city from minor disruptions and helps keep major disruptions from cascading through the city.

No system, he said, can be designed to withstand every storm, no matter how severe.

Carol J. Friedland, a Louisiana State University engineer who has studied the impact of flooding on electrical systems, said more measures should be taken to protect equipment in low-lying places. For example, sea walls can be raised, and equipment can sometimes be relocated.

"My personal opinion ... is that there should be more resilience built into these types of infrastructure, because when the power goes out, it disrupts the entire community," she said.

"Our electrical infrastructure system is a marvel of engineering for the last century," Amin said. "The grid operators and the power companies are doing the best they can."

It is too soon to say if anything more could have been done to keep the New York City grid working. Under state regulations, ConEd will be required to file a report on the outage to the New York State Department of Public Service within 60 days of power restoration. That agency's staff will evaluate how problems were handled and if improvements can be made for the future, according to agency spokeswoman Pamela Carter.