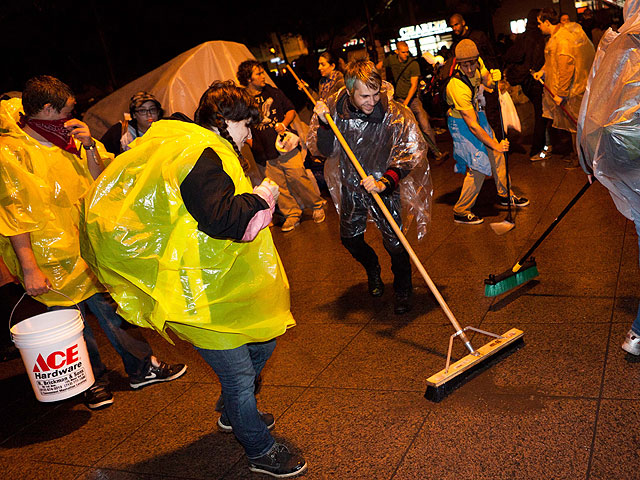 NEW YORK - The cleanup of a plaza in lower Manhattan where protesters have been camped out for a month was postponed early Friday, sending cheers up from a crowd that had feared the effort was merely a pretext to evict them.

Deputy Mayor Cas Holloway said the owners of the private park, Brookfield Office Properties, had put off the cleaning. Supporters of the protesters had started streaming into the park in the morning darkness before the planned cleaning, forming a crowd of several hundred chanting people.

"I'll believe it when we're able to stay here," said protester Peter Hogness, 56, a union employee from Brooklyn. "One thing we have learned from this is that we need to rely on ourselves and not on promises from elected officials."

But protester Nick Gulotta, 23, was jubilant.

He originally held up a sign referring to Mayor Michael Bloomberg that said: "Bloomberg Don't Evict Occupy Wall Street." People cheered and clapped him on the back when he scratched out the "don't" and replaced it with "didn't."

"It shows when people work together, you really can make a difference and make justice happen," Gulotta said.

Meanwhile, dozens of police in riot gear moved into a park near the Colorado State Capitol early Friday morning and evicted hundreds of Occupy Denver protesters who were given a deadline of 11 p.m. Thursday to clear out.

Protesters moved to sidewalks and streets across from the state Capitol, and dozens locked arms around a makeshift kitchen after police threatened to remove it. Authorities took down dozens of tents, but there were no clashes since the action began around 3:30 a.m. Friday. And police say there have been no arrests.

In New York, a confrontation between police and protesters, who had vowed to stay put through civil disobedience, had been feared. Boisterous cheers floated up from the crowds as the announcement of the postponement circulated, and protesters began polling each other on whether to make an immediate march to Wall Street, a few blocks away.

"Late last night, we received notice from the owners of Zuccotti Park — Brookfield Properties — that they are postponing their scheduled cleaning of the park, and for the time being withdrawing their request from earlier in the week for police assistance during their cleaning operation," the deputy mayor's statement said.

The New York Police Department had said it would make arrests if Brookfield requested it and laws were broken. The deputy mayor's statement Friday said Brookfield believes it can work out an arrangement with the protesters that "will ensure the park remains clean, safe, available for public use," it said.

Brookfield, a publicly traded real estate firm, had planned to power-wash the plaza section by section over 12 hours and allow the protesters back — but without much of the equipment they needed to sleep and camp there. The company called the conditions at the park unsanitary and unsafe.

The company's rules, which haven't been enforced, have been this all along: No tarps, no sleeping bags, no storing personal property on the ground. The park is privately owned but is required to be open to the public 24 hours per day.

In a last-ditch bid to stay, protesters had mopped and picked up garbage. While moving out mattresses and camping supplies, organizers were mixed on how they would respond when police arrived.

Many protesters said the only way they would leave is by force. Organizers sent out a mass email Thursday asking supporters to "defend the occupation from eviction."

Nicole Carty, a 23-year-old from Atlanta, had hoped the group's cleaning effort would stave off any confrontation. It wasn't clear early Friday whether that had anything to do with the company's decision to postpone the cleanup.

"We tell them, 'Hey the park is clean, there's no need for you to be here,'" she said. "If they insist on coming in, we will continue to occupy the space."

The demand that protesters clear out had set up a potential turning point in a movement that began Sept. 17 with a small group of activists and has swelled to include several thousand people at times, from many walks of life. Occupy Wall Street has inspired similar demonstrations across the country and become an issue in the Republican presidential primary race.

The protesters' demands are wide-ranging, but they are united in blaming Wall Street and corporate interests for the economic pain they say all but the wealthiest Americans have endured since the financial meltdown.

A spokesman for Bloomberg, whose girlfriend is a member of Brookfield's board of directors, had said Thursday that Brookfield had requested the city's assistance in maintaining the park.

"We will continue to defend and guarantee their free speech rights, but those rights do not include the ability to infringe on the rights of others," Bloomberg spokesman Marc La Vorgna said, "which is why the rules governing the park will be enforced."

Protesters have had some run-ins with police, but mass arrests on the Brooklyn Bridge and an incident in which some protesters were pepper-sprayed seemed to energize their movement.

Bill de Blasio, the city's public advocate, had expressed concern over the city's actions as he inspected the park Thursday afternoon and listened to protesters' complaints.

"This has been a very peaceful movement by the people," he said. "I'm concerned about this new set of policies. At the very least, the city should slow down."

And attorneys from the New York City chapter of the National Lawyers Guild — who are representing an Occupy Wall Street sanitation working group — wrote a letter to Brookfield saying the company's request to get police to help implement its cleanup plan threatened "fundamental constitutional rights."

Several protests are planned this weekend across the U.S. and Canada, and European activists are also organizing.