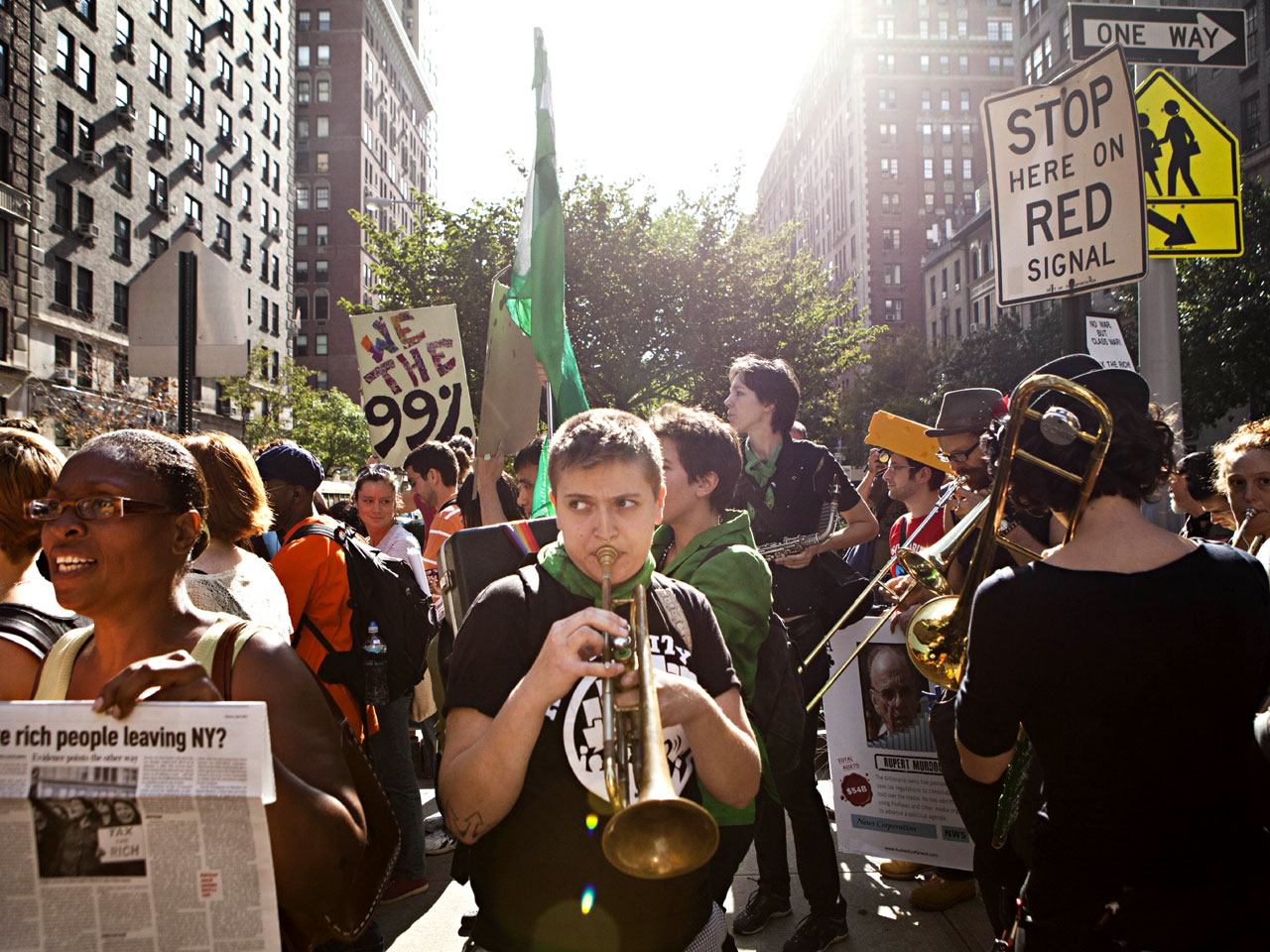 The conservative criticism of the Occupy Wall Street movement is that it is a "growing mob" (House majority leader Eric Cantor) of "shiftless protestors" (The Tea Party Express) engaged in "class warfare" (GOP presidential candidate Herman Cain) whose grievances - whatever they are - are far outside the political mainstream.

The polls don't back that up.

A new survey out from Time Magazine found that 54 percent of Americans have a favorable impression of the protests, while just 23 percent have a negative impression. An NBC/Wall Street Journal survey, meanwhile, found that 37 percent of respondents "tend to support" the movement, while only 18 percent "tend to oppose" it.

The findings suggest that the right's portrait of the movement as a collection of lazy hippies who need to stop whining - to "take a shower and get a job" (Bill O'Reilly) - isn't resonating with most Americans.

That's because while the protesters' aims are vague - Bill Clinton said Wednesday that they need to start advocating specific political goals - their frustrations are easily identifiable and widely shared. The Occupy movement may be a big tent (one with room for opposition to fracking, calls for campaign finance reform, and a host of other positions), but nearly everyone involved says they are angry that a small group of wealthy Americans have grown increasingly rich while "the other 99 percent" have been left behind.

That's a belief that seems to be shared by Americans across the political spectrum. In 2010, as CBSNews.com reported in astory on the income and wealth divide last month, researchers and Harvard and Duke asked Americans how they thought wealth is spread among income groups, as well as how they thought it should be spread. Overwhelmingly, Americans said they wanted a more equitable distribution of wealth; they also underestimated just how large the wealth divide has grown. (See chart below.)

As the study's authors noted, "All groups - even the wealthiest respondents - desired a more equal distribution of wealth than what they estimated the current United States level to be." Republicans, Democrats, independents, as well as rich, middle class and poor all said that wealth shouldn't be so concentrated among the highest earners.

That goes a long way toward explaining the Occupy movement's potential staying power and cultural resonance. While most Americans wouldn't camp out in the freewheeling quasi-society that has sprung up in Lower Manhattan, the vast majority seem to share the protesters' sense that the economic deck is stacked. They've seen the government bail out the banks that helped create the economic crisis, seen corporate profits hit all-time high after all-time high, seen CEO pay balloon to 350 times that of the average worker. They've seen average hourly earnings (adjusted for inflation) stagnate for half a century while CEO pay increased 300 percent since 1990. They've seen social mobility decline and friends and neighbors join the ranks of the long-term unemployed while the wealthiest Americans have had their tax burden reduced and have increased their share of the nation's wealth. (For the details behind these statistics, see the extraordinary valuable graphics put together by Business Insider.)

There's no denying that some of the protesters fit critics' characterization of them - many, though certainly not all, of the most committed demonstrators are the sort of outspoken young leftists that O'Reilly seems to disdain. And there's no question there is a wide variety of opinions about how to move forward - both within the movement and the public at large. But the polls and the data suggest that the protesters' underlying concerns resonate widely. Occupy Wall Street may have an uncertain future - demonstrators in New York may be de facto evicted Friday morning - but it clearly seems to have tapped into a widespread sense that the economic system is out of whack. And that makes it far more difficult for critics to blithely dismiss the protesters as outside the American mainstream.