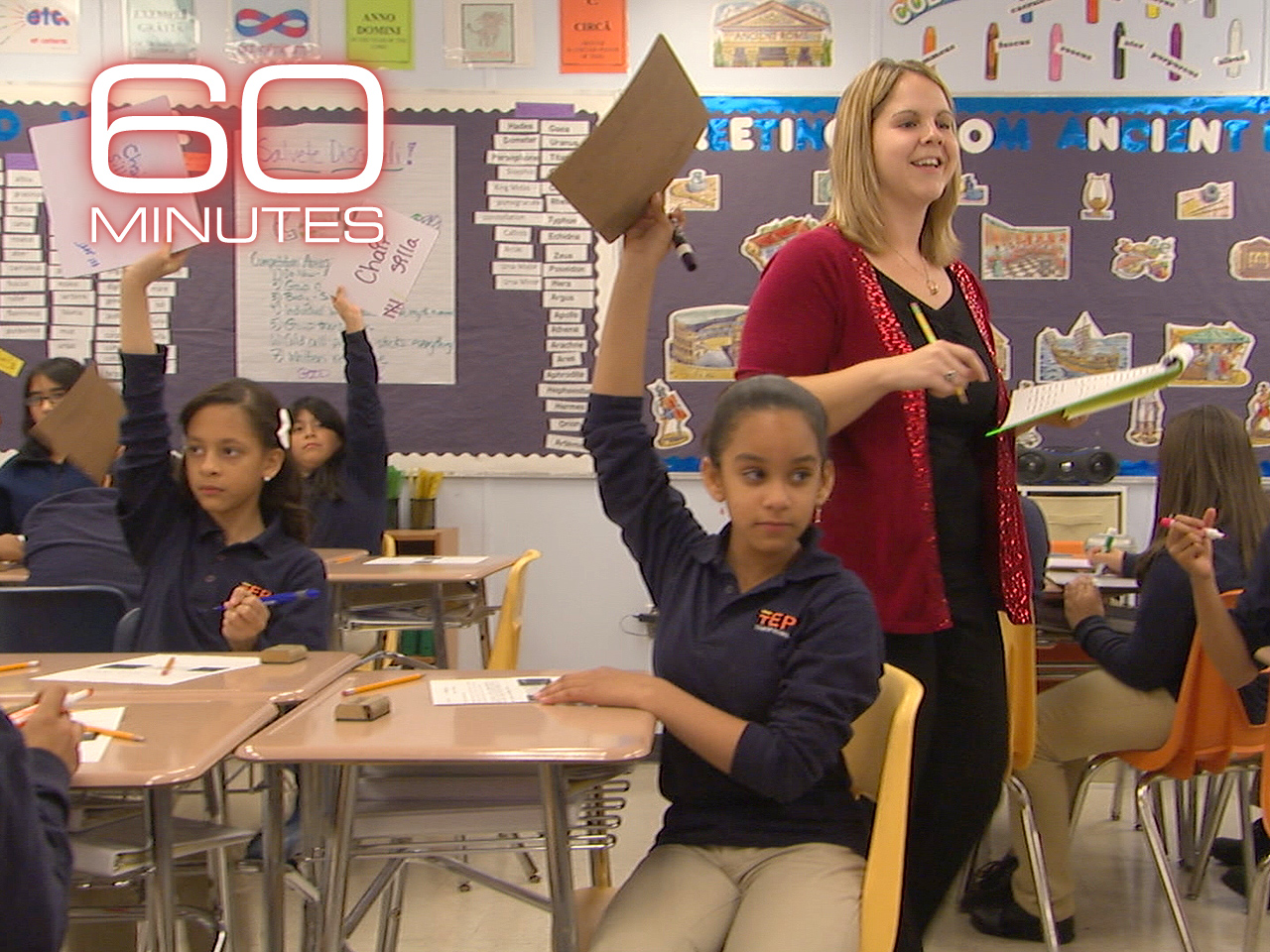 With state after state confronting massive budget problems, several governors have been looking to extract whatever they can from public employees like teachers, going after benefits packages and guaranteed job security that unions have won for them. But would teachers be willing to give up those protections for a chance to earn a lot more money?

There's a school in New York City that's trying to prove just that. It's a bold new experiment in public education called "TEP," which stands for The Equity Project, a charter school that is publicly funded but privately run. It's offering its teachers $125,000 a year - more than double the national average.

TEP aims to prove that attracting the best and brightest teachers and holding them accountable for results is the essential ingredient to a school's success. Could this school become a national model for the future of public education? That's the $125,000 question.

"You pay your teachers $125,000 a year, which is a lot of money for a teacher in this country. Why?" Katie Couric asked Zeke Vanderhoek, the school's founder and principal.

"Because they're worth it, because teachers are the key, and if we can pay them this with the existing dollars, why aren't we doing it?" he replied.

They're doing it at TEP because Vanderhoek, 34, a former teacher, gets to decide who he hires and how much he pays them.

Asked how he thinks these high salaries will impact student achievement, Vanderhoek told Couric, "I don't think paying people more makes them a better teacher. You take a mediocre teacher, you double their salary, nothing's gonna change. So, if you wanna attract and retain talent, you have to pay for it. "

"And that is ultimately how student achievement will be impacted," he added.

"60 Minutes" has been following the school since it opened its doors a year and a half ago in Washington Heights, a poor, mostly Hispanic neighborhood in upper Manhattan.

There are currently 247 fifth and sixth graders and 15 teachers; classes will eventually run through the eighth grade.

Asked how TEP teachers differ from teachers in other public schools, Vanderhoek said, "They're not. There are great teachers in almost every public school in the city. The difference is that they are often the exception, not the rule. So what we're trying to do is build a school where every teacher is a great teacher."

To find those teachers, Vanderhoek launched a nationwide talent search that's been called the "American Idol" of education. Thousands of applicants have sent in resumes and those who make it to the final round have to spend a day trying out in front of a very tough crowd.

"The first class of teachers, what qualities were you looking for?" Couric asked.

"Their ability to produce some evidence that the students in their classrooms move from point A to point B," Vanderhoek explained. "In order for students to demonstrate that growth, they have to be into it. And so the teacher has to be able to engage students."

The chosen include Joe Carbone, a former NBA trainer, Rhena Jasey, a Harvard grad who's been teaching for eight years, and Gina Galassi, an accomplished violist who teaches music.

"When you first saw the ad that said the starting salary would be $125,000, what did you think?" Couric asked Galassi.

"I thought too good to be true. I said 'This is like some wacko cult' or something. It didn't make sense, you know. What was the catch?" she replied.

Produced by Jenny DubinThe catch is that with those higher salaries come higher expectations, and unlike most schools, those who don't meet Vanderhoek's standards will be shown the door.

LeFevre is a 30-year classroom veteran who was making $40,000 a year when she moved from Tucson to take a job at the school. "I think we all have a lot of trust in terms of how we feel about Zeke and if he really felt he needed to make a change, it would be in the best interest of the students here," she said.

The students are mostly African American and Hispanic, and almost all of them come from poor families.

More than two thirds of the kids are reading below grade level when they get to TEP, like Christian Pena. He had been in the New York City school system for four years but still couldn't read or write when he began fifth grade at TEP.

The school's challenge is one that has bedeviled American educators for decades: how to get poor, minority, inner city kids to achieve at the same levels as kids from more affluent neighborhoods.

"What makes you think you can narrow the achievement gap with this school?" Couric asked Vanderhoek.

"The difference between a great teacher and a mediocre or poor teacher is several grade levels of achievement in a given year," he replied. "A school that focuses all of its energy and its resources on fantastic teaching can bridge the achievement gap."

Asked if he can implement a school like TEP on a larger scale, Vanderhoek said, "Absolutely. We do not take any outside money to support our teachers' salaries."

The school survives on public funding alone, and Vanderhoek is able to pay his teachers well by reallocating resources. There are no state-of-the-art facilities - classes take place in trailers. And the money that would go to pay for an assistant principal, reading specialist and other staff goes into teachers' salaries. But that means the teachers have to do those jobs as well.

"You're doing a lot more than teaching here. So do you ever feel like, 'Well, gosh, I'm making a lot of money, but jeez, I'm doing a lot of jobs here'?" Couric asked Casey Ash, who teaches social studies.

"That's what we signed up for," Ash replied.

They also signed up to be continuously evaluated by Vanderhoek and each other. Even after the last bell, they're still at it, analyzing teaching videos like coaches reviewing game tapes.

Skills like classroom management, getting kids settled in and ready to learn are key.

"The greatest benefit of working here is that it's not okay to just be okay. And every lesson does need to be laser focused and super sharp so that you can get the best outcomes from it," Ash explained.

"It's been very humbling for me. Because it's highlighted certain gaps that I had in my teaching along the way," LeFevre said.

"So, I had to go through a period of mourning over the teacher that I would have been if I'd gotten this kind of feedback, you know, 25 years ago," she explained.

Turns out she wasn't alone: "At the beginning of the year I felt like I was the worst teacher," Heather Wardwell told Couric.

Before she came to TEP, Wardwell spent most of the last 16 years teaching high school Latin. "I wasn't prepared for the fifth grade behavior and the fifth grade mentality. I didn't feel like I was getting through to the kids and that they were learning," she said.

But when we sat down with a group of students, they gave us their own take on TEP.

The kids told Couric they like school but that this hadn't always been the case.

"How are the teachers different here from your old school?" Couric asked.

"They actually care if we succeed and pass college," a student replied.

"In my old school, I didn't really get that much attention and help with my class work, so I didn't do as well. Here, I'm getting As and Bs because the teachers stay on top of you and they actually help you when you need help," another said.

"What do you think makes a good teacher, Gina?" Couric asked Galassi.

"You just have to believe in the kids. And I know that they can learn. And if there's a roadblock, if they're not getting it you know, look at me first," she replied.

"You never give up," Couric remarked.

Most charter schools like TEP are not unionized and don't offer teachers tenure.

"The idea that somebody could have a job for life no matter how they perform is not good for people in that job, much less for the students who have to suffer if that individual has gone downhill," Vanderhook said.

Asked if he thinks tenure should be abolished in general, Vanderhoek said, "Yes."

"How difficult is it for a teacher to get tenure?" Couric asked Joel Klein, who stepped down in January after eight years as the New York City schools chancellor.

"If you have a pulse, you get tenure," Klein said.

"You just have to show up?" Couric asked.

"Tenure's something you get for showing up," Klein said.

He says that traditional public schools can't follow the TEP model. Vanderhoek is able to make personnel decisions based on performance, but most schools can't because of tenure.

"It's virtually impossible to terminate an incompetent teacher. The process is so cumbersome that very few people will try. And so, as a result, we virtually get rid of no one for poor performance in the city," Klein said.

And the unions have fought tooth and nail to keep teachers from losing their jobs, even when they have unsatisfactory ratings. They believe that tenure protects the rights of teachers and prevents them from being unjustly fired by vindictive principals.

At TEP, Vanderhoek fired two teachers at the end of the first year.

"What criteria do you use when you are deciding whether or not to retain a teacher?" Couric asked.

"Is the classroom managed in a way that supports instruction? Second, are the kids engaged? Are they on task? And third, is there evidence that students started at point A and grew to point B?" he explained.

After a rigorous evaluation process, both Judy LeFevre, the 30-year veteran from Arizona, and Heather Wardwell were let go.

Wardell told Couric she felt "relieved" when she got that news. "Because I had been telling him for a while that I was struggling with balancing my life."

Wardwell said she was putting in 80 to 90 hours a week at TEP, twice as much as her old job.

"I had to say no to my children often, 'No, I can't play.' I'd stopped making dinner," she explained.

"It was for me," Wardwell said. "But if you love teaching and you want to be in the Olympics of teaching, this would be the place to do it."

"These people at The Equity Project are demanding on the front end as to whom they hire, and even after all of that, they're still prepared after the first year to say to two teachers, 'This is not the right place for you.' That's a very different model from the public school system," Joel Klein said.

But is the model working? When the fifth graders took the New York State math and reading exams, the results were disappointing. On average, other schools in the district scored better than TEP.

"Some people watching this might be thinking, 'Hey, they're paying teachers $125,000 a year. They've attracted the best and the brightest. These results don't really add up,'" Couric pointed out.

"We don't have a magic wand. We're not gonna take kids who are scoring below grade level and bring them up in a year," Vanderhoek said.

"You're the head of the school, the principal. Why do you get to keep your job?" Couric asked.

"Ultimately to build an excellent organization is going to take time. And if that doesn't happen let's say four years from now, then I shouldn't keep my job," Vanderhoek said.

But there are signs that things are moving in the right direction.

Remember Christian Pena who couldn't read when he got to TEP? He jumped two grade levels in reading in just one year.

The war in Ukraine's effect on the world's food supply