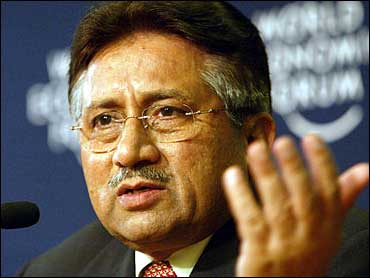 The father of Pakistan's nuclear program told investigators he gave nuclear weapons technology to other countries with the full knowledge of top army officials, including now-President Gen. Pervez Musharraf, a friend of the scientist said Tuesday.

Qazi Hussain Ahmed, head of Jamaat-e-Islami, said Khan told him he would eventually go public with his story but that he felt his "case is in the court of God Almighty," party spokesman Ameer ul-Azeem said. The party has strongly backed Khan and other detained scientists and called for a day of national protest Friday.

A friend of Khan's told The Associated Press that the scientist told him he hadn't violated Pakistan's laws by giving "disused centrifuge machines" and other equipment to Iran, North Korea and other countries.

"Whatever I did, it was in the knowledge of the bosses," Khan's friend quoted him as saying last week. The friend said Khan told him that two former military chiefs — Gen. Mirza Aslam Beg and Gen. Jehangir Karamat — and even Musharraf were "aware of everything" he was doing.

"I am also convinced that (Khan) couldn't act unilaterally," the friend said on condition of anonymity.

Military spokesman Maj. Gen. Shaukat Sultan denied Musharraf was privy to any transfer of nuclear technology or had authorized Khan to do it.

"It is absolutely wrong," Sultan said. Musharraf "was not involved in any such matter," he said. "No such thing has happened since he seized power in 1999."

Musharraf has headed the army since 1998, and before that held a number of top positions in the military.

Khan, who gave Pakistan the Islamic world's first nuclear bomb, was removed Sunday from his post as scientific adviser to the prime minister after he allegedly confessed to investigators that he had leaked nuclear secrets to other countries.

Khan's alleged admission has shocked many in Pakistan, and raised questions about how Khan could have spread nuclear technology without the consent of the military — which has often ruled Pakistan since the country gained independence from Britain in 1947.

The two retired army chiefs, Karamat and Beg, have told investigators they didn't authorize nuclear transfers. Musharraf and other government officials have repeatedly ruled out official involvement in proliferation.

"In some cases, chartered planes were used to smuggle out centrifuge machines and other sophisticated equipment to these countries," a senior government official told The AP.

The official, who spoke on condition of anonymity, said two "individuals" from Sri Lanka and Germany operated on behalf of Khan, working from the 1980s until at least 1997.

Pakistan began its probe into allegations of nuclear proliferation in November after Iran and Libya gave information to the U.N. nuclear watchdog.

So far, investigators have questioned two former heads of the army, scientists, engineers and security officials to determine whether they knew about the leak of nuclear technology to other countries.

Authorities are focusing on seven suspects — three scientists including Khan and four former security officials at Khan Research Laboratories, or KRL, a nuclear weapons facility named after Khan. On Tuesday, authorities said four of those detained would be held another three months, despite relatives' pleas for their release.

But two intelligence officials said Tuesday that money was a motivation.

"Definitely money was involved in this game," a senior intelligence official involved in the probe said on condition of anonymity.

"For us, it was shocking that KRL's equipment was moved out of Pakistan, and we knew nothing," another official said on condition of anonymity. "It was a misuse of authority, a breach of confidence and nothing else."

He said Khan "gave access to scientists and engineers from Iran and North Korea to our nuclear facilities" and also had met them outside the lab.

A close aide to Khan — Mohammed Farooq, who has been detained in the probe — was sent to Iran to help their scientists and also was a key figure in the international nuclear black market, the official said.