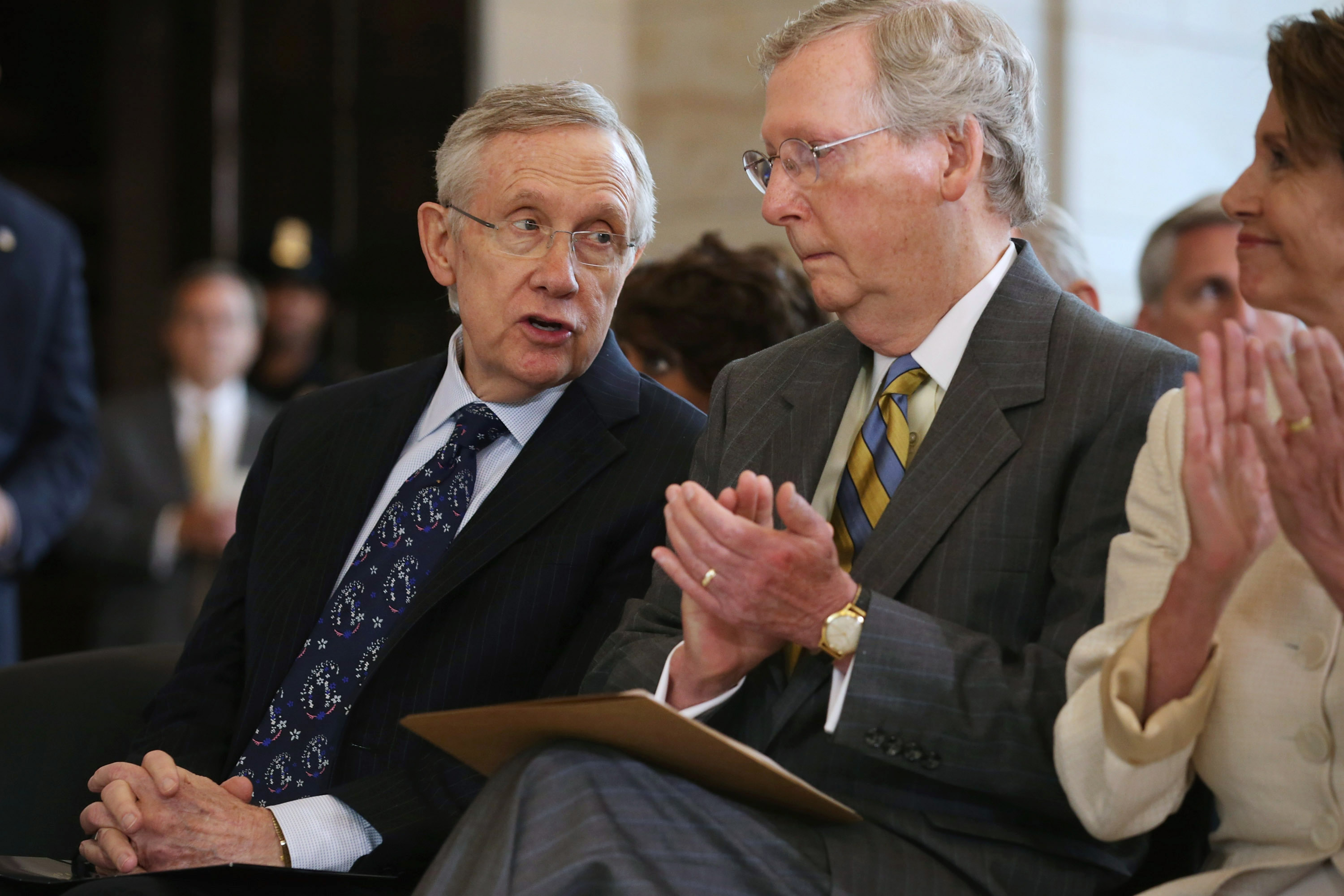 When President Trump announces his replacement for retiring Supreme Court Justice Anthony Kennedy on Friday night, his nominee will only need 51 votes in the U.S. Senate to be confirmed.

But for the vast majority of American history, nominees for nation's highest court effectively needed at least 60 votes, which often required some bipartisan support for the president's pick. Otherwise, a filibuster could hold up a nomination indefinitely.

But this arrangement had always been profoundly irritating to the party in power, particularly given the political polarization of recent decades. Time and time again, the party in control of the Senate and White House saw their selections for powerful positions filibustered by their opponents in the minority.

Under President George W. Bush, however, Republicans began toying with a way to get around the filibuster: a simple change to the Senate rules, which required just 51 votes, that would allow judicial nominees to pass with a simple majority.

In 2003, the GOP controlled the White House and had the same 51-vote majority in the Senate they have today. But Democrats had begun filibustering a number of Bush's judicial nominees, which Republicans saw as an affront to their agenda.

So Senate Republicans began toying around with an idea they called "the Hulk," a secret plan to remove the 60-vote threshold via a rule change. But it was the former Republican leader, Mississippi Sen. Trent Lott, who reportedly gave it the name that stuck:"the nuclear option."

Did they use the nuclear option?

No. Republicans increased their Senate majority in the 2004 elections and the nuclear option was largely taken off the table. However, in 2013, Democrats were in charge of the Senate and White House, and it was the minority Republicans who were filibustering their judicial picks en masse.

So the Democratic Senate Majority Leader, Nevada's Harry Reid, decided to pull the trigger. The nuclear option was implemented for the first time, and the Senate rules were changed so nominees for cabinet posts and federal judgeships could be confirmed with just 51 votes. Republicans cried foul, despite threatening the nuclear option in the past, and Democrats who had been opposed to such a rule change quickly changed their tune. Then-Senate Minority Leader Mitch McConnell said at the time, "You'll regret this, and you may regret this a lot sooner than you think."

But did that apply to Supreme Court nominees?

It did not – Reid did not change the rules for the Supreme Court, meaning nominees still effectively needed to meet the 60-vote threshold to avoid a filibuster.

But then the Senate and White House changed hands again. Republicans took the Senate in the 2014 elections and refused to consider President Obama's pick for the Supreme Court vacancy created by the death of Justice Antonin Scalia. GOP Senate Majority Leader Mitch McConnell instead waited for the 2016 election, hoping a Republican would be elected president and nominate Scalia's successor.

McConnell's move was criticized as an unprecedented breach of political norms, but he got his wish when Mr. Trump was elected. Mr. Trump nominated Judge Neil Gorsuch to fill the seat in 2017, but with the GOP possessing only a narrow majority in the Senate, McConnell and his Republicans reached for the nuclear option.

Once again, the parties flipped sides on whether the nuclear option was justified. New York Sen. Chuck Schumer, the Democratic leader, said he regretted that Reid had used the nuclear option in 2013, even though he had backed the move at the time. McConnell, an outspoken opponent of using the nuclear option when he was in the minority, now justified its use by citing what Reid did as precedent.

The Senate rules were changed for Supreme Court nominees, allowing them to be confirmed by a simple majority. The conservative Gorsuch was confirmed days later to the Senate in a 54-to-45 vote.

What does that mean for Trump's new pick for the Supreme Court?

Even though Mr. Trump's new nominee won't have to get 60 votes because of the nuclear option, getting to 51 might still be a struggle. Most -- though not all -- Democrats appear dead set against confirming anyone Mr. Trump nominates, and Republicans only have 51 votes there to begin with.

This means that Republicans will likely have to stay united in supporting Mr. Trump's pick, which could get complicated if moderate GOP Sens. Lisa Murkowski and Susan Collins feel the nominee is too conservative, particularly on abortion rights.

There are three Democrats who voted for Gorsuch -- Sens. Joe Manchin of West Virginia, Heidi Heitkamp of North Dakota and Joe Donnelly of Indiana. They're all up for re-election in 2018 in states that voted strongly for Donald Trump in 2016, and it's not clear yet how they'll vote for the president's second Supreme Court nominee, especially given that this next justice, unlike Gorsuch, will change the balance of the court.

So while the nuclear option has made life easier for Mr. Trump and the GOP when it comes to getting a Supreme Court pick, it doesn't mean that the president's nominee is necessarily a slam-dunk for confirmation.