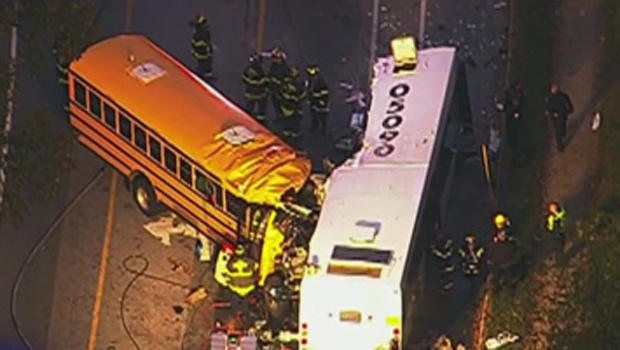 BALTIMORE -- The driver of a Baltimore school bus that careened into a transit bus, killing six people, including himself, was speeding, had a history of previous crashes and had a seizure the week before, national investigators said Wednesday.

Glen Chappell was driving about 57 mph in a 30-mph zone - nearly twice the speed limit - when he struck a Ford Mustang from behind before colliding with an oncoming Maryland Transit Administration bus last month, according to the National Transportation Safety Board’s initial report.

Chappell was driving the school bus for AAAfordable LLC of Baltimore, which held a contract with Baltimore City Public Schools. No children were on board at the time of the crash.

Incident reports referencing Chappell’s previous crashes and other problematic issues said Chappell had “seizure-like episodes,” and had a seizure just a week before the Nov. 1 crash.

In addition, while Chappell had a medical certificate allowing him to drive the school bus, he had not filed it with the Maryland Vehicle Administration, which made it illegal for him to be driving the bus, the report said.

Chappell’s wife told investigators after an earlier crash that he had been taking medication for seizures when he got into an accident two years ago.

Chappell had been driving buses since 2008. He began working for AAAfordable in 2014, but took a break between April and August of this year, during which time he drove for other bus companies.

Chappell was just a short distance from picking up his first kids for the school bus when the accident occured.

Police spokesman T.J. Smith said at the time of the crash that the damage was huge.

“It literally looks like a bomb exploded in the bus. It’s catastrophic damage,” Smith said.

Baltimore Police Commissioner Kevin Davis characterized riders on the No. 10 MTA bus as workers traveling on a route from Dundalk, a largely blue-collar community southeast of Baltimore, toward Catonsville, a western suburb.

The school bus first hit a silver Ford Mustang, crushing its rear and forcing its nose into the pavement. Then it hit a pillar at a cemetery entrance hundreds of feet down the street. Veering across the center line, the yellow school bus slammed into the front driver side of the MTA bus, ending about 100 yards from the pillar.

The school bus raked the side of the commuter bus, ending with its front end buried toward the back of the MTA vehicle.