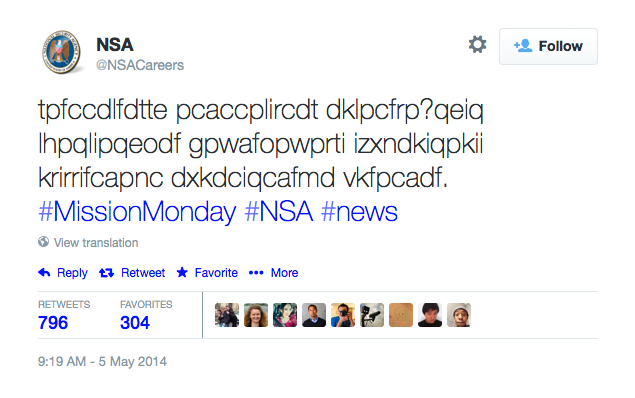 A Twitter account run by the NSA's recruitment office sent out a coded tweet on Monday with the hashtag #MissionMonday, sending the Internet abuzz with speculation over what the message meant.

Twitter user @DanielShealey says he deciphered the message, which reads: "Want to know what it takes to work at NSA? Check back each month to explore careers essential to protect in your nation."

This isn't the first coded message tweeted out by the recruitment office. In February, a similar coded tweet was posted in honor of Presidents Day. According to the Washington Post, the tweet uses a substitution cipher that swaps letters of the alphabet with another.

A spokesperson for the NSA told CBS News via email that the Twitter feed is focused on career opportunities at the agency, and released this statement:

NSA is known as the code makers and code breakers. As part of our recruitment efforts to attract the best and the brightest, we will post mission related coded tweets on Mondays in the month of May. Today's Tweet announces this effort - Every Monday in May, we'll explore careers essential to protecting our nation. #NSA #news #MissionMonday

Code-breaking mysteries aren't new to the Internet. One of the most bizarre unsolved mysteries on the Web, Cicada 3301, involves ciphers, cryptography and number theory.