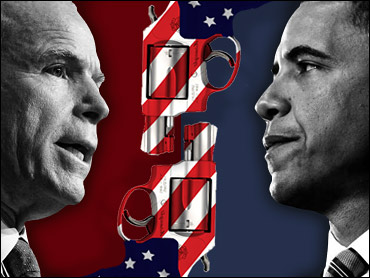 After claiming that Obama supports "a huge new tax on my guns and ammo," Rusch closes the door of his truck and turns directly to the camera.

"Where is this guy from?" he asks. "He's probably never been hunting a day in his life."

The spot, the Washington Post points out, is a "huge stretch" - the claim that Obama wants to institute a large tax on guns and ammo, for instance, rests on a few words in an essentially irrelevant and vaguely-worded newspaper article from nine years ago.

But the point is clear: If you're a hunter, Barack Obama is not anything like you. And if he doesn't understand your concerns, he sure doesn't deserve your vote.

Obama has been fighting the notion that he opposes gun rights, stressing on the stump that he backs Second Amendment protections. His campaign has released a radio ad featuring American Hunters and Shooters Association head Ray Schoenke telling hunters the Democratic nominee won't come for their guns.

"The bottom line is this. If you've got a rifle, you've got a shotgun, you've got a gun in your house, I'm not taking it away," Obama said earlier this month in Pennsylvania. "Alright? So they can keep on talking about it, but this is just not true."

(Obama also said at the time that even if he wanted to take hunters' guns away, he "couldn't get it done" since he doesn't "have the votes in Congress" - a statement that did not exactly put sportsmen's fears to rest.)

Obama's running mate Joe Biden, meanwhile, suggested recently that Republicans will use the issue to scare voters away from the Obama-Biden ticket.

The NRA's political arm has been going after the Democratic nominee hard: In addition to an advertising blitz that includes four new television spots running on national cable and in New Mexico, Colorado, and Pennsylvania, as well as radio and print ads, the organization is suggesting that Obama would be "the most anti-gun president in American history." It has sent mailers and emails to members hammering the Illinois senator, including one from NRA President Wayne LaPierre suggesting that Obama has a "deep-rooted hatred of firearm freedoms." Earlier this week, there was a minor dustup when West Virginia union leaders said an NRA film crew tried to coerce miners into badmouthing the Democratic nominee on camera.

"Barack Obama has throughout his entire career embraced the radical agenda of extremist gun control groups," NRA chief lobbyist Chris W. Cox said. "He's going all over the country trying to mislead gun owners and sportsman that he is some sort of friend. It's shameless. We're going to arm gun owners with the facts so they can make an informed decision on Election Day."

The Democratic presidential nominee has voted to leave gun makers and dealers open to lawsuits, and as a state lawmaker he supported tighter restrictions on firearms and a ban on semiautomatic weapons.

"Obama has the audacity of claiming to support the second amendment," Cox said. "This is a politician who has shown nothing but disdain and mistrust of law abiding gun owners in America."

Largely absent from the NRA's rhetoric has been much mention of Obama's rival, GOP presidential nominee John McCain. Though NRA officials made conciliatory statements concerning McCain after he secured the GOP nomination, the Arizona senator has not always been a favorite of the gun lobby: He earned a C+ from the NRA in 2004 after backing legislation to close the so-called "gun show loophole," legislation that this 2003 NRA document claimed "is about eliminating gun shows." McCain is also the co-author of the McCain-Feingold campaign finance legislation that the NRA saw as an unfair restriction on its free speech.

"We've had disagreements with Senator McCain, those disagreements are well known, but it would be foolish to disregard over 20 years of high profile agreements," Cox said. McCain opposed an assault weapons ban and favored shielding gun makers and dealers from lawsuits, and his addition of lifetime NRA member and hunter Sarah Palin to the GOP ticket was widely lauded by gun advocates.

The NRA, which claims roughly 4 million members, plans to spend $40 million on election related advertising, a large chunk of it devoted to tearing down the Democratic nominee. But the organization has not yet endorsed a candidate. In the October issues of its three magazines, the NRA plans to include a political preference chart which details the candidates' positions and encouraging members to support the candidate whose positions best matches their values.

Gun issues have largely remained low profile for much of the campaign, except during a short period in June following a Supreme Court's decision to toss out the D.C. gun ban. At the time, McCain unequivocally applauded the measure and signed an amicus brief supporting it; Obama said that while he supports the Second Amendment, "I also identify with the need for crime-ravaged communities to save their children from the violence that plagues our streets through common-sense, effective safety measures."

McCain also took an opportunity in the wake of the decision to take a shot at Obama's infamous comment that small town voters frustrated by economic stasis "get bitter, they cling to guns or religion or antipathy to people who aren't like them or anti-immigrant sentiment or anti-trade sentiment as a way to explain their frustrations." The comment is referenced in Rusch's NRA advertisement.

"Unlike the elitist view that believes Americans cling to guns out of bitterness, today's ruling recognizes that gun ownership is a fundamental right -- sacred, just as the right to free speech and assembly," McCain said.

According to Democratic political consultant Dave "Mudcat" Saunders, a former John Edwards advisor who is known for pushing Democrats to take rural voters' concerns more seriously, it is McCain, not Obama, whom gun owners should fear. Saunders argues that while Obama has essentially vowed to leave the gun owners alone, McCain has stood by his position on gun shows.

"One of Obama's young volunteers called me up and asked me what he could do to help," Saunders, who casts himself as more pro-gun than the NRA, told CBSNews.com. "I told him to go down to the Hillsville (Virginia) gun show with some fliers with [McCain's] picture on them that said, 'if you elect this guy John McCain president, don't plan on coming back next year.'"

McCain told Field And Stream that his position in favor of closing the gun show loophole is the issue most likely to cause friction between himself and sportsmen.

"I think that gun shows are marvelous, and we now have the capability for instant background checks," he said.

Dennis Fusaro, a Republican and pro-gun activist in Virginia who served for a time as Ron Paul's national field director, said he would not be voting for either Obama or McCain. A lifetime member of the NRA, Fusaro was director of state legislation for the Gun Owners of America, a hardcore gun-rights group that describes itself as "no compromise."

"On paper, Obama appears worse than McCain," he said. But McCain is more dangerous, he argued, because he is more likely to successfully enact legislation that would result in fewer rights for gun owners. Obama, Fusaro believes, simply won't make the issue a priority.

Saunders said Obama should continue to stress that he backs Second Amendment rights. He argued that McCain's ten-point lead among rural voters in 13 key states would be higher if the GOP nominee had more credibility when it comes to gun issues.

"The single issue voters on guns are not the anti-gun people, it's the pro-gun people," he argued.

But Fusaro said it was unlikely that many pro-gun voters would support Obama in November.

"There are people who are looking at Barack Obama and are scared," he said. "They may just say, 'I can live with John McCain.'"
By Brian Montopoli