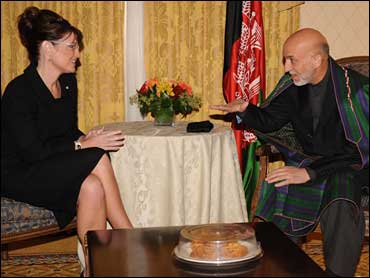 It was a tightly controlled crash course on foreign policy for the Republican vice presidential candidate, the mayor-turned-governor who has been outside North America just once.

Palin sat down with Afghan President Hamid Karzai and Colombian President Alvaro Uribe. The conversation was private, the pictures public, meant to pad her resume for voters concerned about her lack of experience in world affairs.

It was shuttle diplomacy, New York-style. At several points, Palin's motorcade got stuck in traffic and New Yorkers, unimpressed with the flashing lights, sirens and police officers in her group, simply walked between the vehicles to get across the street. Secretary of State Condoleezza Rice, three hours behind Palin in seeing Karzai, found herself overshadowed for a day as she made her own rounds.

John McCain's presidential campaign has shielded the first-term Alaska governor for weeks from spontaneous questions from voters and reporters, and went to striking lengths Tuesday to maintain that distance as Palin made her diplomatic debut.

The GOP campaign, applying more restrictive rules on access than even President Bush uses in the White House, banned reporters from the start of the meetings, so as not to risk a question being asked of Palin.

McCain aides relented after news organizations objected and CNN, which was supplying TV footage to a variety of networks, decided to pull its TV crew from Palin's meeting with Karzai.

Palin is studying foreign policy ahead of her one debate with Democratic vice presidential candidate Joe Biden, a senator with deep credentials on that front. More broadly, the Republican ticket is trying to counter questions exploited by Democrats about her qualifications to serve as vice president and step into the presidency at a moment's notice if necessary.

There was no chance of putting such questions to rest with photo opportunities Tuesday.

But Palin, who got a passport only last year, no longer has to own up to a blank slate when asked about heads of state she has met.

She also got her first intelligence briefing Tuesday, over two hours.

Randy Scheunemann, a longtime McCain aide on foreign policy, was close at hand during the sessions. Another adviser, Stephen Biegun, also accompanied her at each meeting and briefed reporters later in the day.

Karzai and Palin discussed some of the security challenges that still remain in Afghanistan, including cross-border insurgencies. They also talked about the need for more U.S. troops there, which both McCain and Democrat Barack Obama say is necessary, Biegun said.

With both Karzai and Uribe, Palin discussed the importance of energy security. With Uribe, the conversation also touched on the proposed U.S.-Colombian Free Trade Agreement that McCain and Palin support but Obama opposes.

Her meeting with Kissinger, which lasted more than an hour, covered a range of national security and foreign policy issues, specifically Russia, Iran and China, Biegun said.

"Gov. Palin, in these meetings, is cognizant that she is a candidate for office, that she's not, that there is a president of the United States and she is in the middle of a campaign for president of the United States," Biegun said. "So rather than make specific policy prescriptions, she was largely listening, having an exchange of views and also very interested in forming a relationship with people she met with today."

Before Palin's first meeting of the day, with Karzai, campaign aides had told reporters in the press pool that followed her they could not go into meetings where photographers and a video camera crew would be let in for pictures.

Mr. Bush and members of Congress routinely allow reporters to attend photo opportunities along with photographers, and the reporters sometimes are able to ask questions at the beginning of private meetings before they are ushered out.

At least two news organizations, including AP, objected to the exclusion of reporters and were told that the decision to have a "photo spray" only was not subject to discussion. After aides backed away from that, campaign spokeswoman Tracey Schmitt said the reporter ban was a "miscommunication."

Palin, 44, has been to neighboring Canada and to Mexico, and made a brief trip to Kuwait and Germany to see Alaska National Guard troops.