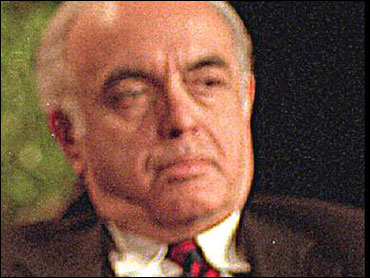 The serious news of the day — from Saddam Hussein's spider hole to Medicare to gay marriage — served as fodder for song, dance and silly dress-up Saturday night in the Gridiron dinner, a 119-year tradition of Washington journalism.

In the most unusual turn of this year's satirical script, syndicated columnist Robert Novak — who sparked a federal investigation by printing the name of an undercover CIA officer — was taking the stage as that CIA officer's disgruntled husband, former ambassador Joseph Wilson.

Dressed as Wilson in top hat and cutaway coat, Novak sings of himself: "Novak had a secret source ... so he outed a girl spy the way princes of darkness do. ... Now John Ashcroft asks Bob who and how, could be headed to the old hoosegow."

A federal grand jury is probing whether someone in the Bush administration leaked the CIA officer's identity, possibly a felony. Novak hasn't commented on the investigation — until the Gridiron, in song.

Founded in 1885, the invitation-only Gridiron Club exists solely for its annual white-tie dinner, attended by Cabinet secretaries, congressional leaders and the like. The show has been visited by every president since Benjamin Harrison, except one — Grover Cleveland.

Bush spoke at the first three Gridirons of his term, but skipped this year's show in favor of a summit at his Texas ranch with Mexican President Vicente Fox.

Gridiron President Al Hunt, a columnist for The Wall Street Journal, spun that into a pun about conservatives' fondness for Fox News Channel: "That pretty much sums up the White House philosophy: Why waste time with newspaper reporters when you can spend quality time with Fox?"

Clinton took a good-natured jab at Giuliani, a potential adversary in some yet-to-be determined political contest.

Alluding to the former New York City mayor's old comb-over and his new emphasize-the-bald hairstyles, she noted that "in Washington the cover-up is always worse than the truth."

She also claimed she had "heard Rudy has been asking if he can head the Republican vice presidential search committee."

Cheney, who headed the vice presidential search team that resulted in his own selection, picked up the theme later as he pretended to be responding to press questions submitted on index cards.

One purported question dealt with whether Cheney had any plans to step down from the GOP ticket in the fall.

"No, I don't," he said, "and Rudy you need to do a better job of disguising your handwriting."

The taciturn Cheney poked fun as his health problems, saying he had become a little alarmed earlier in the evening when he felt tightness in his chest, "then I realized it's called laughing."

Neither Clinton nor Giuliani did anything to quell speculation about their possible aspirations for the White House.

For those who insist on looking into the future, Clinton offered this: "Let me say to all of you, my name is Hillary Clinton and the state of our union is strong."

Giuliani, meanwhile, proclaimed: "It's silly to talk about elections in 2008. It's 2004." But as he spoke, a series of doctored photos appeared on a giant screen behind him showing Giuliani's head superimposed on figures in a number of White House settings, including one "President Giuliani" in the Oval Office and another walking down the stairway of Air Force One.

He did have a compliment, sort of, for Clinton, noting that "we're both lifelong Yankee fans." But he added that "she developed her loyalties in Chicago."

Accordingly, the humor relies heavily on outlandish costumes — Ralph Nader as a skunk at the Democrats' garden party; vegetarian presidential candidate Dennis Kucinich as a giant carrot; Bush adviser Karl Rove as Oz's Scarecrow, singing about his boss, "If he only had MY brain."

The voices of the club's 60 veteran reporters, editors and columnists are augmented by more polished singers brought in as "limited members."

A lesbian couple sings "Get us to the church on time." To the tune of "YMCA," a Sen. Edward Kennedy impersonator laments the passage of the GOP's Medicare bill: "We were done in by the A-A-R-P."

In one of many references to Iraq, Saddam Hussein pops out of his hiding place to sing not "Under the Boardwalk" but "Under the floormat, with all the fleas, yeah. But now a cot in a prison is where I'll be."

The show's ending, however, is a more somber tribute to U.S. troops abroad.