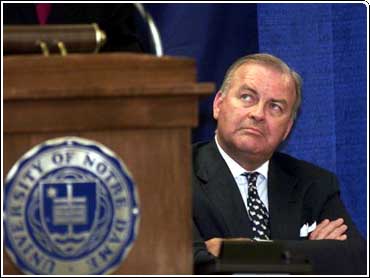 Notre Dame athletic director Mike Wadsworth will resign as part of a restructuring less than two months after Notre Dame's first major scrape with the NCAA over rules violations.

Wadsworth and Notre Dame president the Rev. Edward A. Malloy said in a statement Monday that Wadsworth would leave his post when his five-year contract ends this year. A specific date for his departure has not been set.

"I believe it's in both the university's and my best interests to end my tenure this year," Wadsworth said.

The NCAA in December put Notre Dame's storied football program on probation for the first time in the school's history and took away two scholarships. The penalties stem from the relationship between Irish players and former booster Kimberly Dunbar, who embezzled more than $1.2 million from her employer and then lavished the players with gifts, trips and money.

"I stated in December that the university's response to the recent problems in our football program had included a comprehensive external review of our athletic policies and procedures," Malloy said. "As a result of that review, I have decided to institute a substantial restructuring of administrative responsibilities in athletics.

"In light of this restructuring, Mike's five-year commitment, and the conclusion of the current five-year plan in athletics, he and I agree that now is the time for a fresh start for us both."

Wadsworth also has been criticized by some Notre Dame fans for engineering the resignation of popular football coach Lou Holtz in 1996, and replacing him with Bob Davie, who has compiled a 21-16 record over the past three seasons, including a 5-7 finish in 1999