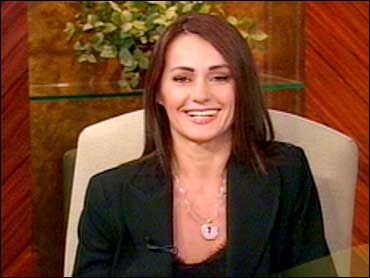 In July of 1976, man finally made it to Mars when the Viking spacecraft landed there. But the news that captured the covers of Time and Newsweek wasn't the red planet. It was a 14-year-old Romanian gymnast named Nadia Comaneci.

"I was 14. I think I was too young to understand about the impact I made at that time," Comaneci tells The Early Show co-anchor Harry Smith. "I didn't know there was no 10 score before in the history of the Olympics, so I had no idea."

She scored seven perfect 10s, and won three gold, one silver and one bronze medal.

Mars is back in the news this week and so is Comaneci. She's written her first book, "Letters to a Young Gymnast."

Page by page, she tells the story of her life, growing up in rural Romania.

"I grew up like any other child," she says. "I had a lot of energy and my mom saw that I broke the bed and said, 'This girl needs to go somewhere.' I was lucky that I had a gymnastics school in my town because if I had figure skating, I probably would have done figure skating. I was a motivated kid. I wanted to do something in my life. Today, I'm 42 and when I look back at what I've done, I'm just happy I chose that way and I accomplished something in my life."

Today, she encourages her students to do the same in her gymnastic school in Norman, Okla., where she lives with her husband, famous American gymnast Bart Connor.

Comaneci says, "Going back to my experience when I was 6 years old, I love to learn skills and I love to accomplish. I think you have to have the love for what you want to do in your life. Take little steps. Of course, everybody dreams about the Olympic games. That probably will happen, but don't get involved just because you want to go there."

Read an excerpt from "Letters to a Young Gymnast:"

There are two gymnastic moves on the uneven bars named after me. The first is called the "Comaneci Salto." Salto is a general term for a somersault. To perform a Comaneci Salto, the gymnast begins in a support position on the high bar. She casts away from the bar and performs a straddled front somersault and regrasps the same bar.

Gymnastics skills are rated from the easiest move to the most difficult. An A move is the easiest, then there are B, C, D, E, and Super E moves. The Super E is the most difficult, and usually, only a few gymnasts in the world can perform one. The Comaneci Salto is rated an E move. Even now, many years after the 1976 Olympics, very few gymnasts attempt the Comaneci Salto because it is so difficult.

I have a recurring dream. In it, there are two young girls with long brown hair floating over my bed. They wear gauzy, white nightgowns that fall loosely around pale legs and delicately pointed bare feet. I lie on my back beneath the covers watching them hover. They are lovely creatures, and I am not afraid; I am mesmerized, and I long to join them because they are cloaked by soft light, graceful and pure. Their lips, pale rosebuds, curve into smiles; their brown eyes are wise; their delicate fingers cup together, holding a hidden promise.

And then the dream changes.

The girls hover closer, and their mouths open into cavernous, yawning black holes. Suddenly, all I can see is darkness. All I can hear is the roar of a vast ocean. I am cold; I am afraid; I am alone. I know that the blackness will swallow me whole, but my bones are leaden and I cannot move from my bed. I try to call out for help, but the scream catches in my throat. The terror tastes like salt and blood.

And then the dream shifts. I see tiny bursts of color flutter out of the darkness. The girls drift overhead; I am still shrouded by the void, but sapphire, ruby, and amber-colored butterflies with transparent wings dart at the edge of vision . . . first one, then two, then many more. They look like stained glass-delicate, fragile, and breathtaking. The black begins to recede.

Sometimes in my dream, fear paralyzes me, and I cannot reach for the girls' hands. The darkness grows again, and I am swallowed and wake gasping for air, my hair drenched with sweat, my heart skipping and racing and grasping. I feel lost then and lonely in my failure. I feel like a child, a teenager, a young woman who never had the opportunity to control her destiny and learned nothing from the years of frustration, confusion, and desolation. I see the ghostlike girls fade from my vision and their almond-shaped eyes fill with regret.

Sometimes, though, I take the girls' hands and gently open them; I let life slide through their fingers because there are moments when I have the courage to risk letting go of everything even though I understand the danger of doing so. Then my bedroom fills with butterflies and bursts of electric color, and the darkness recedes. I am wrapped in the knowledge that I cannot always choose dreams but that I can be lost and found, afraid yet brave, and make each moment my own.

Dear friend, in your letter you asked about my dreams, childhood, and early life as a gymnast. Perhaps you expected short and simple answers. Maybe you wanted to hear about my first perfect score of 10, gold medals, defection . . . I promise all that will come. But my life, like your own, is much more complex than a simple list of failures and accomplishments, and I will not cheat you of your answers despite some discomfort on my part in the telling.

I have come to realize that these letters are not only for you. There is a catharsis that comes from recalling the memories I had carefully packed away in the attic of my mind so that I could go on with my life unburdened by the remembering. You have asked me to shine a light into that dusty place, and I am finally ready to do so. Bear with me. Write me again, and take my hand when I falter because I cannot make this journey alone. I do not know you, but you will know me.

Do you know what they say about stories? That there are always three versions-yours, mine, and the truth. This is mine, and I hope that what I have seen and understood and what I choose to share during our correspondence is valuable for you. Everyone has a few secrets. I will tell you some of mine, but I will keep a few as well because they are either personal treasures or too painful to recall and because I worry about distressing the living or the relatives of the dead with tales that cannot be altered to protect friends and families.

You ask who I am. I was born in Romania on November 12, 1961, and named Nadia Elena Comaneci by my father, Gheorghe, and mother, Stefania. My name literally means "hope," but my grandparents always believed it should have meant "luck." When I made my loud entrance into the world, I had a rare and large birth defect-a sac of liquid on the top of my head that looked like an enormous blister. The Romanian doctors were stymied and told my mother that they weren't certain I would survive and that if I did, I'd have mental handicaps. The doctors stuck me with countless needles, but the problem remained.

Finally, my grandmother instructed my mother to take me to church on Sunday; before the priest entered, she was to carry me over the threshold three times. She did, and when she woke the next morning and took me from my cradle, the birth defect had disappeared. It was probably a coincidence, but that's her story and the first lucky thing that happened in my life.

The second lucky incident occurred a week after I left the hospital. My mother was staying at my grandparents' home so that they could help her take care of me. There was a big storm the first night, and the roof was covered with giant slabs of ice. The next day, while I slept in a tiny bed in the kitchen because it was warmest in there, my parents and grandparents repaired windows and leaks. Passing through the kitchen, my grandfather decided to pick me up. A second later, the roof collapsed onto the bed. I would have died if he hadn't been holding me at that moment. It was probably another coincidence, but I grew up Romanian and in the Orthodox Church-and we have a tradition of weaving stories into gifts from God.

My mother once told me that the first piece of meat I ever ate was part of a bird. She believes that is why I loved to be outside, climb trees, and jump from heights without getting hurt and why I was able to soar as a gymnast. She also believes that's why I did not break my neck or drown when I fell off a 5-meter-high bridge as a toddler. By that point, my brother, Adrian, had been born, and he was seated in a stroller while I walked by my mother's side over the bridge. Somehow, my foot got stuck in the wooden slats, and I flipped and fell over the edge and into thigh-deep water.

My mother panicked. She couldn't leave my brother on the top of the bridge and jump after me. First, my brother might have crawled out of the stroller and fallen, too. Second, my mother probably would have killed herself landing in the water, and that wouldn't have done either of us any good. So she raced over the bridge, and by the time she'd reached land, I was already out of the water and waiting for her. All I had were a few bruises. I did not cry. I rarely do.

Everything I feel remains inside, with rare exceptions. I internalize it all, but that's my personality-I don't like to play theater. My face is an impenetrable wall to the outside world. I am like a pond and can be a mirror for your emotions, dear friend, but I rarely allow my own to surface and form ripples on the water. Beneath my calm facade, there are sometimes storms, but I experience them alone and share what I've seen and learned later, in my own way.

As a child, I used to clench my teeth when I felt upset, angry, or frustrated, but I refused to give people the satisfaction of seeing me cry. I've heard my old coach, Bela Karolyi, say that I was the only young gymnast he could never break. Perhaps it has always been an ego thing with me. But it is not an act I put on like a piece of clothing; it is quite simply the way I am.

Excerpted from "Letters to a Young Gymnast" by Nadia Comaneci. Excerpted by permission of Basic Books. All rights reserved. No part of this excerpt may be reproduced or reprinted without permission in writing from the publisher