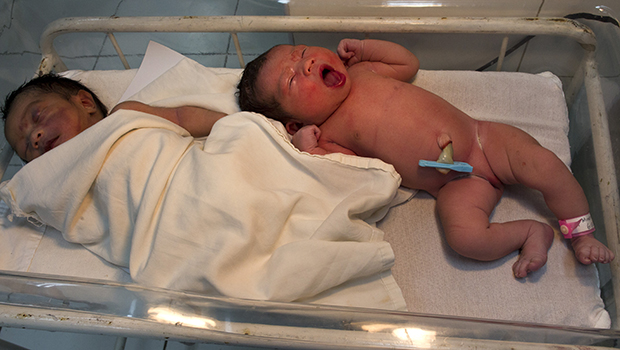 Don't cut that cord just yet: A research review finds keeping the umbilical cord of a newborn intact a little longer may lead to better health benefits for the baby.

The umbilical cord delivers oxygen and food from a mother's bloodstream, via the placenta, into the baby's blood to provide nutrients. Specifically, one vein in the cord carries blood along with the oxygen and nutrients from mom to baby, while two other arteries return deoxygenated blood and waste from baby to mom, according to Britain's National Health Service. Later in the pregnancy, the umbilical cord delivers disease-fighting antibodies that will boost the newborn's immunity in the months after birth.

Typically right after birth, a doctor or midwife may clamp the cord with two clips where it's then cut. Once cut, a stump remains that should dry and fall off by the time the baby is four weeks old, says the National Institutes of Health.

The new review comes from The Cochrane Library, a nonprofit collaboration of international researchers who review evidence that could guide policy decisions. They looked at 15 studies involving more than 3,900 women and their babies, looking at how clamping the cord less than one minute after birth compares to waiting one minute or longer after birth. The researchers wanted to see how each option affected both mom and baby's health.

The study was published July 11 by the Cochrane Pregnancy and Childbirth Group.

Clamping the cord immediately or later did not make a major difference for new moms, when it came to their risk of bleeding, blood loss or hemoglobin levels, a measure of healthy blood and iron levels.

For babies, however, the researchers did find some benefits to delaying cord clamping. Babies had higher hemoglobin levels in the days after birth -- suggesting healthier blood -- and were less likely to have an iron deficiency within six months after birth, the researchers found.

An iron deficiency in babies could soon lead to anemia, in which the body doesn't have enough healthy red blood cells, causing decreased appetite, fatigue, weakness, irritability and other symptoms. Later in life, iron deficiency anemia could affect attention span and school performance.

Babies who had clamping delayed after birth also were more likely to have a higher birth weight.

Low birth weight has been linked to increased risk for

"In light of growing evidence that delayed cord clamping increases early hemoglobin concentrations and iron stores in infants, a more liberal approach to delaying clamping of the umbilical cord in healthy babies appears to be warranted," study author Philippa Middleton, a researcher based at the Australian Research Center for Health of Women and Babies of the Robinson Institute at the University of Adelaide in Adelaide, Australia, said in a statement. "Later cord clamping to increase iron stores might be particularly beneficial in settings where severe anemia is common."

However, the study did find a slight risk increase for jaundice in babies who had delayed clamping.

A yellowing of the skin and eyes caused by the buildup of a blood byproduct, jaundice often appears in healthy babies within four days of birth, according to WebMD, and usually goes away within two weeks without complication. However, it could lead to brain complications like hearing loss, intellectual disability or behavioral problems in rare cases. It is often treated with fluorescent light therapy, and Middleton said the benefits of delayed cord clamping need to be weighted against this small added risk.

The World Health Organization currently recommends cord clamping between one and three minutes after birth to improve a baby's iron status.

"I suspect we'll have more and more delayed cord clamping," Dr. Jeffrey Ecker, the chair of committee on obstetrics practice for the American College of Obstetricians and Gynecologists (ACOG), told the New York Times. "It's a persuasive finding. It's tough not to think that delayed cord clamping, including better iron stores and more hemoglobin, is a good thing."

ACOG, however, has said in its policy there is insufficient evidence to confirm or refute the potential benefits from delayed clamping, the Times pointed out.

Did I get the polio vaccine? How to know if you're protected against the virus
Ryan Jaslow