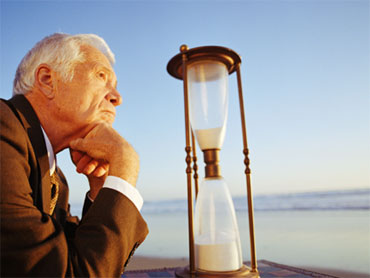 It's delicate, but potent.

In the television series "Mad-Men," advertising executive Don Draper knows all about the power of nostalgia: "it takes us to a place where we ache to go again.

Don Draper is TV make-believe, but his use of nostalgia to sell a product is as on-target as it gets, says real life advertising executive George Dewey of McCann Erickson.

"It's kind of shorthand to connect with people and instantly establish a rapport," Dewey tells CBS' "Sunday Morning", "Cause that's really all we're trying to do is to let people know that we understand you, and that our product fulfills the need, need you have."

An example; To help sell a product in the era of the internet, Dewey brought back animation from a TV Christmas special that first appeared in 1964.

Of course, advertising has long known the power of nostalgia: Consider the classic "Pepperidge Farm Remembers" campaign that ran in the 1970's and 80's

But you might be surprised to learn that nostalgia - which is all about the past - has a notorious past of its own. For centuries it was considered a disease and a form of depression. Soldiers even feared it as homesickness, and thought it could kill them.

But Lemoyne College psychology professor Krystine Batcho, who studies nostalgia, finds no signs of any deadly disease. In fact, quite the opposite.

"It helps remind you who you are in reference to other people," says Batcho, who sees one especially good use of nostalgia as a coping mechanism.

"You can't go back and do it again, but you can relive it in memory. And that's why I think nostalgia actually exists. To enable us to relive the good times."

Reliving good times can be a critical tool for surviving these bad times.

"If right now everything is terrible and bleak, if you're out of work and you can't pay your mortgage and you've been evicted and you think, 'there's nowhere for me to turn,' it is actually healthy to look to the past and to say, 'What else have I survived before?'" suggests Batcho.

It's like in the movie "A Christmas Carol"; The ghost reminds Scrooge of a time when he celebrated the holidays, a remembrance that he could again bring back into his life.

But in "It's a Wonderful Life"…George Bailey learns another of the lessons of nostalgia when he sees what Bedford Falls would be had he never lived.

"Get me back to my wife and kids!" laments the character, "I want to live again!"

It's called the George Bailey effect; remember not what was, but imagine what might never have been. And envisioning a different path life might have taken could actually help people, says research professor Sara Algoe of the University of North Carolina, Chapel Hill.

You go back through and say, "Now, imagine you didn't go to that party. Imagine that you didn't meet this person that you are with or that you love." When people do this exercise, is it the same result? Do they have a new appreciation for what they have now?

"Because they were able to recognize that it might never have been," says Algoe. "And to kind of remove all the debris and see it with a clear set of eyes."

But it's not just what we see that leads us down memory lane.

At a neurological research center in Chicago, they're studying how nostalgia can be triggered by smells. They're learning that when it comes to good memories we can be led around by our noses.

"The quickest way to change somebody's mood, state of behavior, quicker than with any other sense modality, is with smell," says Hirsch. "You smell, and you immediately decide, 'I like it, or, I don't like it.'"

In fact, Dr. Hirsch discovered that a nose for nostalgia can be a lot about geography.

When something does bring back memories, they are more likely to focus on people than, say, items like childhood toys, says Professor Batcho.

"The things that people are most nostalgic for in their growing up years were simple things like having dinner with Grandma or going on a fishing trip with Dad or going camping -- as a family... Even if it's just getting together to have a simple meal, getting together to pray or whatever those experiences are that bring a family closer to one another."

As for the children of today, ad executive Dewey says you can be certain there are things in pop culture that will likely bring back memories of the first decade of the 21st century.

"One of the big ones is this kind of celebrity paparazzi phase that's going on," he says. "The explosion of shows like TMZ, of US Weekly."

Toss in the rise of Google and the Internet, and you could just have the nostalgia of the future.

So are the stars of today likely to be the nostalgia of 10 or 20 years from now?

"Yeah. Who knows," says Dewey. "Maybe we'll remember Paris Hilton fondly one day. That would be a trick. Far beyond my means."

Now, find out how nostalgic YOU are, by taking the "Nostalgia Inventory" test developed in 1995 by psychologist Krystine Batcho of LeMoyne College. Her goal was to measure how often and how deeply people feel nostalgic. The Inventory is scored by averaging the ratings given all the items. The higher the score, the more nostalgic a person tends to be.

You can download and print out the Nostalgia Inventory form by clicking here.

"Sunday Morning" is anchored by Charles Osgood. The executive producer is Rand Morrison.