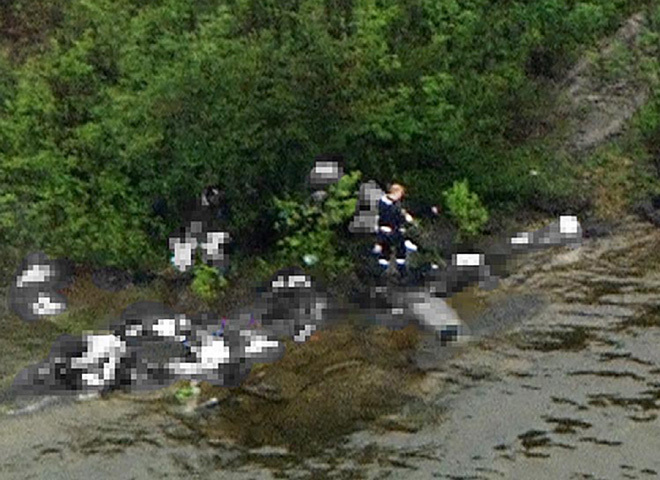 OSLO, Norway — The man blamed for killing at least 93 people during terrorist attacks on Norway's government headquarters and an island retreat for young people wanted to trigger an anti-Muslim revolution in Norwegian society, his lawyer said Sunday.

The doctor told The Associated Press that the killer's chosen ammo "exploded inside the body."

The manifesto that 32-year-old suspect Anders Behring Breivik published online ranted against Muslim immigration to Europe and vowed revenge on those "indigenous Europeans" whom he deemed had betrayed their heritage. The document said they would be punished for their "treasonous acts."

Police said they were analyzing the approximately 1,500-page document. They said it was published Friday shortly before the back-to-back bomb and gun attacks.

Breivik's lawyer, Geir Lippestad, said his client wrote the document alone. While police said they were investigating reports of a second assailant on the island, the lawyer said Breivik claims no one helped him.

The treatise detailed plans to acquire firearms and explosives, and even appeared to describe a test explosion: "BOOM! The detonation was successful!!!" It ends with a note dated 12:51 p.m. on July 22: "I believe this will be my last entry."

That day, a bomb killed seven people in downtown Oslo and, about 90 minutes later, a gunman began opening fire on about 600 young people at a retreat on Utoya Island. Police said the death toll in the shooting rose by one Sunday to 86.

That brings total fatalities to 93, with more than 90 wounded. People remain missing at both scenes. Police have not released the names of any victims.

Authorities revealed Sunday that one of the attacker's first victims on the island was an off-duty police officer who had been hired by the camp directors to provide private security in his spare time. Oslo Police Union Chairman Sigve Bolstad declined to identify the victim.

That detail sheds new light on the confusion many survivors described during the 90-minute massacre. The attacker arrived dressed as a policeman, and some campers were killed when they approached the killer thinking he was there to save them.

"These bullets more or less exploded inside the body," Poole said. "It's caused us all kinds of extra problems in dealing with the wounds they cause, with very strange trajectories."

Ballistics experts say the so-called "dum-dum" bullets also are lighter in weight and can be fired with greater accuracy over varying distances. They commonly are used by air marshals and hunters of small animals. Such characteristics potentially would have allowed the gunman to carry more ammunition and fire his weapons at varying targets without adjusting his sights.

Officials at the lakeside scene of the island shooting spent Sunday continuing to account for the dead.

Six hearses pulled up at the shoreline as orange-jacketed Red Cross searchers on small boats slowly explored the extensive shoreline.

Body parts remain inside the Oslo building, which housed the prime minister's office. In a chilling allusion to the fact that the tragedy could have even been greater, police said Sunday that Breivik still had "a considerable amount" of ammunition for both his guns — a pistol and an automatic rifle — when he surrendered.

Police and his lawyer have said that Breivik confessed to the twin attacks, but denied criminal responsibility for a day that shook peaceful Norway to its core and was the deadliest ever in peacetime. Breivik has been charged with terrorism and will be arraigned Monday.

Lippestad said his client has asked for an open court hearing "because he wants to explain himself."

European security officials said they were aware of increased Internet chatter from individuals claiming they belonged to the Knights Templar group that Breivik describes, in fantastical terms, in the manifesto. They said they were still investigating claims that Breivik, and other far-right individuals, attended a London meeting of the group in 2002. The two officials spoke on condition of anonymity because they were not authorized to speak about the investigation.

The officials would not confirm whether they had identified Breivik as a potential threat.

As authorities pursued the suspect's motives, Oslo mourned the victims. Norway's King Harald V and his wife Queen Sonja and Prime Minister Jens Stoltenberg crowded into Oslo Cathedral, where the pews were packed, and people spilled into the plaza outside. The area was strewn with flowers and candles, and people who could not fit inside the grand church huddled under umbrellas amid drizzling rain.

The king and queen both wiped tears from their eyes during the service themed on "sorrow and hope."

Afterward, people sobbed and hugged one another in the streets. Many lingered over the flowers and candles. The royal couple and prime minister later visited the site of the bombing in Oslo. The royals then visited shooting survivors at Ringriket Hospital.

The attacker picked targets linked to Norway's left-wing Labor Party. Breivik's manifesto pilloried the political correctness of liberals and warned that their work would end in the colonization of Europe by Muslims.

Such fears may derive, at least in part, from the fact that Norway has grown increasingly multicultural in recent years as the prosperous Nordic nation has opened its arms to thousands of conflict refugees from Pakistan, Iraq and Somalia. The annual Labor Party retreat — which the prime minister, Stoltenberg, fondly remembers attending in his own youth — reflected the country's changing demographics as the children of immigrants have grown increasingly involved in Labor politics.

The assaults have rattled Norway, home to the Nobel Prize for Peace and where the average policeman patrolling in the streets doesn't carry a firearm. Norwegians pride themselves on the openness of their society and cherish the idea of free expression.

"He wanted a change in society and, from his perspective, he needed to force through a revolution," Lippestad, the lawyer, told public broadcaster NRK. "He wished to attack society and the structure of society."

Lippestad said Breivik spent years writing the manifesto titled "2083 — A European Declaration of Independence." It was signed "Andrew Berwick." The document later explained that 2083 was to be the year when European government would be overthrown en masse.

Sponheim, the police chief, said there was no indication whether Breivik had selected his targets or fired randomly on the island. The manifesto vowed revenge on those it accused of betraying Europe.

"We, the free indigenous peoples of Europe, hereby declare a pre-emptive war on all cultural Marxist/multiculturalist elites of Western Europe. ... We know who you are, where you live and we are coming for you," the document said. "We are in the process of flagging every single multculturalist traitor in Western Europe. You will be punished for your treasonous acts against Europe and Europeans."

The use of an anglicized pseudonym could be explained by a passage in the manifesto describing the founding, in April 2002 in London, of a group he calls a new Knights Templar. The Knights Templar was a medieval order created to protect Christian pilgrims in the Holy Land after the First Crusade in the 11th century.

A 12-minute video clip posted on YouTube with the same title as the manifesto featured symbolic imagery of the Knights Templar and crusader kings as well as slides suggesting Europe is being overrun by Muslims.

Police could not confirm whether Breivik posted the video, which also featured photographs of him dressed in a formal military uniform and in a wet suit pointing an assault rifle.

The video contained a series of slides that accused left-wing politicians in Europe of allowing Muslims to overrun the continent. One image showed the BBC's logo with the "C" changed into an Islamic crescent. Another referenced the former Soviet Union, declaring that the end result of the left's actions would be an "EUSSR."

In London, the leader of Ramadhan Foundation, one of Britain's largest Muslim groups, said mosques are being extra vigilant in the wake of the attacks. Mohammed Shafiq told The AP he was talking to European Muslim leaders and British police about the need to increase security.

The last 100 pages of the manifesto apparently lay out details of Breivik's social and personal life, including his steroid use and an intention to solicit prostitutes in the days before the attack.

Also Sunday, police carried out raids in an Oslo neighborhood seeking explosives. Police spokesman Henning Holtaas said no explosives were found and no one was arrested.

Police said the bomb used in the Oslo blast was a mixture of fertilizer and fuel similar to what home-grown U.S. terrorists used to blow up a federal building in Oklahoma City in 1995.