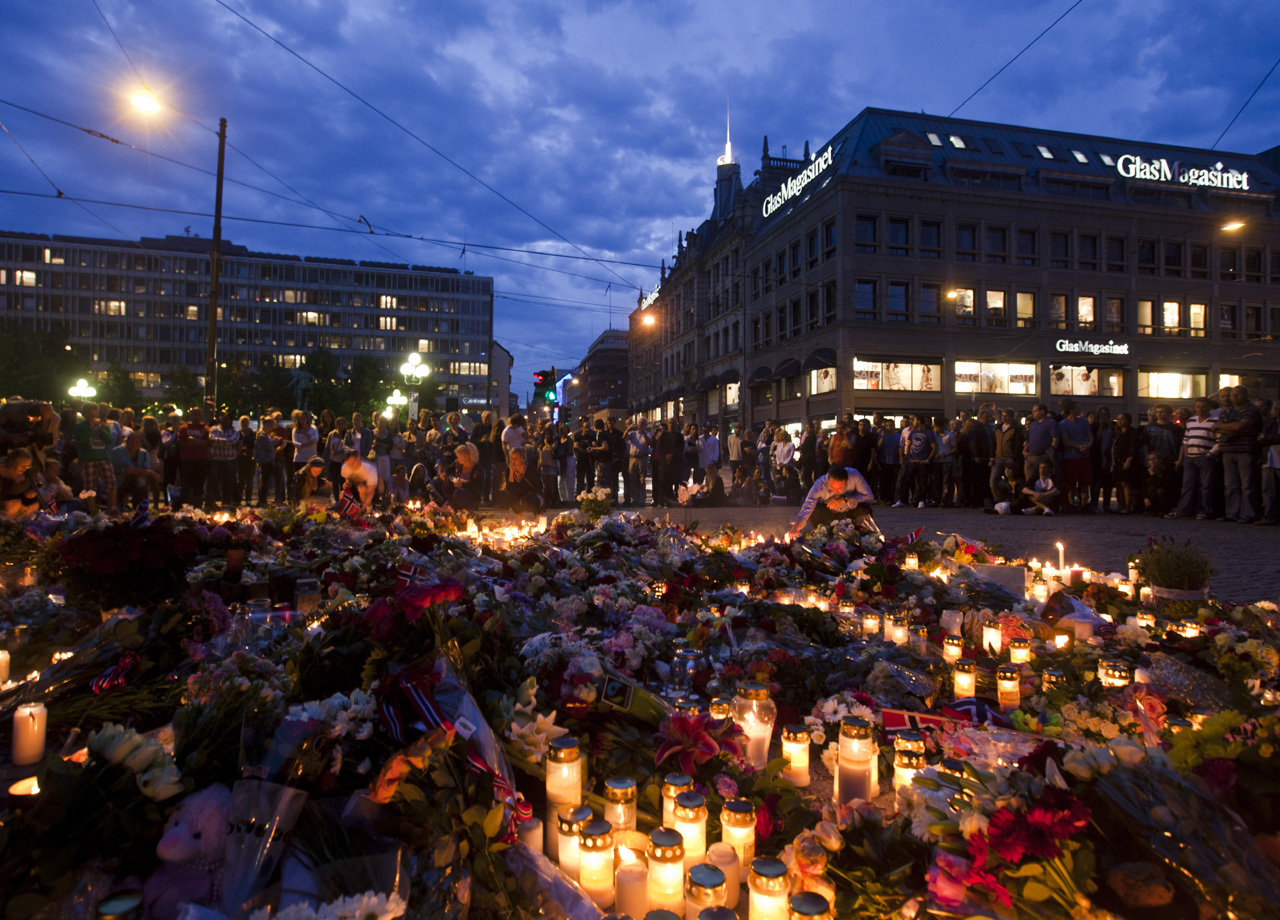 OSLO, Norway - To Anders Behring Breivik, the Norway explosion and shootings that killed at least 93 people were a "marketing method" for his manifesto, which not only lays out his extreme nationalist philosophy but reveals his attack methods and encourages like-thinkers to do their own mass killing.

Breivik describes how he bought armor, guns, tons of fertilizer and other bomb components, stashed caches of weapons and wiping his computer hard drive - all while evading police suspicion and being nice to his neighbors.

In discussing how and where to order bomb components, he said "there is absolutely NO GOOD REASON why anyone (unless flagged by the intelligence agency) shouldn't be able to acquire the above materials."

"Any single patriot who wants to establish a cell and begin action can do so, and thus becomes a part of the organisation," he wrote.

More than 90 people were wounded, and others remain missing at both crime scenes.

Authorities revealed Sunday that one of the attacker's first victims on the island was an off-duty police officer who had been hired by the camp directors to provide private security in his spare time.

That detail sheds new light on the confusion many survivors described during the 90-minute massacre. The attacker arrived dressed as a policeman, and some were killed when they approached the killer thinking he was there to save them.

Dr. Colin Poole, head of surgery at Ringriket Hospital in Honefoss northwest of Oslo, told The Associated Press that the gunman used special bullets designed to disintegrate inside the body and cause maximum internal damage. Poole said surgeons treating 16 gunshot victims have recovered no full bullets.

"These bullets more or less exploded inside the body," Poole said. "It's caused us all kinds of extra problems in dealing with the wounds they cause, with very strange trajectories."

Ballistics experts say the so-called "dum-dum" bullets also are lighter in weight and can be fired with greater accuracy over varying distances.

Police have not released the names of any victims, but they were mourned Sunday. Norway's King Harald V, his wife, Queen Sonja, and Prime Minister Jens Stoltenberg were part of the crowd packed into Oslo Cathedral. People who could not fit inside the grand church, which was strewn with flowers and candles, huddled under umbrellas amid drizzling rain.

The king and queen wiped tears from their eyes during the service themed on "sorrow and hope."

Police and Breivik's lawyer have said that he confessed to the twin attacks but denied criminal responsibility for Norway's deadliest day ever in peacetime. Breivik has been charged with terrorism and will be arraigned Monday.

Norway has no death penalty. Its maximum sentence for any crime is 21 years.

Breivik's attorney, Geir Lippestad, said Sunday that his client asked for an open court hearing on Monday "because he wants to explain himself." It was unclear whether a judge would allow the media to cover the hearing.

"He wanted a change in society and, from his perspective, he needed to force through a revolution," Lippestad told public broadcaster NRK. "He wished to attack society and the structure of society."

Lippestad said his client wrote the 1,500-page manifesto alone - though a reading shows that parts were lifted from the writings of U.S. mail bomber Ted Kaczynski. It's part anti-immigrant rant, part diary and part prediction of a judgment day.

The planning he explained in the document drilled down to the tiniest tasks. He choose a Hyundai for a trip to Prague to buy an AK-47 because he thought it was the kind of car a retiree would drive, so he probably wouldn't get stopped on his way back to Oslo. He hid most of his armor in a waterproof case underground in a forest, but a police riot officer's uniform that didn't fit was shoved into a box labeled "air soft equipment."

In near-fluent English, the manifesto is chatty, personal and even has a few jokes. Drug dealers, he noted, are the best place to go for guns. He was excited for a friend's birthday party. He feared going to Prague, but fell in love with the city when he got there, describing it as a museum - and mostly devoid of Muslims.

Beirvik pilloried what he called the political correctness of liberals and warned that their work would end in the colonization of Europe by Muslims. Europeans who might sympathize with his ideas, meanwhile, have been brainwashed into a fear of nationalism, he wrote.

"This irrational fear of nationalistic doctrines is preventing us from stopping our own national/cultural suicide as the Islamic colonization is increasing annually. This book presents the only solutions to our current problems," he wrote.

Much like the rest of western Europe, immigration has changed the demographics of once-homogenous Norway. In the past 20 years, more than 400,000 people migrated to the nation of about 4.7 million from non-Nordic countries as has opened its arms to thousands of conflict refugees from Pakistan, Iraq and Somalia. Muslims make up about 1.8 percent of Norway's population.

In London, the leader of Ramadhan Foundation, one of Britain's largest Muslim groups, said mosques are being extra vigilant in the wake of the attacks. Mohammed Shafiq told The AP he was talking to European Muslim leaders and British police about the need to increase security.

Breivik spent years writing the manifesto titled "2083 - A European Declaration of Independence." It was signed "Andrew Berwick." The document later explained that 2083 was to be the year when European government would be overthrown en masse.

"We, the free indigenous peoples of Europe, hereby declare a pre-emptive war on all cultural Marxist/multiculturalist elites of Western Europe. ... We know who you are, where you live and we are coming for you," he writes. "We are in the process of flagging every single multculturalist traitor in Western Europe. You will be punished for your treasonous acts against Europe and Europeans."

Breivik says he began planning his assault in 2002, when he hoped to raise enough money to create a foundation to distribute his "compendium," as he called the document. After dabbling in stock speculation for several years, in 2006, he decided he had enough money to write the manifesto, but not enough to distribute it.

"I will need to cut my losses and proceed to plan B," he wrote.

Plan B was a mass slaughter to draw attention to his writing.

"The actual military operation is also a sub-task as well as it is a marketing method for the distribution of this compendium among other things," he wrote.

By 2009, the compendium was complete, and Breivik started planning the attacks. He started small, setting up fake email addresses to justify an application for a fake business, Breivik Geofarm, his cover for ordering six metric tons of fertilizer - an integral component of the Oslo bomb. He rented an actual farm to carry out the final phase of his plan.

Starting May 2, he gave a daily blow-by-blow of his activities, mostly building his bomb at the farm. One of the owners of the farm nearly caught him in the act in a spontaneous visit to the farm but he persuaded her to return another day.

He advises how to avoid detection, telling his readers to cultivate goodwill with neighbors and offer visitors coffee and sandwiches as long as doing so doesn't "jeopardize the operation."

Finally, on the day of the attack, he wrote about his plan for "initiate blasting sequenses at pre-determined sites," but did not mention the island shooting that killed the most people.

Although earlier he had called the attacks a martyrdom operation and imagined his trial if he were to survive gunshot wounds, in his last entries, he makes no mention of being killed or captured. Instead, he worries how he will make pay off the debts he has acquired over the years of planning.

Breivik claims to be part of a new Knights Templar group, and he hints that there may be others waiting to execute similar attacks, though his lawyer said he insists he acted alone.

"Will attempt to initiate contact with cell 8b and 8c in late March," he writes at one point, but doesn't reference them again or explain if these are aliases.

Norwegian police declined to comment on whether they're concerned about similar attacks.

European security officials said they were aware of increased Internet chatter from individuals claiming they belonged to a new Knights Templar group that Breivik describes, in fantastical terms, in the manifesto. The Knights Templar was a medieval order created to protect Christian pilgrims in the Holy Land after the First Crusade in the 11th century.

The officials said they were still investigating claims that Breivik, and other far-right individuals, attended a London meeting of the group in 2002. The two officials spoke on condition of anonymity because they were not authorized to speak about the investigation.

The officials would not confirm whether they had previously identified Breivik as a potential threat.