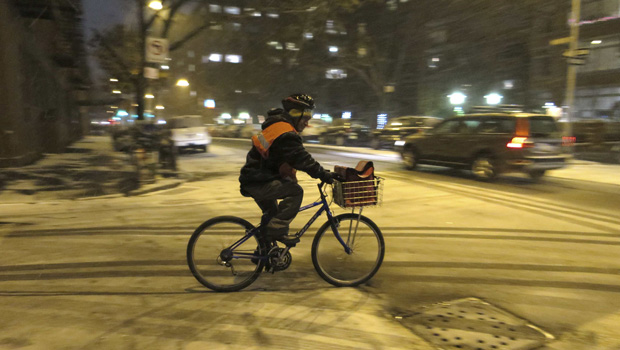 BOSTON --A strong winter storm pounding the Northeast with stiff winds and punishing cold dumped nearly 2 feet of snow in parts of the region on Thursday and threatened more.

The National Weather Service said 21 inches of snow had fallen in Boxford, just north of Boston, by Thursday night. It said parts of upstate New York had 18 inches.

The brutal weather extended Christmas break for some students while posing the first test for New York's new mayor and perhaps the last challenge for Boston's outgoing one.    Some schools in New England and New York closed well ahead of the snow, while cities mobilized plows and salt spreaders, and state offices sent workers home early. Some major highways were ordered closed and in suburban Philadelphia, a massive salt pile fell on a worker and crushed him. U.S. airlines canceled more than 2,300 flights nationwide on Thursday in advance of the storm.

Menino announced a parking ban and said schools would be closed Friday in Boston, where up to 14 inches of snow was expected. Boston's airport said it would not handle any flights after 8:30 p.m. Thursday.

"What a New Year's gift, to receive one last snowstorm as mayor," said Menino, whose successor takes office Monday.

De Blasio, who as public advocate in 2010 criticized predecessor Mayor Michael Bloomberg for his handling of a post-Christmas storm, said hundreds of plows and salt spreaders would be on the streets as soon as the snow started falling Thursday night.

"We have to get it right, no question about it," de Blasio said. "We are focused like a laser on protecting this city and getting everyone ready. We have all hands on deck."

Snow began falling overnight Wednesday in parts of New England and New York, but the brunt of the storm wasn't expected until late Thursday. Forecasters said temperatures would plummet, with some areas seeing highs just above zero and wind-chill readings of minus-10 and colder.
The National Weather Service issued a blizzard warning for Cape Cod and Long Island - where 8 to 10 inches of snow could fall and winds could gust up to 45 mph - from Thursday evening into Friday afternoon.

"We're going to see a lot of snow and a lot of wind," forecaster Jason Tuell said. "We're concerned about whiteout conditions possibly tonight with the blowing and drifting snow."

In Massachusetts, the Governor sent state workers home early, and the National Guard was activated.

Ten to 14 inches of snow are expected overnight.Gusts will reach 50 miles per hour along Cape Cod, with wind chills making it feel 10 to 15 below zero.

More than two thousand plows and salt trucks were already on the roads statewide by Thursday evening.

"We've been going pretty strong since midnight last night -  and the 'best' is yet to come," said one driver, Ed Gillen.

High tides at midnight and noon tomorrow could produce major flooding. A just-completed $700,000 seawall in the town of Scituate is already being tested by 35-mile-an-hour winds pushing seawater towards shore.

Douglass Bibule shopped for rock salt and other supplies at a home improvement store in Watertown, Mass.

"Well, there will be some shoveling that I will have to do and some sanding. I've got to go home and do some stretching exercises to make sure I don't hurt myself while doing that, and do a little shopping to make sure that we have all the supplies that we need. We need food because we have three older children at home."

Efforts were under way to get homeless people off the streets of Boston and New York City and into the safety of shelters Thursday evening. Outreach teams in New York were looking for people who needed beds in shelters.

In Boston, staff members at the Pine Street Inn were keeping the shelter open 24-hours and said they would turn no one away, even if it meant setting up extra cots in lobbies and other common areas.

New York's Long Island is one of most densely populated places in the country, with more people than in 15 states. It is expecting a foot of snow, with whiteout conditions.

The Long Island Expressway, its most important transportation artery, will be closed at midnight to make way for a fleet of plows. It is a drastic step to take for one of the busiest highways in America, but last year hundreds of motorists were stranded by a storm that dumped nearly 3 feet of snow. Many spent the night in their cars. In Brookhaven, New York, some residents were snowbound for days.

"Once the storm really starts to crank up this will turn into a plow operation," said Dan Losquandro, Brookhaven's highway superintendent. "We will be pushing all that snow off the roadways and then we will be salting and sanding sometimes tomorrow once we get those roadways clear."

New York's governor has also ordered Interstate 87 between Albany and New York City closed, as well as the stretch of Interstate 84 in New York.

A decision to reopen the roads will be made before dawn.

Sections of interior southern New England and New York state could get up to a foot of snow. New York City was expecting 8 inches, while Philadelphia could see 3 to 7.

In New York, Con Ed spokesman Sidney Alvarez said the utility was expecting the snow to be powdery rather than wet and heavy, "but with any type of snow, you're looking at extra weight on branches that can snap and bring power lines down."

"Santa brought me a snowblower, and I've got rock salt for the ice, so now I'm just waiting for the storm," Jonas Caldwell said in Toms River, N.J.

Caldwell, an investment adviser, said he could work from home if necessary, but he was hoping that wouldn't be the case.
"There are too many distractions at home," he said. "But I won't be stupid. ... If it gets as bad as they say it will be, or looks like it will, I'll be staying put."

In Chicago, CBS News correspondent Dean Reynolds reports that along the city's windy lakefront the snow was piling up for a third straight day. As the storm pushed eastward on New Year's Day and Thursday, it dropped as much as 18 inches on suburban Chicago and up to a foot on Michigan, prompting the cancellation Wednesday of hundreds of flights in and out of Chicago's O'Hare International Airport.

Below-zero cold is expected across the region over the next few days.

Travelers at O'Hare scanned the board in search of some good news, but there was not much. A quarter of the flights in and out of here were canceled or delayed.

Tyler and Angela Obradovich waited two days for a flight to Cleveland, before giving up and renting a car to drive to Warren, Ohio.

But driving was undeniably hazardous, and Amtrak train service was limited. So many including Debbie Trowbridge simply headed to the airport and hoped.

She should have been at her desk in Tampa instead of in Terminal Three at O'Hare.

"Because my girlfriends keep tweeting me from Tampa that it's about 80 and sunny there," she said.

AAA Michigan said it received 500 calls by midmorning Thursday from drivers dealing with spinouts, cars in ditches and dead batteries. Accidents and delays were also reported from Missouri to New Hampshire.

"Anything below 25 degrees and the salt isn't nearly as effective," said Becky Allmeroth, a maintenance engineer with the state of Missouri, where crews were mixing chemicals and beet juice with salt to try to make roads passable.

Authorities said the weather may have been a factor in a fatal crash Wednesday evening involving a pickup and a bus carrying casino patrons in Indiana. Police said the truck's driver was killed and 15 bus passengers were injured in the collision on a snow-covered and slushy highway in Rolling Prairie.