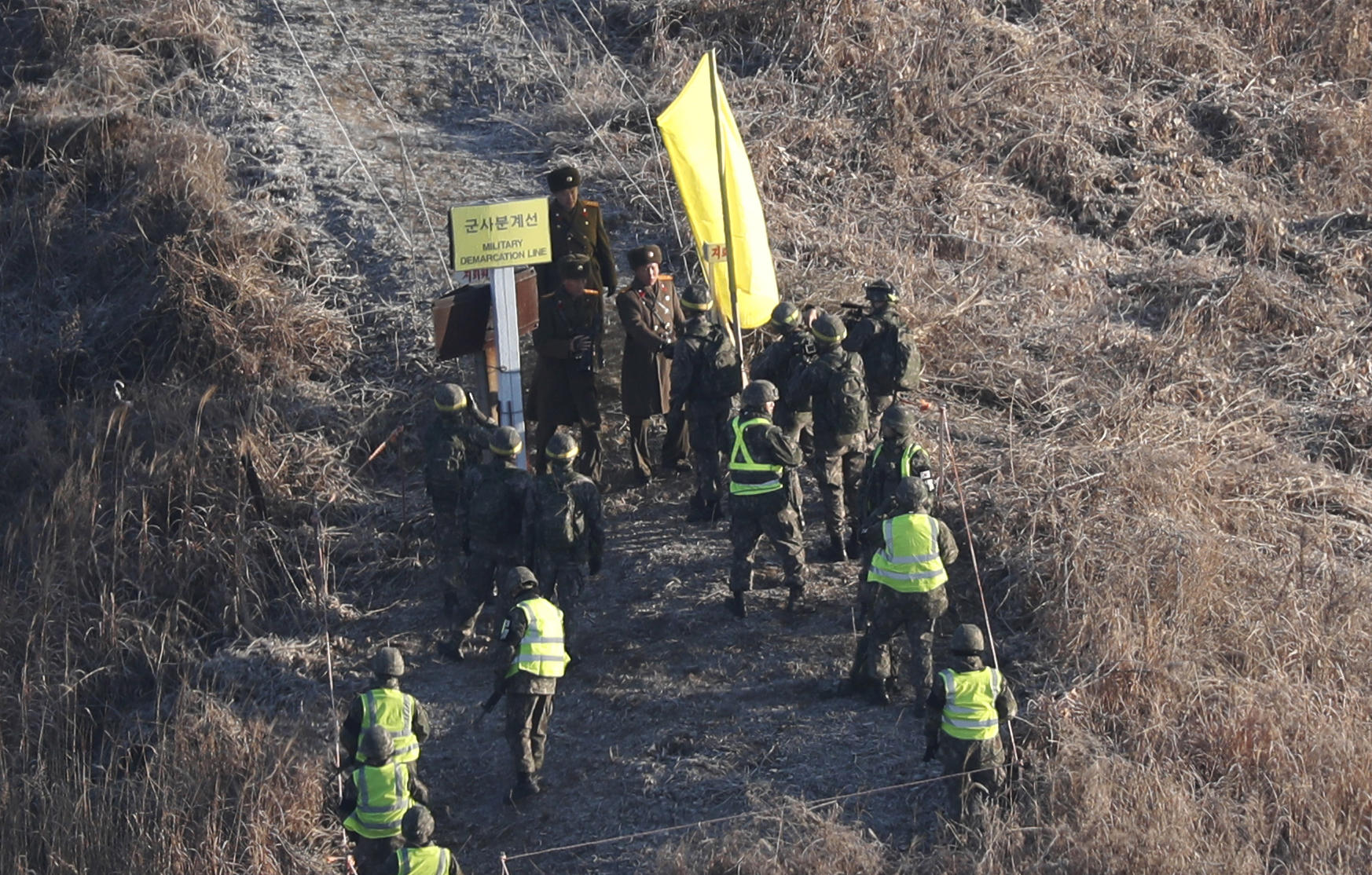 INSIDE THE DEMILITARIZED ZONE -- Dozens of North and South Korean soldiers crossed over the world's most heavily armed border Wednesday as they inspected the sites of their rival's front-line guard posts to verify they'd been removed, part of inter-Korean engagement efforts that come amid stalled U.S.-North Korea nuclear disarmament talks.

It was the first time since the Demilitarized Zone was created in 1948 to divide the two Koreas that troops from either side crossed the demarcation line peacefully, South Korea's Ministry of Defense noted.

The inspections Wednesday were mostly symbolic -- the removals will leave South Korea with about 50 other DMZ posts and North Korea with 150, according to defense experts in South Korea, but they mark an extraordinary change in ties from last year, when North Korea tested a series of increasingly powerful weapons and threatened Seoul and Washington with war.

Soldiers from the two Koreas exchanged cigarettes and chatted as they inspected the dismantlement or disarmament of 22 guard posts -- 11 from each country -- inside the Demilitarized Zone that forms 155-mile-long, 2.5-mile-wide border.

Seven helmeted South Korean soldiers wearing backpacks, one carrying a camera and another a camcorder, approached the line separating the northern and southern sides of the DMZ. North Korean troops then walked in a row down a hill to meet them. The soldiers from the rival Koreas exchanged handshakes before moving up the hill together to go to the dismantled North Korean guard post.

Other groups of South Korean soldiers simultaneously visited 10 other North Korean guard posts. They inspected whether the guard posts and any underground structures have been completely dismantled and whether all troops, weapons and other equipment have been withdrawn, according to Seoul's Defense Ministry.

South Korea's liberal president, Moon Jae-in, the driving force behind the current engagement effort, watched parts of the verification broadcast live at an underground bunker in Seoul. Moon called the work "a new milestone" in inter-Korean history that was "unimaginable in the past," according to his office.

The Demilitarized Zone was originally created as a buffer between the countries at the end of the 1950-53 Korean War. But contrary to its name, the DMZ has become the world's most heavily fortified frontier after the rival Koreas planted an estimated 2 million mines, deployed combat troops and heavy weapons and set up layers of barbed wire fences.

When the leaders of the Koreas met in Pyongyang in September, they agreed to lower military tensions along their border, including the withdrawal of some DMZ guard posts, halting live-fire exercises near the border, demilitarizing their shared border village of Panmunjom and removing mines at a DMZ area to launch joint searches for Korean War dead.

U.S.-led nuclear diplomacy aimed at stripping North Korea of its nuclear program has reported little progress since North Korean leader Kim Jong Un and U.S. President Donald Trump met for a summit in Singapore in June. North Korea has made a vague disarmament pledge, and some experts say the North's turn to diplomacy after last year's string of weapons tests is aimed at weakening U.S.-led sanctions.